Warren Duffy, the narrator of Mat Johnson’s Loving Day, is caught in the middle. The son of a black mother and a white father, Warren compares himself to a “Latvian rugby player” and describes his physical appearance as a “racial optical illusion” akin to those drawings that can look like either an old crone or a beautiful young girl. At the novel’s beginning, he’s just returned to Philadelphia from Wales to attend to his dead father’s affairs, which consist primarily of a crumbling old mansion in Germantown. He intends to stay only long enough to patch the place up and then burn it down. He’s broke and in debt to his ex-wife for a considerable amount of money. Arson seems like a solution to his problems.

Working a comic book convention to make some cash (he’s a failed artist), Warren is confronted by two strangers: one is a beautiful woman who shows up to a panel he’s on with other black artists to ask him about being biracial. He tells her he’s not biracial; he’s black, end of story. The other, Tal, is the seventeen-year-old daughter he never knew he had, the product of a brief teenage tryst with a girl named Cindy, who is now dead. Tal shows up on the rotting porch of the crumbling mansion, looking for refuge. He takes her in, and his plans change.

Convinced that Tal needs a crash course in her newly discovered heritage, Warren wants first to send her to an Afrocentric charter school, and then, when she rejects it as “too black,” allows her to attend The Mélange Center, a school for biracial people whose “goal is to overcome the conflict of binary” and to find “sacred balance” between their black and white identities.

The school’s physical location mirrors its students’ sense of cultural dislocation: The Mélange Center consists of a bunch of mobile homes illegally stationed in a public park. The Center’s very existence is provisional, dependent on a protracted court battle that cannot be won, but that keeps the school protected as long as it wages on.

Tuition is expensive, so Warren takes a job at the school teaching art in exchange for a discount. The kids at Mélange take Portuguese (the justification being that Brazil is somewhere where mixed race people will blend right in), make graphic novels about mixed race communities in history, and take a hilarious test to determine whether they’re too “black-identified” (Warren) or “white-identified” (Tal, who was raised by her Jewish grandpa). Oh, and the beautiful woman who confronted Warren at the convention is now his co-worker and teacher, Sunita Habersham.

Loving Day moves at a rapid clip as Warren tries to connect with both Tal and Sunita (albeit in very, very different ways), plot the perfect arson to burn down his dad’s decaying house, and reckon with his own increasingly muddled ideas about who he is. Identity plays a central role in Loving Day. Warren makes terrible fun of the Center, even as he’s drawn in by its promises, because he’s drawn in by its promises. Despite declaring, at the novel’s outset, that race in America is about choosing sides, about picking a team, he can’t help but notice the effect the Mélange Center has on him:

The very idea, of creating a tribe where I would fully belong, of changing my definition to fit me instead of the other way around, terrifies me. It scares me because it’s not crazy. It’s just priced at abandoning my existing identity and entire worldview.

Johnson confronts issues of identity head-on without ever coming off as preachy or didactic. Part of this is due to Warren’s first person narration: his intense self-awareness, both defensive and crippling, is the perfect vehicle for extended riffs on the performance of identity. Warren knows this particular dance better than almost anyone: he’s painfully conscious of how he’s perceived by everyone he meets. In the book’s early pages, he describes a meeting with a fellow black comic book artist:

What I’m really doing is letting my black voice come out, to compensate for my ambiguous appearance. Let the bass take over my tongue. Let the South of Mom’s ancestry inform the rhythm of my words in a way few white men could pull off.

Tal is an excellent foil for Warren’s hyper-awareness: she’s mostly clueless, unprepared for the implications of her newfound paternity, and, at the novel’s start, constantly saying the wrong thing. Her clumsiness when it comes to matters of race (her own, Warren’s, somebody else’s) compounds the inherent awkwardness of a father and daughter trying to connect after seventeen years as strangers. Through their affectionate if testy exchanges, Johnson highlights the subtle ways racism may permeate the most benign interactions.

The thorny nature of racial identity has long been a theme in Johnson’s work, and Loving Day deals explicitly with themes only ever implicit in previous works. In Incognegro, Johnson’s 2008 graphic novel, a light-skinned reporter (loosely based on the NAACP’s Walter White) goes undercover as a white man to investigate lynchings in the Deep South. In the 2011 novel Pym, a biracial academic is denied tenure because he studies Edgar Allen Poe instead of hip-hop and won’t serve on the college’s diversity committee. In these works, the characters’ blackness is never questioned; they are mistaken for white, they pass for white, but they never consider that they could possibly be white, or even half-white.

The satire of Loving Day is milder than that of Pym, and its characters’ schemes notably more realistic, if no less questionable. Unlike Pym, Loving Day has no Thomas Kinkade-esque commercial painter who creates a Biodome in the Arctic or a race of ice giants called Snow Honkies who love junk food so much that Zebra Cakes become a kind of currency. In fact, almost everything about Loving Day feels exceptionally plausible. In the era of Tumblr, where every single identity—racial, sexual, or otherwise—can be meticulously delineated, explicated, and parsed, the idea of a school dedicated to finding balance between identities (black and white) long considered mutually exclusive doesn’t seem so far-fetched, or even a bad idea. I had to remind myself, or allow Warren to remind me, that this was supposed to be crazy.

Johnson writes with startling efficiency; within the first two chapters he’s fitted Warren with a dead father, an old mansion, a long-lost daughter, and a new love interest. Later he adds possibly copulating ghosts of America’s interracial “first couple,” séances, and elaborate tattoos that make the Center’s students’ ambiguous heritage part of their flesh. It all culminates in a celebration-cum-fundraiser-cum-protest on the book’s eponymous holiday, which commemorates the Supreme Court decision in Loving v. Virginia, which legalized interracial marriage throughout the US.

Nonetheless, Loving Day, for all its lively plumbing of identity, remains a novel about parents and children. Tal and Warren, both recently orphaned, try to love and understand each other across generations and ingrained cultural identities. Warren, in turn, tries to understand his flawed and complicated parents. Johnson writes about loss with remarkable insight, about the way that parts of our history disappear without our noticing. Warren is grieving for his father, and also for his mother who died long ago, and for his ex-wife in Wales who does not miss him, and even for Tal’s mother, the girl he barely knew and hadn’t spoken to in years. While the Mélange Center focuses on finding that “sacred balance” between identities, Loving Day ends by reaffirming the humanity of all peoples, regardless of the way they present themselves to the world, or the way the world sees them.

Loving Day has been optioned by Showtime to be a television series, and reading the book, it’s easy to see why: one can imagine more for Tal, Warren, Sunita, and the Mélange Center. Johnson has created a rich world full of dramatic possibilities. It will be interesting to see how that world changes and shifts to fit a more open-ended format.

Lauren C. Barret is a writer and editor living in Portland, Maine. She received her MFA in creative writing from The Ohio State University in 2015, and a BA from Kenyon College many years before that. She tweets at @laurencbarret and tumbls only for you. 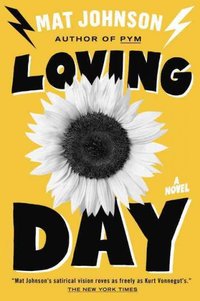