In 1969, Jane Mixer, a University of Michigan law student, was found dead: shot twice through the head, strangled, and abandoned in a cemetery. Jane was thought to be one of a series of young women murdered by a man known as the Ypsilanti Ripper, who was caught and sentenced to life in prison in 1970. However, in 2005, Jane’s family received a call from a police detective, explaining that Jane had not, in fact, been murdered by the Ypsilanti Ripper, but by another man. The detective had spent the past five years revisiting Jane’s case, and now felt that there was “every reason to believe this case is moving swiftly toward a successful conclusion.”

The Red Parts is an attempt by Maggie Nelson, Jane’s niece, to examine and understand the feeling of trading one tragedy for another, and of living with the loss of someone she never had the chance to meet. This mulling-over includes chapters of Nelson’s own life—her own “red parts”—that raise questions about inherited trauma, about unhappiness, about conflation of experience. Nelson remains preoccupied with the notion that she is not the best person to be chronicling Jane’s story—that she may not, in fact, have the right to do so— even though this is the second time she has undertaken such a chronicling.

In 2005, when the police detective contacted her family, Nelson was on the cusp of publishing a poetry collection, Jane: A Murder, a lyric response to the lingering questions surrounding her aunt’s death. “Jane is about identification, not fusion,” Nelson explains, continuing, “In the book, I don’t try to speak for her, but rather to let her speak for herself, through her journal entries.” In The Red Parts, which followed in 2007, Nelson’s voice and perspective take center stage. This new edition, a reissue from Graywolf Press, is a return to the pressing question of how to relate a true story that comes with a new preface, which asks, “What effect do years, even decades, have on a piece of writing that self-consciously attests to the turbulent, raw, and rushed circumstances of its composition and publication?”

This narrative is more reflection than investigation, peep show, or call to arms. We are invited to sit quietly with the events described, and watch them ripple outward. Nelson is concerned with the effect unanswered questions have on the soul.  She actively resists the “garish rubric” of a true crime designation, though it would be easy to read The Red Parts through that lens. While researching Jane, Nelson attempted to situate her aunt’s murder among similar deaths and found that “the problem was not too little information. It was too much.” Later, the Michigan detective would go over the poetry manuscript with a highlighter, looking for evidence he missed, corresponding with Nelson about phone calls and diary entries. His investigation ran in parallel to Nelson’s research, taking roughly the same about of time and covering similar ground. The details he’d missed were personal, familial: memories and ephemera transmitted from one generation to the next.

Nelson’s meandering style of storytelling initially reflects her urgent unease with the story, and with herself for attempting to tell it. During the trial, Nelson notes, “I try not to look at what my mother is writing down on her legal pad, but when I do, I notice that we gravitate toward the same details. And I begin to wonder it this is really her story to tell, and if I’m stealing it from her, even now.” However, the contextualizing preface, coupled with a decade’s distance from the trial, reshapes our understanding of The Red Parts. Nelson follows the loose chronology of the arrest, trial, and conviction of her aunt’s murderer, but she also amasses seemingly tangential anecdotes and observations, painting a compelling, wide-ranging portrait of the cultural prevalence of violence against women.

In The Red Parts, Nelson collects moments, and arranges them into a scrapbook of foreboding. Even dreams are fair game. Sleeping, Nelson fantasizes about confronting male violence, though the act of triumph leaves a sour taste in her mouth: “I hog-tie him and put him in a black garbage bag and go to burn him alive. I am thinking, I know this is only a dream, but am I really going to let myself do all these aggressive and violent things?” By contrast, Nelson’s mother dreams in metaphors of “impermeable, self-sufficient body, one not subject to uncontrollable needs or desires, be they its own or those of others. She dreams of a body that cannot be injured, violated, or sickened unless it chooses to be.”

Rejection or perpetuation of gendered violence permeates The Red Parts, even when the connection is not made explicit. “That means he likes you,” explains the mother of a boy throwing frogs at young Maggie’s legs. Later, Nelson recounts the experience of sitting in a movie theater filled with male film students watching Taxi Driver. They know Travis Bickle’s lines by heart, monologuing at the screen in unison, “I’m gonna kill her…” Later still, Nelson sits with her mother and grandfather at the trial of her aunt’s killer, where each must make the decision to look at the autopsy photos held up in evidence, or to avert their eyes. Her grandfather ducks his head, but Nelson chooses to look, glancing forward and away in longer increments. Her method works: “You can acclimate to it slowly. And the thing is, you do acclimate.”

Despite its critical stance, The Red Parts is no polemic. Nelson adds her own participation in a 48 Hours special on her aunt’s case to the flotilla-sized list of missing/murdered women/girls docudramas. She positions herself, there and elsewhere, as a problematic figure. She plays up what may be inherently self-serving in this whole written enterprise, writing, “Conventional wisdom has it that we dredge up family stories to find out more about ourselves, to pursue that all-important goal of ‘self-knowledge,’ to catapult ourselves, like Oedipus, down the track that leads to the revelation of some original crime.”

Catapulting herself down this track in the first place, and revisiting it a decade later in this new edition, Nelson stops short of concrete revelation. This move, this refusal to sum up her aunt’s story as lessons learned, has its own power. The Red Parts demands a reader prepared to make meaning and draw connections between “That means he likes you” and the entitlement of Jane Mixer’s killer, a man who, it would emerge, was guilty of a range of sexually predatory behavior, each instance thought to be unique, each hushed up or passed over. Nelson remains worried to the last about whether she can or should be the one to tell her aunt’s story, but the most salient and urgent observations of The Red Parts are unquestionably hers to make. The Red Parts examines a handful of dark corners in what is, at times, a violently misogynist world. These circumstances have hardly ceased to be “turbulent, raw, and rushed.” A strength of Nelson’s writing is that she is able to harness these qualities, contain them so as to tell a story that is intimately particular, and unsettlingly timeless.

Jacquelin Hedeman's work has appeared online in Watershed Review and The Manifest-Station, and on stage with Available Light Theatre. Jackie is the Reviews and Interviews Editor for The Journal, and is a contributing editor at Partisan. 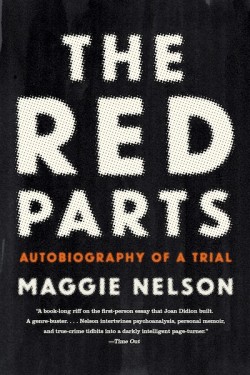