In an unbroken monologue sustained for over 80 pages, Edgardo Vega, the narrator of Horacio Castellanos Moya’s Revulsion skewers every aspect of Salvadoran culture he can summon—from pupusas and football to the archetypal Salvadoran character. Moya channels Austrian writer and luminous curmudgeon Thomas Bernhard (1931-1989), whose own style eschewed both paragraph breaks and generosity of judgment, and whose work is more often compared to the symphonies of his contemporaries than their novels. Bernhard’s Austria is a failed state, both culturally and politically, a country whose citizens cannot collectively produce a soul worth admiring. Moya’s El Salvador is no different.

Bernhard’s narrators often live abroad, are forced to return to Austria and confront their hatred of their motherland. Moya’s narrator, too, lives abroad, in Montreal. “I left,” he says, “because I never accepted the macabre joke of being destined to be born in this place.” The joke, for the reader, lies in the breathlessness of his assault on El Salvador. Indeed, it is impossible not to laugh, if only from sheer exhaustion. His indictments compound and spin out into manifestations of their own bombast. Vega tells his interlocutor that El Salvador “is a hallucination…it only exists because of it crimes.” Crimes here are shorthand for the atrocities associated with the twelve-year Salvadoran civil war. Because of these crimes, and because of the country, this slim book also exists.

Edgardo Vega lives the life of a grateful expatriate. An art history professor at McGill University, his Canadian passport immunizes him from the indignities visited on émigré Salvadorans. “Even so,” Vega says, “I came because my mother died, Moya, the death of my mother is the only reason I felt obliged to return to this filthy pit.”

Where the reader might expect an epigraph, Moya provides a disclaimer: “Warning: Edgardo Vega, the central character of this report, exists. He lives in Montreal under another name that’s not Thomas Bernhard. He surely relayed his opinions more emphatically and with more carnage than this text contains. I’ve softened perspectives that may have offended certain readers.” First published in 1997 as El asco, readers were indeed offended by its attack on Salvadoran culture and politics. Moya received death threats after the book’s release and friends urged him to remain abroad. In the afterword, he explains that his little book was conceived only as an exercise in style, a game of mimicry. He adds, “El Salvador isn’t Austria. It is a country where, in 1975, its own leftist comrades assassinated the country’s most important poet, Roque Dalton, after accusing him of being a CIA agent. I thought it would be better to go into exile than play the martyr.”

For those, Salvadoran or not, inclined to take offense, there is no dearth of material in Revulsion to do the job. Edgardo Vega’s irascibility is tireless—given a willing listener, he will bemoan “the idiocy of being Salvadoran” eternally. In the Afterword, Moya seems less concerned than amused over his countrymen’s offense. To contextualize Vega’s revulsion further, or attempt to mitigate its effects, would be like explaining a punchline, something from which Moya gracefully refrains.

The author is himself a character, present only as Vega’s silent companion. Both reporter and consummate listener, Moya sits with Vega between the hours of five and seven, in the only bar in San Salvador that Vega can tolerate—the bartender pours heavy drinks and allows Vega to choose the music. “This evening,” Vega tells Moya, “I want to listen to Tchaikovsky’s Concerto in B-flat Minor, which is why I brought my own CD with this stupendous concerto for piano and orchestra, which is why I came prepared with my favorite Tchaikovsky.” This moment depicts Vega at his least vociferous, subdued before plunging into another diatribe.

Vega is foremost paranoid. Suspicious and terrified of his countrymen, he sees everywhere “guys who were no doubt torturers and participated in massacres during the civil war.” Everyone is guilty but those who fled; namely, Vega. When Vega is generous, he’ll add Moya to his list of nonparticipants. Moya is too busy, he says, writing “famished little stories about sex and violence” to actually engage in it.

Vega’s diatribe belies his fear that he, too, despite his Canadian passport, despite his hatred of violence, is guilty of the same crimes. In order to cancel his own guilt, everyone else must be made culpable. Every bus driver, football player, and bartender is, to Vega, complicit in the most horrible war crimes. He doesn’t stop, though, with accusing citizens of El Salvador. It is their culture, too, their dietary habits, their prejudices, and their leisure activities that are responsible for the war’s atrocities. This unsparingness bleeds into hyperbole and comedy. Moya’s Vega is certainly funny, though because of the form of Revulsion, his humor is best appraised in its accumulation. It’s impossible not to laugh when everything is guilty.

The appearance of Vega’s brother, Ivo, signals the arrival of a plot to support further diatribe. Vega says of his brother, “[W]e don’t hate each other, we’re simply two planets on distinct orbits, the only thing that brought us together is the task of having inherited my mother’s house in Miramonte.” Ivo owns a chain of locksmith shops across San Salvador. An arriviste with aspirations beyond his social station, Ivo’s tastes are decidedly lowbrow. He loves football and binge drinking. He “has three televisions in his house,” says Vega, “you wouldn’t believe it, three televisions they turn on at the same time to different channels, a true hell this place is.” Here, there is a barely perceptible increase in generosity never present in Bernhard’s work, as if Vega, or Moya, is uncomfortable directing his rage at individuals.

Diatribes erect a formidable edifice in Moya’s book, but their indictments are allowed to stand unsupported. San Salvador is a stupid city. Why? Because its people are stupid. Why? Vega answers that question in a number of ways, and few of his answers are sufficient. San Salvador, he writes, is “a culture with the memory of a gadfly, crashing every two seconds against the same window glass because after two seconds it’s already forgotten that the glass existed.” Because the form of the monologue lends itself more easily to exposition than scene, Vega conveys his observations in lists, similes, and hyperbole. Anecdotes would better serve a story, but Revulsion is not a conventional story.

In the afterword, Moya notes that “the wife of a writer friend threw her copy [of Revulsion] into the street, out of her bathroom window, indignant, thanks to Edgardo Vegas’s barbaric talk about pupusas, the national dish of El Salvador.” (Vega claims that the popularity of pupusas can only be explained by “hunger and ignorance.”) Despite death threats and book burnings, Revulsion continues each year to expand its Spanish publication. Moya writes that strangers beg him to write a Revulsion for Mexico, for Guatemala, for Costa Rica, a book “that would critically demolish their country’s cultures,” that would plainly articulate their revulsions for them.

In 2016, New Directions published the book in English, as translated by Lee Klein. Nearly ten years after its initial publication, Revulsion is as timely as ever, and not only for El Salvador, Guatemala, or Costa Rica. As political backlash threatens to undo years of progressive advancement in the United States with a public resurgence of white supremacy and xenophobia, Vega’s type of paranoia is all too relevant.

Tyler Sones is an MFA candidate at The Ohio State University. His work has appeared in The North Texas Review and Us For President. 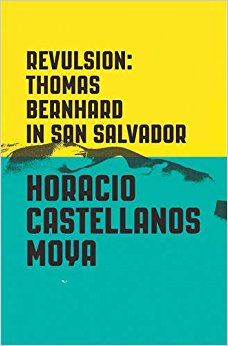