The poems in Wendy Xu’s new collection, Phrasis, are kaleidoscopic, forged of fragments.  As the title describes, these are poems of phrasis, a portmanteau of phrases and phasis—or phase. Linguistic and episodic moments of the speaker’s life are the primary building blocks in this collection, and from Xu’s combinations, the reader observes a world almost as if looking through a shattered, but still whole, window.  As the speaker of the titular poem states of “preemptive necessity,” these poems are made of “phrase[s] I’d like to unframe.” To do so, Xu contorts common phrases, moving them away from their conventions: “Happy birth upon a time, Nation!” she writes in “Task Force,” or, “in this trying, these times,” she reorders in “Phrasis.” These, however, are not syntactic games. The twisting in Phrasis is more violent, perhaps akin to “the war” of Xu’s opening poem “Recovery,” that is “a syntatactical construction pointing back to itself.”

And it is true, one feels a linguistic war in these poems. Xu routinely employs atypical sentence structures; elides subjects, verbs, objects; and uses comparative forms of adjectives when the comparison seems to be absent (for example: “I appear myself in public brimming nearer the bronze fountain” from “Music Box”).  However, in “Poem for our Fathers,” Xu concludes, “surely a face formed there / purely by will” and suddenly, it seems that instead of by violence, these poems are constructed by an act of will. Though an act of will requires determination and force, and can appear violent for those reasons, the goal of these poems is not to do damage, but to construct—as does “a face formed there”—a self.  Through language, as Xu states in “The Window Rehearses,” she is “driving both / hands into the space I / am allowed.”

In a 21st-century United States marred by war, oppression, commerce, inequality, capitalism, greed, love, lust, consumption, and technology “the space I am allowed” can be very small. To unframe the phrases and phases that appear to define one’s self, to reapportion them towards one’s own ends, is then an act of reclamation. Xu writes in “Theme Song”

the clean slate, it was only how we

Tragedy is only tragedy because we say it is tragedy. Xu resists group-defined truths, and even resists the group of “we,” writing in “Phrasis,” “I / am telling you I speak from the representative we but / do not fill me in.” The individuality of the speaker continuously revolts against being defined by mere kinship to others. For this reason, relationships are hardly places of stability, and overflowing New York City provides an oppressive background, where only occasionally does the speaker experience such luxuries as quietly watching a boat come into harbor. One of the greatest tragedies in Phrasis is, on the train in “Five Year Plan,” to “worry a stranger’s / jutted hip and miss / that country view.” In the same poem, Xu also writes, “Out all day I wish more bars / and restaurants unto nobody.” Urbanity, and its twin, technology, strangle the mind. In “Some People,” Xu writes “Something I thought / today was system error” and in “Phrasis”—of herself? of a beloved?—“After a particularly long period of hermitage / you reek again of industry.”

In “Diagonal Sun,” the speaker simply exclaims, “I wanted so bad all that rustic shit.” But when, in “The Forecast,” “leafy nouns” appear, something like solace might emerge from language. The poems of Phrasis are filled with references to the mechanics of poetry: lines, white space, verbs, nouns. They are works of determination to write the self into a fragmented world. Not to defragment it, but rather, as Xu writes in “Phrasis:” to “refer… to the self in thirds, he there of the bent / frame, she shaded in multiplicities of orange, red,” because in divvied-up people, sewn together by color and frames, is reality.

Jake Bauer serves as Poetry Editor for The Journal. His poetry has been recently published or is forthcoming in Forklift, Ohio; Threepenny Review; Thrush; DIAGRAM; The Bennington Review; Poetry Northwest; and Inter|rupture; among others. 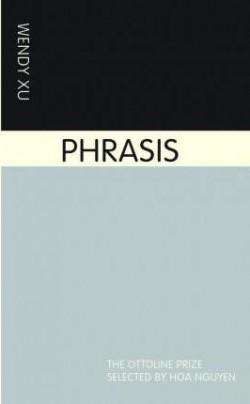