Joy Grace Chen: Most of the poems in Sky Country have a clearly identified narrator, and I think it is only in section II that the speakers remain relatively nameless and faceless. Who did you imagine to be the narrator(s) in this section? I was also wondering if you could talk more about the process of writing about the concentration camp in Utah. Did it require any research?

Christine Kitano: The speaker in the second section is an imagined character, loosely based on my grandmother. I imagine her as a young, first-generation Japanese American immigrant, who leaves her home country in search of a better life, only to have that life upended by the WWII incarceration. My family was incarcerated at Topaz Concentration Camp in Utah, so I set these poems there. Initially, I did a lot of research (including reading personal remembrances by my father) to find out details about camp life. But when I started writing the poems, I had to let go of the research and trust the voice of the speaker.

JGC: Something that I personally am very interested in, as a second-generation Chinese American who has lost most of her Chinese language skills, is the role that language and bilingualism play in cultural assimilation or, conversely, in cultural displacement. I love your poem “Persimmons,” which ends with the lines “Persimmons / the word in the only language I own.” Were you ever bilingual? How has your relationship to language informed your sense of identity? And how has it informed your writing?

CK: I wish I were bilingual. My mother is a first-generation immigrant from Korea, so she spoke to me in Korean when I was growing up. My father, however, as a second-generation Japanese American, only spoke English. So it was difficult for me to maintain a grasp on Korean, since the primary language in our household was English. And after moving away from California, I began to lose my ear for Korean. But growing up in this way helped me understand how language works from an early age. I knew that language shaped the way a person thought, and that there are words in one language that will not translate to another. My mother would often complain that English was inadequate. From there, I deduced that language itself is always inadequate, but the poet’s job is to manipulate it to communicate that which cannot otherwise be communicated.

JGC: In a Poets & Writers feature, you described how you use translated poems to inspire your own work. Could you talk a little more about this process and, if this applies, how it shaped some of the poems in Sky Country?

CK: I find there’s a different texture in poems translated into English. I always begin a writing session by reading other poems, and there’s something about the slight strangeness of a translated poem that I feel opens my brain in a different way, that allows me to approach language from a different perspective. Many of the poems in the second section of Sky Country came from reading translations of Eastern European poets (Wislawa Szymborska, Anna Swir, Paul Celan), poets who suffered through the worst of history. Though my subject matter was different, I still learned a lot about how to describe suffering from these masters.

JGC: I read in a recent interview that you are working toward a collection of short essays. What drew you to begin writing creative nonfiction? How do you think your poetry informs your nonfiction, and vice versa?

CK: I had started writing creative nonfiction when writing Sky Country. The longer prose poem sequences (“Sky Country” and “A Story With No Moral”) began as creative nonfiction essays. But I still felt more comfortable working in a poetic mode, relying more on imagery and paratactic association rather than narrative to tell the stories, so they ended up as prose poem sequences instead. But I want to learn how to craft an essay. Writing is writing, and there are definitely similarities between a poem and an essay, but ultimately I see essay writing as a challenge to myself to learn something new.

JGC: What is one valuable piece of advice that you think more emerging poets and writers need to hear?

CK: The work itself is the reward. Especially with social media, it’s too easy to feel like you’re falling behind or not measuring up with someone else who got that great publication, fellowship, residency, etc. The cure for this, at least as far as I can tell, is a steady writing practice. When I’m working (and through this work learning more about my craft), the external validations hold much less power. 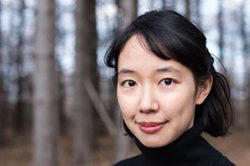 Christine Kitano is the author of two poetry collections, Birds of Paradise (Lynx House, 2011) and Sky Country (BOA Editions, 2017), the most recent of which is reviewed in this issue of The Journal. A graduate of the PhD program at Texas Tech University, Kitano is currently an Assistant Professor in the Department of Writing at Ithaca College.