Any reader of poetry is familiar with the way theme constellates across a book, building a product that is much more than the sum of its parts. And yet each time I read Kathryn Rhett’s Immortal Village, I remain amazed: this collection manages something I haven’t witnessed before. Although initially Rhett’s use of theme seems familiar, she gradually intensifies the repetition of phrases and ideas until they become the driving force of the lyric’s “narrative.” Repetition acts as a wormhole in space-time, allowing the reader to exist in several moments, and poems, at once.

If that sounds complex, Rhett’s technical control of language makes it simple. Recurring phrases such as “white nightgown,” “with a war on,” and “lay down some” send the reader forward and back across the collection, like a wind stirring chimes at every house on the street.  Consider the use of repetition in “Slip”: “But it’s always 1776. / It’s always 1972. / We’re always wearing white nightgowns. / He’s always saying, let me / tell you a story / In a confiding tone / And the story will always destroy us.”

Amidst the revolving themes of art, family, and selfhood, the collection relies on the narrator’s voice as a constant. This allows the poems to take risks they would not otherwise be able to. The poems can move seamlessly from moments in the narrator’s childhood to moments spent with the narrator’s own children. The book inhabits many spaces, including but not limited to a honeymoon apartment in Mexico, a cornfield outside a juvenile boys’ home, the Uffizi Gallery, and the glass airspace above San Francisco. Literary allusions add another element of depth, spanning from Elizabeth Bishop to Gerard Manley Hopkins to Gothe. Rhett understands how to arrange image against image, text against text, in a way that brings out the best qualities of each.

Rhett comes to poetry from prose, having previously published two books of nonfiction; as such, the ease with which she builds character in these poems comes as no surprise. What truly astounds, however, is the superb musicality with which she manages the task. These poems are driven by sound, and Rhett is masterful at pacing. Her narrator is recognizable by voice and breath alone, as in “In Bed”: “If only you would with your hand / cover my mouth, lay down some violence / like what we watch with satisfaction on TV— / lay down some violence against me / while we wait for / death what what they say we’ll get.”

Rhett is able to alter tone without rushing the reader, even—and especially—at moments when the poems intensify. Each line is given appropriate time to reverberate. The poems are resolute, uninterested in softening the world. But despite that darkness, there is delight in each turn of language, each time a sentence manages more than it rightly should. For example, from “Book of Hours”: “The child growing larger by the hour, as if birth were endless. / She traps her small flying hand with her mouth.” In this manner, Rhett’s poems alchemize joy where the reader least expects it. The collection is as energizing as it is precise, and the ideas continue to echo in the reader’s mind long after the book is closed.

Although this is Rhett’s first full-length collection of poetry, its finely-tuned craft speaks to her years of experience. She is able to transform the ordinary over and over, making a mythology which becomes larger than even the immortal village or the richly painted angels. At a time when literary forms continue to be more hybrid, this collection is a model of how a book within a single genre can innovate through cross-genre technique. Rhett’s whirled collage, her balance of characterization and lyricism, and her musicality make this book a true wonder. The magic of Immortal Village is subtle, but I have the feeling this book is a preview of literary conventions to come—and what a future that promises to be.

A.E. Talbot is a native of Downeast Maine and Managing Editor of Off the Coast. Her poetry and nonfiction have appeared in Mid-American Review, Day One, and elsewhere. Find her on Twitter @AETalbot. 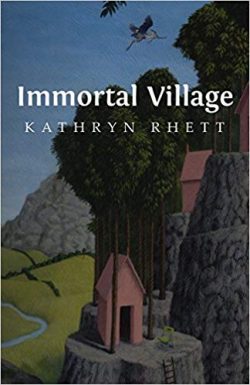