Welsh-American painter Jeni Bate’s Skyscapes for the Soul combine the delicacy of wet-on-wet watercolor, the richness of acrylic, and the crisp edges of collage. She has dubbed this signature technique “refractured watercolor,” and we were drawn to the dynamic textures and tensions it creates. As she works, Jeni also composes poetry, which she incorporates into the final images.

Art Editor Elizabeth Blackford reached out to Jeni to discuss her paintings, her poetry, and her process. 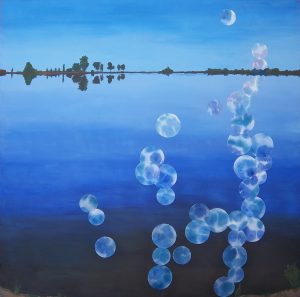 Elizabeth Blackford: One aspect of these paintings that drew us to them is your “refractured watercolor” technique, which brings delicately blended watercolor in tension with collage and acrylic. You mentioned in your bio that “a series of errors” helped you to develop this method, and it seems to me that watercolor is a medium in which working with “accident” is especially important, given that washes and color bleeding create some of its most unique and beautiful effects. Could you discuss what drew you to watercolor, and how you developed your signature technique?

Jeni Bate: I was at the beginning of studying art, a watercolorist. Most people think of it as the hardest medium, but for wet-in-wet creation of soft clouds, it’s the easiest. The acrylic (and I work separately in oils too) came later. The errors I made were actually of planning, not of painting. I joke that I got where I did by “three mistakes and a theft.” The first mistake was painting on palm bark because you can’t put a hook in the back to hang it. So I cut them down a little and put them in shadow boxes. That was the second mistake, they didn’t look good. I gave up on the palm bark and was left with a stack of shadow boxes kicking around the bottom of the studio. Wanting to find ways to a) combine different mediums in my work and b) use the shadow boxes, I decided to paint a watercolor skyscape background and put it in the back of the shadow box, and do reverse glass acrylic painting in the front, for a foreground. The third mistake was that on the second one, I was cropping an 18×24 watercolor down to 20×16 and drew the lines on the back. When I cut it and turned it over, I had a bloom on one edge. I thought, “oh and the other side’s perfect and I’ve cut it off, I wish I could take that side and put in on the other side.” Then the penny dropped, and I sliced up the watercolor and rearranged it. Loved the effect and have been doing it ever since. 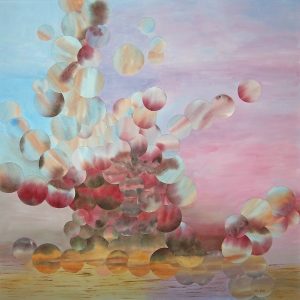 EB: You also mentioned that you borrowed the term “refractured” from quilting. Could you speak more about the relation between your watercolor technique and the craft of refractured quilting?

JB: Here’s the “theft” part of “three mistakes and a theft.” I needed a different word for my process, because it isn’t exactly collage. Most collage artists will get their materials from photos, magazines, other paper pieces; I create my materials by painting entire paintings. I was originally calling it “watercolor collage.” Then about 2 years in, I was doing an art fair and the quilting convention was in the same town. Every fourth woman who walked in the booth said, “Oh, this is like refractured quilting.” So I asked what that was. Apparently, they quilt the same quilt several times then cut it in pieces and quilt it back together again. (OK, so at least I start with entire paintings….) But I liked the word, so I stole it. I had the term recognized by the international Kolaj magazine out of Canada at the end of 2016, though I’m still waiting for it to get put in Wikipedia or even a dictionary.  As for me and quilting? I’m only licensed to reattach a button and fix a hem. 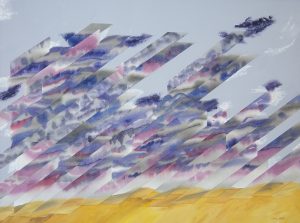 EB: We were also intrigued by the way you incorporate poetry into your work. The poetry that you write for each painting is fairly hidden in the final image, and most viewers may not even notice it. Could you tell us a bit more about how you work these words into your paintings, and the role poetry plays in your composition process?

JB: I’ve been writing poetry since I was 7—it’s one of the thing that the Welsh are known for, and I’ve performed on the spoken word scene in LA when I lived there. When I moved to the desert, I had no outlet for the poetry, so I quit writing for a while, but the desire was always there. For some reason I was thinking about one time a group of us had been invited to write poetry about art in a gallery. So I decided to repeat the process with my own work. I usually write the poem after having completed the refractured watercolor part, then paint it in watercolor. Sometimes I forget this step and it has to go on in acrylic later. I like to hide the poems in the clouds so that if someone loves the painting and doesn’t care so much for the poem, they can stand back and ignore it. I like to think that the poetry morphs the painting from a meditation to a guided meditation. Also that it gives me a way of communicating what I was hoping the viewer will get from the painting, without disallowing them from getting something else entirely (which happens with most art work!). I figure I have to tell about 90% of the people that there’s poetry in the paintings. Sometimes people will stand outside my booth looking and say they want to see the paintings from a distance. I invite them to come and look closer afterwards otherwise they’re missing the best bit.

EB: What drew you to the sky as a subject?

JB: It’s where we live. We just live there at ground level. It is our first, our next, our last breath. It is the most important part of our world, the most changing, the instigator of most physical changes. And the weather is always in the news coverage. Ancient Romans regarded the hour before dawn and after sunset as holy hours separate from the rest of the day; we still connect with that feeling. Most people enjoy a beautiful sunset and those that rise early enough, a beautiful dawn. Clouds are much maligned bringers of unpleasant weather, but rain is a necessary part of the ecosystem and the clouds that bring them can be a beautiful composition of art.  In the early 2010s, a photograph of me as a child about 4 years old resurfaced – I had been painting at my little easel and the painting I had completed was a sky. The photograph triggered the memory that most of my childhood paintings looked that way, a massive sky with tiny mountains at the bottom: the passion to create skyscapes had been with me from the start. I felt that it wasn’t so much as choosing skyscapes as a subject, but that skyscapes chose me. Another early childhood painting joy was paint by numbers, where I wondered, if you can get landscapes and seascapes and cityscapes, why can’t you get skyscapes? 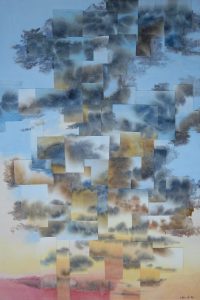 EB: What would you hope a viewer might take from your work?

JB: A peaceful feeling. We have such busy lives these days, there’s so little time to stop and go outside to watch the clouds crawl by, contemplate joy, pain and nothing, and rejuvenate our souls. I think I mostly succeed in this. Many people comment that they get a feeling of peace walking into my booth.

EB: Is there anything else you’d like to add?

JB: One of the other things that I frequently have to show people is the amount of texture in my work. When you get oblique light across the surface, the cut watercolor shapes really pop out. I have one that recently someone was contemplating from a distance – the painting was in the shade – and he thought it was just a mass of blue and red clouds. When I brought it into the sunlight it was, “Oh wow, there’s a bunch of butterflies in there!” Another aspect that’s not obvious from photos is that with six layers of acrylic glaze, you can also touch them. How many watercolorists do you know that you can see and feel the texture in the work?

Sometimes I am asked, what is the “style” of my work? I don’t know of anyone else who is working quite this way at that moment, nor have I met anyone that does. The refracturing is reminiscent of the way that humanity understands something in two ways: when we look at a scene, we don’t look at the whole thing at the same time, we look at this bit and that bit here and there; also when we try to understand complex systems, we usually do so by breaking the system down into constituent parts that we can understand individually, then piecing it back together again. I had the opportunity a couple years back to run the question by someone who has a masters’ in fine art history. She first explained orphism, a circular offshoot of cubism (which we all know from Picasso); then she concluded that my style is somewhere between third-generation orphism and unclassifiable. That’s right where I want to be.

Jeni Bate lives in Salton City, California—though she grew up in Wales. As a child, she enjoyed painting, but as a teenager art gave way to academics. In 2001, Jeni was working on photography but soon had an epiphany: “Now you have to paint!” The sky is her primary subject—both now and in childhood paintings. Jeni began painting in watercolor, subsequently adding acrylics and oils. A series of errors progressed into her signature refractured watercolor technique. She later met quilters who likened her reorganized images to “refractured quilting,” so she stole the word. As the years have progressed, she developed her technique to meld acrylic with refractured watercolor and frequently adding poetry, written for and included in the painting. Her work continues to inch to the more abstract.

One of the things that allowed Jeni to develop her voice quickly was having teachers who taught materials handling and composition, but not style; why, not just how. These are important aspects of her teaching.