Scott Brennan’s photography focuses on the urban landscape, reframing evocative settings and objects to capture moments of beauty and humor. We were struck by the quiet power of these images and are thrilled to feature them in Issue 43.2. Art Editor Elizabeth Blackford reached out to Scott to speak with him about this series. 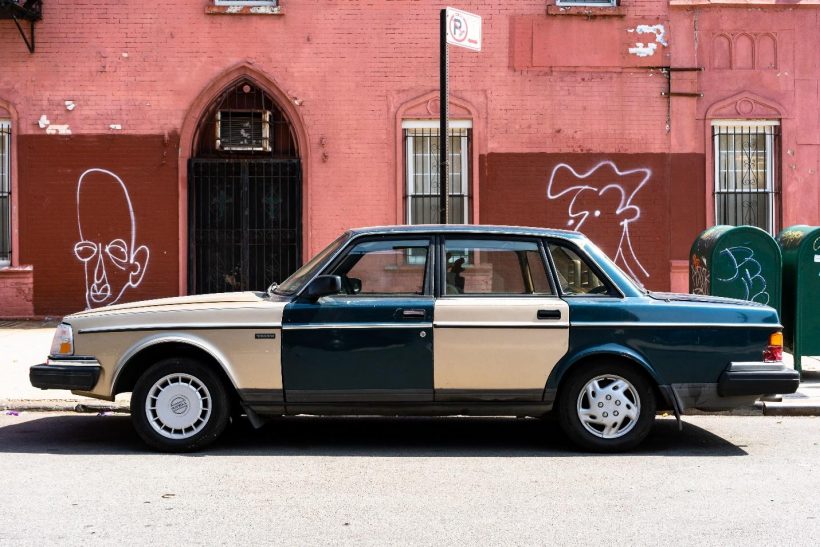 Elizabeth Blackford: One aspect of these images that immediately drew us to them was their bold, dynamic composition. These photos have a very strong formal sensibility, but the subject matter—junked and repaired cars, murals and graffiti, decapitated trees—also evokes something like narrative, or perhaps simply personal history. Could you speak a bit about your process, how you compose an image, and what inspires you to capture it?

Scott Brennan: I spend a considerable amount of time writing, drawing, and painting, all indoor activities that involve staring at a piece of paper, a computer screen, or a canvass. To liven things up, I like to take walks. A while back, to amuse myself, I began to take photographs along the way, and doing so became more and more interesting. The work of William Eggleston and his idea of photographing democratically intrigued me when I began to teach myself how to use a camera. He put forth the idea that everything, no matter how mundane, is suitable subject matter for a photograph—no single thing more important than another. Taking walks and trying to see things in the world democratically freed me from some of the constraints of the indoor work. Because I live in Miami, I began to photograph things typical of the urban environment.

I think perhaps my experience with painting, drawing, and illustration, which is traditionally limited to a rectangle or a square surface, helped me understand how to compose a photograph. Looking through the viewfinder of a camera also provides one with a frame, and as with painting and drawing one needs to make decisions about what will and what will not go within it. The fun of photography, as it pertains to my process at least, is that I place myself in locations and situations in which I need to quickly process visual information that presents itself to at me random. There is no time to think; there is only time to see and react—and that’s also quite freeing. I also like following my intuition, which doesn’t rely on words or ideas, and to wander any which way without a clear purpose in mind. I generally listen to music on my AirPods while I shoot—maybe something post-punk like Swearin’ or alternative like Rachel Angel or Kurt Vile, and I like to wander into places I am not necessarily supposed to be. It might be in a warehouse district, an edgy part of the city, along the highway, in a parking garage at night, or in an abandoned building. Bending or sometimes breaking rules seems to sharpen my awareness, attitude, and eye. Though I don’t know how my aesthetic evolved, I try to take well composed, aesthetically pleasing, “beautiful” photographs in interesting light of things not normally considered worthy or beautiful subject matter. Maybe there’s a tension between the subject matter and the manner in which it is presented in the photograph? Certainly there’s some irony, though I am not sure what the purpose of it might be, other than to make some sort of social commentary. As with my drawing and paintings, I tend to work rather minimalisticly, which might lend itself to symbolism and nudge the photographs toward narrative. 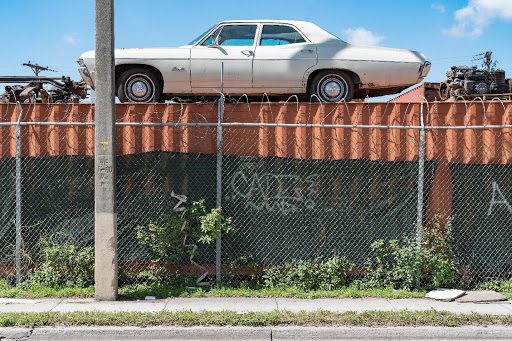 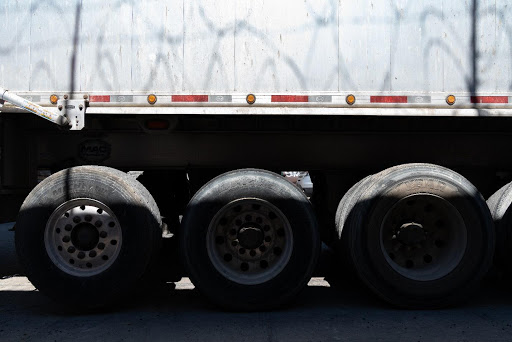 EB: Despite the urban setting and the signs of human use on the objects you photograph, no actual people are present in these images. For me, this lent them a lonely quality; the signs of human intervention in the landscape made human absence that much more palpable. Why did you choose to omit people from these photos?

SB: I believe it is possible to hypothesize that photographs of the built environment—of things human beings have constructed or altered over time—can say as much about people as a picture of a man or a woman on the street does. An image of a person possesses a range of possible facial expressions and emotions, an individuality expressed by clothing, hair style, age, ethnicity, gender, class, situation, and so on, but images of individuals are in some ways perhaps less revealing of a culture, or reveal important but incomplete aspects of a culture, but not the culture in its entirety. The works of human beings—a bridge, a street, a building, or an automobile—can say a good deal about a culture in its use of materials, design, function, form, color, state of upkeep, signage, and sheer presence. Urban landscape photography is uniquely able to capture the human presence, the effects people have on the landscape, without the information within the image being overwhelmed by the presence of an individual personality.

The photographer Henry Wessle, Jr. said, “I don’t go out looking for pictures. I go out, and if something catches my eye, that’s reason enough to photograph it.” I agree with Wessle’s sentiment. That said, I do see trends in my work. I seem attracted to scenes and situations that not only reveal the human presence upon the landscape, but also the consequences of time, and perhaps this combination contributes to the lonely mood you detected in the photographs. 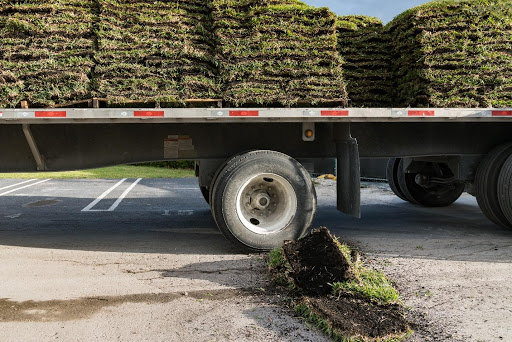 EB: Several photos in this series include imagery commonly associated with American identity; for example, the stars and stripes in Tire, or the sod in Sod Delivery Truck, which is reminiscent of pristine suburban lawns and landscaped office parks. Could you tell us a bit more about what interested you in these particular images?

SB: I think both Tire and Sod Delivery Truck have a few things in common. Tire features a painting of the American flag on a cinderblock wall, but the painting is executed rather crudely, as there are too few stars, the blue rectangle is out of place, and the stripes are out of proportion. There’s a quaint, folk art quality to the wall painting, a genuine enthusiasm in it, and I found the imperfections fascinating. I normally would not have photographed it (I generally don’t like to photograph murals or graffiti so directly), but the way the shadow fell conspicuously upon the wall, and the way the discarded tire leaned against it—well, all the elements seemed in the moment to hint at a narrative I could assemble within the viewfinder.

Sod Delivery Truck also seems to play with ideas of perfection and imperfection, as well as with symbolism and narrative. Sod is used to create supposedly perfect, uniform, orderly spaces that to my eye seem overly manicured and artificial, especially when compared to wilderness, which of course is not nearly so tidy. The photograph pokes fun at ideas of order, control, and perfection, and at the way people try to engineer their landscapes, and, by extension, their lives. Doing so seems a particularly American impulse to me. As a sort of personal aesthetic, I never plan what I photograph in advance, and I take the photographs opportunistically, when I come across something interesting, in the moment. Sod Delivery Truck is one such example. Overall, though, I think both photographs possess an element of social commentary in them, as well as a bit of humor. 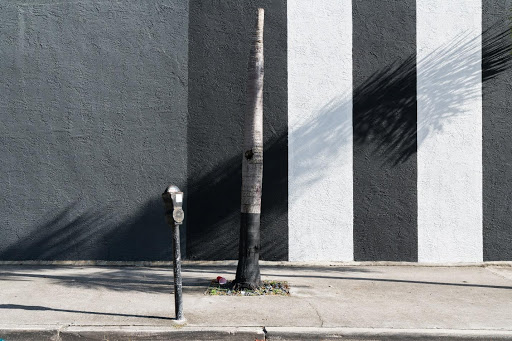 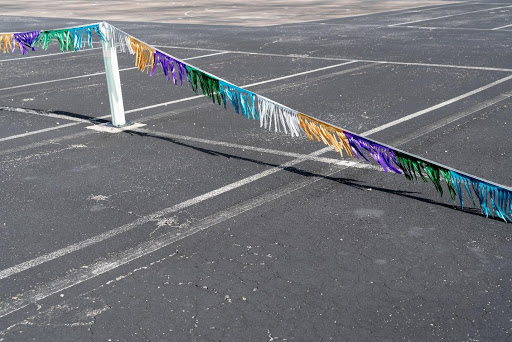 EB: Another aspect of Americana that spoke to us in these images is the notion of car culture. Many of these photos depict automobiles; most of them aging, in various stages of brokenness and repair. These cars almost seem to stand in for their absent owners, and there is a certain pathos in seeing a car like the Chevrolet Bel Air perched above what may be a junkyard. What attracted you to cars as a subject matter?

SB: Automobiles are ubiquitous, and modern society has engineered the environment to accommodate them, so it stands to reason that urban landscape photography inevitably needs to take into account the presence of them. After all, there are over a billion cars in the world. In 2018, 74 million were added to the billion. In 2019, an additional 80 million will be manufactured. Who knows how many have been produced in the 100+ years since Henry Ford opened his first assembly line factory? All automobiles will eventually break down and need repair, and all will eventually be beyond repair and need to be recycled or discarded. Cars in photographs serve as great markers for not only a specific moment in time, but also the passage of time, itself, as styles and technologies evolve. A photograph of a 2019 car on a city street today might not seem interesting in the present moment, but 25 years from now both the car and the photograph may look vintage, might even be tinged with nostalgia, as the Chevrolet Bel Air sitting on top of the shipping container does. 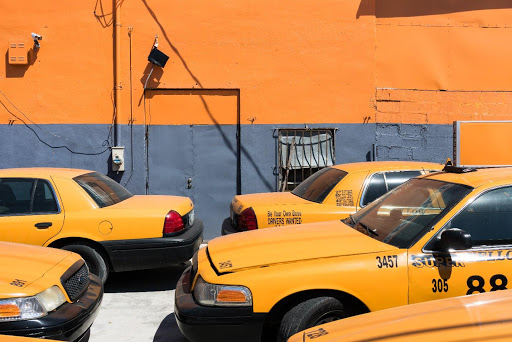 EB: Your photography seems to focus primarily on urban landscapes, and you mentioned in your submission that you have explored ubiquitous urban fixtures such as parking garages and pay phones in other bodies of work. What is it about cities that inspires you?

SB: For one, I live in a big city, Miami, and I have spent a good deal of time in New York over the past few years, too. The city is the landscape I inhabit. Yet, at heart I am an outdoorsman, and I spent eight years living in Vermont, where there is better balance between human beings and the natural world. I think the New Topographics photographers of the 1970s, as well as William Eggleston, who expertly photographed the banal and quotidian, inspired me to consider the urban landscape as worthy subject matter. Urban landscape photography reveals the uneasy tension between human-made things and nature. There are endless details to notice within the city—sometimes with appreciation, sometimes with revulsion, and sometimes with wry humor. A walk through an urban neighborhood, an industrial zone, a parking garage, or a commercial area reveals damage, decay, renewal, and repair. Always one sees the slow abandonment of the obsolete, the concrete and the cars. Yet, oftentimes the urban landscape, even in its most banal or blighted state, possesses a quiet beauty. Like all landscapes, it remains subject to the timelessness of light and shadow the photograph preserves and makes visible.

Scott Brennan is a photographer, writer, and educator living in Miami, Florida. His work has been exhibited in a number of venues, most recently at the Swenson and Audrey Love galleries. His writing and photo essays have appeared in a number of magazines, including Smithsonian, the Berkeley Journal of Sociology, Harvard Review, the Carolina Quarterly, and elsewhere. He is an associate artist at the Bakehouse Art Complex as well as a member of the Void Projects Photography Collective in Miami.