Chet’la Sebree’s Mistress is a stunning debut that features a series of persona poems written in the voice of Sally Hemings. Sebree brings critical fabulation into the poetic discourse by constructing these poems using both historical record and imagined interiority. Throughout the collection, Hemings reckons with her past and sits in conversation with contemporary black women. Selected by Cathy Park Hong for the 2018 New Issues Poetry Prize, Mistress is a cross-generational conversation that uses the body to trace a linage of enslavement and degradation. Transposing history onto the contemporary, Sebree’s must-read collection scales time and geography, building an ancestral conversation between black women who are eternally in search of freedom and agency.

The front cover and title page, designed by Rebecca Schaefer, immediately orient the reader to the time warp that’s to follow. Reminiscent of 19th century frontispieces and portraiture all the while highlighting contemporary undertones—the front cover is an intimate close-up focusing in on an ear, pointed outward with intention. It serves as a calling to the reader to both listen to and reckon with the past about to be presented in the pages to come.

“Mistress” itself is a loaded term carrying many weighted definitions and perceptions throughout history. Sebree circles around the many fraught definitions in order to further complicate our understanding of the word. In poems like “Mistress of the House” and “Mistress of Hypermobility,” Sebree presents “mistress” as matriarch, as home builder, as dominatrix, as world traveler, and as educator. Sebree relentlessly threads this term throughout the book, ensuring that the reader doesn’t simply dismiss the label as immoral or, even worse, ignore the person behind the term. What do women gain with the label and their positionality? What do they lose? By returning over and over to these themes, Sebree complicates perceptions of black women’s desire, sexuality, and agency.

The book itself is split into three sections, each one furthering the notions previously presented. This allows Sebree to create a text that’s layered, weaving themes across generations. A great example being Sebree’s piece “Extraordinary Privilege, August 1792.” The words originally presented in the piece by Madison Hemings make their way back into the text a few pages later in the final lines of a piece entitled “Contemplating ‘Mistress,’ Sally in 2017.” This masterful weaving of theme and time is accentuated by Sebree’s range and precision. From an erasure piece that uses text from Stephen O’Connor’s novel Thomas Jefferson Dreams of Sally Hemmings to a piece that repurposes words from Thomas Jefferson’s 1785 Notes on the State of Virginia, Sebree propells the reader to sit with history in new ways. Stand out poems from the collection include “Je Suis Sally, August 2017” and “Ab Hinc (or, Sono Chet’la).

As a quasi-appendix, Sebree reveals a four-page timeline of the Hemings and Jefferson family-lines featuring fifteen people and spanning centuries, from 1735-2018. This paired with the notes section are a testament to the extensive research that went into the creation of this book. What’s even more impressive than just how meticulous Sebree’s research can be, is how well she manages the release of her knowledge onto the reader, making history feel both accessible and personable. Every poem leaves the door slightly ajar so that the reader can go learn more, while also hitting an emotional truth that rings timeless. This interiority is a fresh way of honoring history, and Sebree’s execution is a sign that she’s a master of both language and craft.

There’s no doubt that Mistress sits within a long linage of talented texts that work to insert interiority into a historical arena where black bodies are traditionally viewed as pawns instead of humans with dignity. From William Wells Browns’ fictional representation of one of Thomas Jefferson’s enslaved daughters in Clotel to Toni Morrison’s more contemporary fictional retelling of family history in Beloved, Sebree’s Mistress shows the reader how to reckon with a past and move forward into a future.

An impressive debut, Mistress is a bold reclamation of history, one that blurs genre and time and challenges the antiquated perceptions of the black female body and desire. Released October 2019, copies are now available here.

﻿Kortney Morrow﻿ is an emerging writer and editor from Cleveland, Ohio. Her work has been featured in ﻿The O, Miami Poetry Festival﻿ and ﻿MACK﻿ by Raptor Editing. She is a Winter Tangerine Workshop alumna, and is currently pursuing her MFA in poetry at Ohio State University. 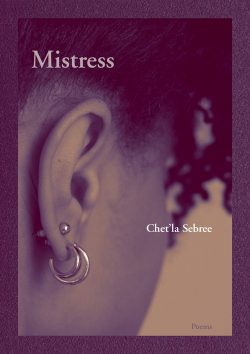