The title of Rainie Oet’s forthcoming “memoir in verse,” Inside Ball Lightning, is a good indicator of what to expect from the poems within — they enter suddenly, through an open space, and electrify us.

These poems feel totally fresh: their presence on the page alive, crackling. They draw us in with the familiar, and then we are blinded, suddenly, in the glow of flashbulb memories rich with sensory detail and striking emotionality.

“If you see ball lighting, run/ because it can go through a/ window, any window,/ and erase you,” reads the introduction to Home Video Tape. The quote is attributed to “Mama,” and drives home a main theme of the book: the erasure of self, of others — of erasure and apparition both, through the strange twisting of memory.

Erasure of Mark, a poem haunted by plains of white space, reads: “I’m hitting/ Mark’s surface/ Mark opens/ I fall in/ closes/ trapping me./ He kisses/ water:/ waves./ Mark/ is small/ “No.”/ Mark/ is dark.” These visions swell into a common memory, a feeling of loss.

Oet, the author of three other books of poetry, traces this loss through the mist-paths of their childhood. In spiraling patterns, we experience their relationships with siblings, the roots of their family, and the gradual gathering of a separate self.

Trauma passed through generations is cut through with concrete nostalgia — Neopets, Digimon, and the Powerpuff Girls all make appearances here. The imagery, both odd and recognizable, pulls us in. “A phone rings. Zafara/ leaps out of the computer/ and asks to be fed:/ “It’s been over two years./ I’m dying, I’m dying.”’

Within these pages is captured a kind of permeability in space and time that is both disorienting and fascinating. There is a sort of dream logic present — memories blend with reality. The voice shifts from Oet to their relatives – in one example, to the perspective of the father as a child. We are floating, in a sense, through the malleable past.

In the poem I’m Lost Inside a Folding Cube, Whose Sides Withdraw and Reinstate, Float Dust in Light, (a wonderfully descriptive title) Oet writes, “I make myself go back in time to 1970 and tell little/ Papa, then little Mama:/ “You’re okay, you’re okay, it’s okay, you’re okay./ Don’t disappear like you’ve been disappeared on./ Please.”/ And they don’t, and everything is different.”

How beautiful, how strange, is this doubling back of time — this ability to revisit scenes of one’s own past, or to confront others who have shaped it?

Even past the last full poem, the book continues to surprise. There is a “notes” section, which provides space for additional observations, snippets, and anecdotes which enrich the experience of reading the poems, as well as an appendix, titled Ghost Cams.

The narrator recounts their “obsession” with the ghost cams of the “early internet” — watching and refreshing “online video feeds constantly connected to the world’s most haunted places — library, mansions, hospitals, parking lots.” We’re also treated to descriptions of some of the cameras and their contents, including one which tricks the viewer into thinking they’ve finally caught sight of a spirit.

There is a subtle grief in this — a feeling of disconnect. The narrator glimpses the beginnings of things, but doesn’t quite catch their endings. They are watching from a distance, both connected to the subjects of their viewing and removed from them. “I wonder if they know the ghost might be around them right at this moment, floating some erratic path through their bodies, connecting them like dots to a curving line. No, they can’t possibly know.”

Oet also provides space for their family members to respond to the work. Mark, their sibling, says, “Inside Ball Lightning is the exploration of the questions we ask ourselves as we grow up and re-remember: What happened? Who am I?”

In Inside Ball Lightning, Rainie Oet collects the fragments of many lives and weaves them through with thread. They press together dreams, memories, bonds — and from them pulls a unified energy.

Inside Ball Lightning will be available from Southeast Missouri State University Press in March of 2020.

Cameron Gorman is pursuing an MFA in poetry at The Ohio State University, and holds a B.S. in journalism from Kent State University. Cameron is currently an associate poetry editor for The Journal and an editorial intern for New American Press. 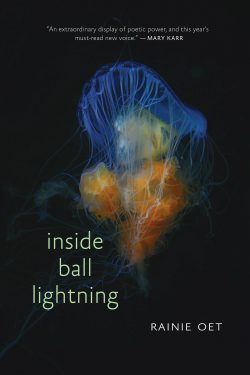