Throughout I Hold a Wolf By the Ears, Laura van den Berg’s new collection of short stories, the reader finds bits of evidence that something devastating has happened. “The bartender asked me to tell him my story, and I describe the places I have lived. Eight cities in 10 years. Many different jobs. Few possessions or attachments. I’ve had some drinks. I go on. ‘You on the run from something?’ the bartender asks. ‘Yes,’ I say, without hesitating.” These clues point to some missing piece at the center of these stories, and make the stories feel like mysteries. The reader’s primary interest, however, is not in solving what has happened, but in watching how the characters maneuver the fallout of their tragedies.

Like its characters, the stories revolve around some avoidance or failure. There’s a train that never comes, a doomed last trip, children that do or do not appear, absent sisters, and impersonators of the living and the dead. In each story, characters want to deceive themselves, believing that they can evade their problems. “I did not want to confront whatever was happening in my neighbor’s apartment; I only wanted to get away.” These characters close their eyes against what haunts them in a desperate attempt to persevere. “[The hypnotist] believed with all her heart that something unspeakably awful had happened to me and that my memory had concealed this awfulness, in an attempt to save my life, and that this unprocessed trauma was the source of all my troubles. After she said this, I refused to go under hypnosis. My commitment to the truth simply did not run that deep.”

These are case studies on the difficulty of holding pain in perpetuity, the way it “wants nothing more than to destroy your life.” The collection forms a catalogue of living with trauma, of finding a way to survive with one’s grief. “I considered the possibility that our thoughts were the most important thing to know, because they made up the stories we told ourselves about the world and our place in it, what was possible and what was sacred and what was forbidden.” The lives, and in fact the very worlds, of these characters deform to accommodate what has become forbidden and sacred in the aftermath of devastation.

To avoid their pain, characters repeatedly escape into the safety of other lives. “I cannot deny that I have always enjoyed being other people.” Inhabiting the lives of sisters, in particular, echoes throughout the book. The characters mirror and merge into the personas of their sisters, perhaps like how the sisters of trauma and grief, or the sisters of devastation and self-destruction sometimes merge. “I find a pair of opal earrings on [my sister’s] dresser, next to a photo of my sister and Pat. They are on a beach in southern Maine, smiling wide. I put the earrings on and I am surprised by their weight. [Their] bed is unmade. I get under the sheets.” Other times, characters try to evade pain by obliterating themselves. In the title story, a character hands over her passport to hotel reception and “thinks about how happy she would be to leave the woman in that picture behind.” When one of the many therapists in these stories asks how a new coping method is going, the protagonist explains, “I felt obliterated,” then clarifies, “I told her it was working.”

Of course, just like in life, ignoring and denying their pain only worsens the lingering effects for these characters. “Grief, especially when it was not properly tended, could turn even a reasonable human being hostile and confused.” And, as another therapist says, “that which cannot be forgotten must be confronted.” But gore is hard to look at, and these characters have a relentless aversion to contending with their pain. In one story, a character admits she is being abused, but then takes it back. When later explaining why she retracted her admission, she says, “I wasn’t ready.” But once acknowledged and named, there is no way of really denying truth. “Once you have a thought like that, there is no turning back, there’s only pretending to.” And that pretending has reverberating repercussions. “I didn’t yet understand that refusing one kind of narrative could activate another.”

I Hold a Wolf By the Ears is riddled by its characters’ trauma and grief. The reader watches the characters maneuver the complicated task of living with their ghosts, sometimes closing their eyes against them, sometimes approaching the lurking shadows. “I thought the universe had granted me a chance to remake my life,” a character says. Later, she laments, “As it turned out, I have been doomed to live the same old story, with the same ending.” These stories examine characters as they try, fail, struggle, and persist against their histories. And the reader joins them in their grief, knowing that there is no simple escape from this kind of monster. “I hold a wolf by the ears. She’d understood the phrase to mean something along the lines of—there is no easy way out.”

Katie Pyontek writes poetry, fiction, and nonfiction. Her work has been published in New Ohio Review and Poetry. She is an MFA candidate at Ohio State. 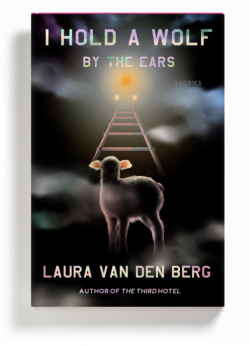