“I thought/ surely I will die, so much of me/ outside of me and still more/ leaving,” Leila Chatti confesses in the title poem of her shimmering debut collection. Afflicted in her twenties by a uterine tumor that caused her to bleed without stopping – to flood, as physicians described it – Deluge dissects her experience and the places it overflows into gender, desire, illness, and faith with intimate lyricism.

Chatti’s unflinching perspective throughout the collection is striking. She refuses the impulse to shy away from what history names shameful or taboo, instead looking at both her body, and outside responses to it, without blinking. A number of poems illuminate her experience with medical treatment where Chatti delves into multicultural responses to illness, which range from religious shame to the callous indifference of the U.S. medical system. In The Handsome Young Doctor, Who is Very Concerned, she describes one visit to us:

“…I say I’ve read
this is dangerous. He says, impassive, of course,
everything has its risks.
Already checking the time on his wrist.”

Equally searing is her tangled and dynamic exploration of faith, in which ruminations of the body and health bleed over to the topic of desire. What sets Chatti apart is how deftly she balances feelings of defiance and isolation with real and searching devotion. From the first poem, Confession, the character of Mary from the Holy Qur’an is developed as a woman whose embodied experience plays out parallel and inverse to Chatti’s, immaculate conception counterpoint to barren flooding:

(oh Mary, like a God, I too take pleasure
In knowing you were not all
Holy, that ache could undo you
Like a knot)—

The investigation and questioning of Mary braided throughout Deluge positions Chatti in the tradition of Mary Szybist’s Incarnadine and Marie Howe’s Magdalene, but with her distinctly brave, taut language and narrative stream. Intertwined with explorations of Mary are Chatti’s own direct addresses to God, such as in one of the Annunciation poems: “If there/ is something you need/ to tell me, God, you must/ tell it to me/ yourself.” By repeating titles like this—Annunciation four times and Deluge twice—the poems take on a nearly liturgical quality, an echo like prayer.

The poems are masterfully ordered, often flowing directly into each other. For example, Zina closes with the lines “each time he touched me/ anew as though making me/ with his own two merciful hands” while the next poem, Nulligravida Nocturne, opens with “He touches me,” perfectly stair-stepping from one piece to the next. Similarly, the conclusion of Hymen, “and that’s the heart/ of it, isn’t it? Of a woman, you/ the only blood worth anything” transitions skillfully into the next title, The Blood. Beyond the linkage from page to page, Chatti crafts a narrative that is both personal and historical, spiraling inward. While she lays herself bare with the defiant vulnerability of her narrative, the collection wraps itself, almost comfortingly, around the reader, layer after intimate layer through the ripples of repetition. What the poem Tumor does formally, circling the page, the collection executes on a larger scale, gaining nuance with each recurring motif, confession, and doctor’s visit.

Contributing to the sensation of blanketing layers is the often-present darkness in the collection, presented not as fearsome, but consoling. From Night Ghazal’s repeating “black” and the redacted words in Etiology to Metrorrhagia where her partner Henrik gardens, “thumb turning in black/ soil. Birds scattering, spotting the dark,” Chatti’s is an interior, embryonic darkness. Where other narratives search the shadows of the foreign, Deluge is an exploration within the poet herself, a quest that is physical, spiritual, and emotional.

Cumulatively, Deluge’s chiaroscuro calls for healing and empathy from the darkest of places, to find a kind of frightening beauty in even a grapefruit-sized tumor. With her ability to land unerringly on what feels like the perfect word and a nearly primordial sense of embodiment, Chatti offers a collection that will linger within readers.

Arah Ko is a writer from Hawai'i. Her recent work has appeared in Fugue, Ruminate, Rust+Moth, and New Reader Magazine, among others. She is an MFA in creative writing candidate at The Ohio State University in Columbus. When not writing, Arah can be found correcting her name pronunciation or tending a jungle of house plants. Catch her at arahko.com. 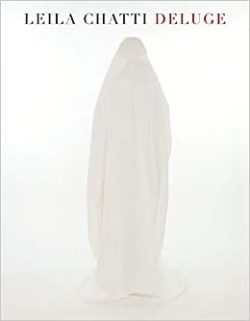