Sebastian Castillo, a Philadelphia-based fiction writer, teaches creative writing at Temple University and at the University of Pennsylvania. His short story “The Cigarette Painter,” was the runner-up of BOMB’s 2021 Fiction Contest and appeared in that magazine’s winter 2022 issue. His second book, Not I, was published by Word West in 2020. Castillo spoke with me over the phone about his recent publications as well as his work in progress. The following interview has been edited for clarity and concision.

Grace Tessier Culhane: One thing I’m noticing about Not I is how much is happening off the page. You’re trusting the reader with a lot of negative space. What led you to make that decision? What’s changed about your expectations for the reader [since publishing 49 Venezuelan Novels in 2017]? Or has anything changed?

Sebastian Castillo: I’m not so sure, because a part of me in the moment of composition only thinks of myself as the reader. I don’t ever conceptualize a phantom future reader, so a lot of those questions fall away or seem less pertinent. I’m just trying to make a compelling experience for myself, both as a writer and a reader.

With that project, and that book in particular, I was thinking about the limitations of what the speaker could say. I was thinking about what they weren’t going to say about themself, or the supposed self, which was suggested with all these first-person declarations. But sometimes I make what the speaker says contradictory. I sometimes suggest a narrative attitude that is then interrupted by non sequitur. So there’s a kind of “there and not there” quality.

GTC: I was struck by its algorithmic quality, the way the statements lull you into a false sense of randomness only to mess with that. I was wondering if you could talk about the work’s relationship to technology, if there is a relationship.

SC: I don’t think there is. But I would say that in terms of questions regarding the algorithm and thinking about procedure and the work, I had the structure first. Before I even wrote a word, I already knew what the book was going to be like. When I was doing research, I looked up, “What does somebody study when they’re trying to learn English grammar, whether it’s for a high school class or a second language?”

I kept seeing this list of tenses in the order that it’s presented in the book. I wrote the book linearly from the simple present to future perfect continuous.

Then as I was editing it, I kept thinking, “What’s the actual experience of going through all these tenses?” A lot of the time in the early part of the book, I wanted to have a quotidian, almost universal quality to all these statements. And then as the book proceeded, I wanted to push against what someone would naturally say in the English language. In terms of writing it, the first draft came out quickly, and then it was really the editing that took most of the time.

GTC: I experienced it as a story. Were readers meant to take that away from it?

SC: Yeah, I wanted it to have a kind of momentum in that sense. I remember when I first talked about it with a friend, he called it a novel, which I thought was hilarious because I didn’t think of it as a novel at all—it’s so short. But I was pleased by that characterization because, especially in the last section of the book, I wanted to gesture at and at the same time push away closure. But that gesture is there. I didn’t want it to be totally anti-climax. I did want to feel like there was a rhythm or a pressure that was building.

GTC: I’m looking at the end now. [You write], “I have been saying pithy aphorisms for the sake of genius.” Is that the climax?

SC: Yeah, I wanted this narrator to be both pitiable, someone you can have sympathy for, but also kind of ridiculous and bathetic. I’m looking at the last page: “I will have been feeling like it didn’t come out right / I will have been trying despite this / I will have been leaving the book on your desk.” This feeling that as much as all of these systems of language allow one to communicate a self, there’s still this kind of lack, or this incompleteness, of not getting it quite right. Which is one of the reasons each tense is repeated twice. I wanted there to be the suggestion of, “I’m gonna say it once and get it right, but no I didn’t, so now I have to say it again.”

In the book there’s an epigraph by Ron Padgett quoting Gertrude Stein. Someone asked her, “Why do you always repeat words?” And she said, “Well, you say something you like, so you say it again.” What I found extremely funny was that despite my best efforts—I even had a friend help me—I couldn’t find the Gertrude Stein quote. Either he made it up or misremembered. I found that really satisfying.

GTC: Can we talk about “The Cigarette Painter”? I was thinking about all the artists that come up throughout the story, and this idea of the randomness of violence and the randomness of despair. I have a broad question, which is, what do you think art’s role is in creating or imposing a kind of meaning on that randomness?

SC: There’s an ability in narrative — and maybe this is one of its false comforts — to create an arc that to some degree systematizes or explains those modes of violence so that they can be given a category and therefore understood. I think at the same time, there’s the ability to demonstrate how unsatisfying that is. Things that are violent in that nature do just happen without a reason, without an explanation, without even really any consequences whatsoever.

[“The Cigarette Painter”] culminates in this stranger entering the house, which coincides with the intervention that’s happening for the father character. [The intervention] is supposed to be this revelatory thing that’s happening. Then it’s punctuated by a random act of violence, and it’s over with. Nothing comes of it. Nothing is satisfied. And all you really have is the memory of it happening.

GTC: Do you want to talk about your process a little bit? Where do you start with a piece?

SC: The thing I’m doing now, a novella—I did a lot of outlining in terms of the story itself. There’s a bit of an Oulipo-style constraint. I’ve done constraints before, but in terms of story planning, I’ve never done anything like what I’ve done with it. I usually just go from a rhythm, with a feel for where the story might end up. I wanted to do something a little more schematic or planned.

I’m on the third draft now. My hope is to finish it soon. But that’s something I like about writing. I can create these conditions for every new thing. Especially with longer, book-length projects, I like to create a different way of tackling it that makes it interesting.

GTC: It feels like a lot of your previous work is defined by a kind of restriction or a constraint, and it sounds like you’re moving away from that with your novella. Is that a permanent shift? Or just the mood you’re in?

SC: Well actually there is a constraint in this book! It’s written in small chapters, and with every chapter there’s a system in how many characters the narrator can talk to per chapter.

I’ve always been drawn to the Oulipo writers. Everything they did, even when they wrote about very serious things, feels animated by a sense of mischief. There’s this real spirit of fun and mischief in their books. It’s a way of getting at a project, rather than just sitting down and saying, “I want to write about loneliness.” I don’t have much to say about loneliness, but I could probably make some weird game out of a book.

GTC: Are you reading anything good right now?

SC: I’ve been reading more plays in the last few months than I ever usually do. I’ve been reading everything from classical dramas like [Heinrich von] Kleist and [Georg] Büchner to more contemporary things, Caryl Churchill and some of Thomas Bernhard’s plays, and — I’m not sure this even counts — the scripts from Seinfeld. The second half of the novella I’m writing is written like a play, and I wanted to immerse myself in some of that writing. I was interested in how you get things moving beyond expository writing, where it’s really relying on simple movement and dialogue. I just really wanted to get into that energy.

GTC: I’m excited to read it. Thanks so much for taking the time to talk.

SC: Thank you! Thanks so much for reading my work. It was a pleasure.

Not I by Sebastian Castillo is available for purchase through Word West. His first book, 49 Venezuelan Novels, is available here.

Grace Tessier Culhane is an Ohio-based fiction writer. Her investigative journalism has appeared in Vice. Her arts reporting has appeared in Willamette Week and the East Bay Express. She is currently at work on a novel about DoorDash delivery drivers, cultists, and Angelenos. 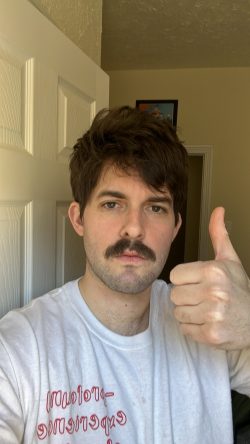 Sebastian Castillo is the author of Not I and 49 Venezuelan Novels. He lives in Philadelphia, PA.