Sumita Chakraborty’s debut poetry collection, Arrow, is a sprawling expanse of loss. Centering the story of her sister Priya, Arrow is both a testament and letter to her sibling —who died at age 24—as well as a record of the poet’s large and undefinable grief.

The collection is richly inhabited by figures from mythology: a vast array of flora, fauna, and strange objects—orchids, hurricane plants; bees, sarcophagi; fish, bleach; rose bushes; tulips, irises, stags. They permeate the imagined landscape of the poems. The subject of death, ever-present, raw, and real, is encased within fables and stories so the speaker can interact with the painful reality of mourning through a prism of make-believe. Many laments — direct references to death and violence, particularly against women in both existing myth and invented story — spill out with singular focus, as if the poet cannot avoid thinking and speaking about them. Hands, tongues, heads of people and objects are cut off: blood, asphyxiation, shrieking, sacrifice. Although there are attempts at resurrection and renewal, Arrow does not take the easy way out by offering the clarity of healing or time—even at the end, “we arrow from times of grief into—well, into more such times” (75). Sections end with a sense of arriving, emotionally, right back where we started.

“Dear, Beloved,” by far the densest poem, is composed of one continuous stanza of long lines, a lyrical and painful crux of the book. The worldbuilding brims with energy and expands outwards, even as it never veers from the central theme of death. It forms a microcosm of the book as a whole: pain, guilt, anger, and grief’s circular, non-linear shape. It opens with hypothesis: “It would be winter, with a thin snow. An aged sunbeam / would fall on me” (22) and describes a mountainous landscape envisioned by the speaker, where most of the poem takes place. Unlike the real world, here, her sister is present: a living and breathing character in a bleak fairy tale setting. Tied to this world, we see the speaker in deep turmoil: imagining the self as “some fantastical beast with eyes / lining the inside of my body (26),” confessing desires to die in multitudinous ways, only to be amended; “I did not want to die, but I wanted to want death” (26). The speaker’s grief appears in many ways: complicated by guilt, helplessness, inevitability.

This struggle is especially heartbreaking considering the admission towards the end of the poem that “I am lying to you” (32). Tension and tone quickly ramp up: “It was a sky in which every child of every star, / living or dead, could be heard humming” (28). These images—sky, child, humming, living versus dead— are heightened and strengthened through a repetition of loose, gauzy imagery. The ending’s rich language pulls everything together, collecting and funneling into one bottlenecked explosion — a space where she and her sister exist together.

Chakraborty’s work is a study in repetition, in returning. Every recurring thread—ash, singing, hum, lullaby, vegetation, deer, dear, doe, children— is further deepened through layers of meaning, contradiction, and re-definition. Even its title, “Dear, Beloved,” plays on these different associations — and on the meanings of her name: Priya.

At times throughout the collection, the speaker addresses us as readers — but we sense that, despite this, she speaks only to her sister. Readers, along with other secondary characters in Arrow, are just overhearing. Chakraborty uses images that are terrifying and brutal (incision, ash) yet delicate and moving (moths, stars); precise in their meaning, yet, like most moments of intense human emotion, containing a multitude of conflicts and contradictions. Opposite feelings coexist, fighting each other for space in excruciating relentlessness. “Yes, there is much to love about the body. / Too, there is much to hate” (24). We encounter such immense detail that we find ourselves reading everything many times, carefully, to see the whole multi-prismed painting.

Arrow deals with all these particulars of emotional turmoil even as its centering pull is one of grief. It’s not for us to know the origin of every struggle — for them to be named — but we witness the narrator’s pain, both emotional and physical: senses that cannot be separated from each other. “Sister, could I find you on that horse mountain? I wonder / if I want to. Have I made this world?” (27). Moments like this frank confession remain shrouded; we’ll never know the entirety of what the speaker feels. Perhaps the speaker does not either. Neither purely narrative nor image, and never resolving through its very nature what cannot be resolved, Arrow requires us to hold both truths: there is some meaning to grieving, and there is nothing to be gained from it. The poems in Arrow are a mastery in re-definition – they are kaleidoscopic. The refrains presented in this collection leave their tracks all over the speaker’s mindscape, creating a world of tragedy, memory, danger — and some small amount of comfort.

Arrow can be purchased from Alice James Books for $17.95.

Maya McOmie is a bilingual and bicultural poet from Tokyo, Japan who writes about identity, language, and memory. She holds an MFA in Creative Writing from the Ohio State University. You can find her on Twitter at @mayamcomie. 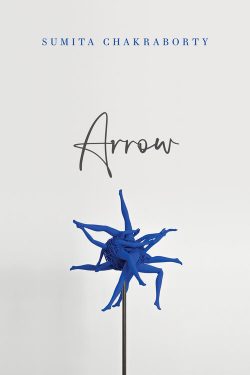