“I have sweetness too, just underneath thicker rinds.” (131)

In the acknowledgements for her short story collection BLISS MONTAGE, author Ling Ma cites film critic Jeanine Basinger as coining the book’s title term. Basinger’s 1993 work A Woman’s View: How Hollywood Spoke to Women, 1930-1960 details a phenomenon in film of a woman’s briefly allowed period of happiness before the movement of the plot inevitably invites heartbreak. The audience, Basinger argues, has only a passive engagement in women’s joy, and the “Happy Interlude” or “Bliss Montage” serves only as a prelude to her far more interesting trauma.

The Bliss Montage is a flattening technique, a refusal to recognize a fulfilled woman as complex and whole but to instead portray her as an object upon which the world must inevitably shape a recognizable narrative. But Ma’s characters continually break from their assigned roles and emerge raw. In “Los Angeles,” a woman lives in a sprawling house with her stock Husband and one hundred ex-boyfriends, including an abuser. She luxuriates in her mansion and her adoring suitors while navigating the complexities of victimhood: How does one own their narrative without being reduced to it? In “G,” an Asian-American woman uses an invisibility drug to ease the pressures of moving through her world in a non-white body. “I have done so much G that my adult sense of self formed in the complete absence of my reflection,” the narrator says. “For a person like me, that’s a certain kind of freedom.” (50)

The women in Ma’s stories are constantly changing, shifting and adapting to their world. Her first novel, SEVERANCE (2018), told the almost eerily prescient story of a woman continuing to work in a country shut down by a pandemic. The book was praised by author Jia Tolentino, who called it “the best work of fiction I’ve read yet about the millennial condition—the alienation and cruelty that come with being a functioning person under advanced global capitalism”. BLISS MONTAGE has the same grip on the surreal millennial experience: as the metanarratives Ma’s characters have been told about the world and their place in it fail, they plunge into an adulthood that appears similar in theory but far different in practice to the one they prepared for. In “Returning,” a woman visits her husband’s home country for the first time to experience a local festival together. When he slips away from her in the airport, she is forced to encounter the strangeness of his hometown alone and learns that the festival they have come to attend involves people burying themselves alive overnight in hopes that they wake up healed—if they wake up at all. “Another self,” the narrator reflects, “was needed to move into the future.” (105)

A metamorphosis, Ma seems to suggest, may be the only way to move forward on one’s own terms. In “Office Hours,” a young film professor takes her old mentor’s office only to discover a hole in the wall leading to a world frozen in time. As she navigates the politics of an academic career for which she fought tooth and nail, she teaches her class on The Disappearing Woman, noting that unlike in the films she shows, she cannot simply pick up and move to a new world that meets her expectations. After watching Ghost World, her students agree: “Enid gets to disappear, but most of us can’t do that. Most of us are like Rebecca: we’re critical of the world but we still have to live in it.” (155) Reflecting at the end of his career, her mentor says the same: “The sanest way forward—you have to split yourself up, like an earthworm,” he tells her. (142)

Ma’s women are both anxious and joyful, selfish and caring, unfeeling and full of wonder. They are the before and after of the Happy Interlude we never see onscreen. BLISS MONTAGE asks: How do we break free of the narratives placed on us? We split. We refuse to stagnate. We bury ourselves and regrow into something new.

BLISS MONTAGE can be purchased from Macmillan for $26.00.

Sahalie Angell Martin is an Oregon native currently residing in Columbus, OH. She received her BFA in Creative Writing from Emerson College and is a current MFA in Fiction candidate at The Ohio State University. She has work in Hobart After Dark, No Contact, The Offing, and Writer's Digest, and you can find more of her writing at sahalieangellmartin.com. 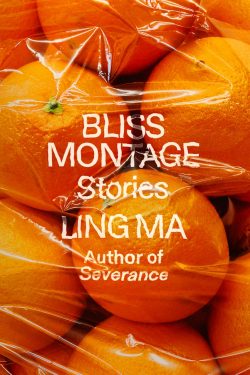