For James Baldwin’s many devotees, Jimmy’s Blues and Other Poems is representative of the American novelist and essayist we all know: the narrative voice in Go Tell It on the Mountain (1953) and the unabashed writer-activist of The Fire Next Time (1963). As we look back to what we know of Baldwin’s work and style, Jimmy’s Blues (2013) shows us the parts of his writing that have been overlooked: a poetic speaker, for instance, who brings blues and jazz into the sounds and stories of this collection. When Beacon Press published the first edition of Jimmy’s Blues in 1983, four years before Baldwin’s death, the majority of Baldwin’s readership did not perceive him as a poet. He was instead considered a strong, clear narrative voice and a witness to how Americans hated and loved one another. This collection is emblematic of the narrative flow Baldwin brings from his fiction and non-fiction into poetry; it is also evidence that as a novelist and poet Baldwin’s voice is always consistent.

As a black artist and cultural icon of his day, Baldwin’s work and persona existed in the service of the American public. He was, after all, a public American figure, acquainted with Martin Luther King Jr., Malcolm X, Simone Signoret and Lena Horne, and a good friend of Marlon Brando’s. Jimmy’s Blues and Other Poems is as much about Baldwin, the writer himself, as it is about the condition of non-whites in America, i.e., the feeling of being marked by the color of your skin amidst a predominantly white nation. Baldwin’s personality is enchanting, inescapable, and influenced by the relationships he has made throughout his long career as a writer. In many ways, I read these poems as confessional sketches or beats, depicting moments and moods in Baldwin’s life. His poem, “Inventory/On Being 52,” shows snippets of the speaker’s experiences, flashes of the places and people that have come in and out of his life. It starts, “My progress report / concerning my journey to the palace of wisdom / is discouraging / I lack certain indispensible aptitudes.” The journey to the “palace of wisdom” is ongoing for the speaker; it is still an idealized destination, and he lacks the appropriate “aptitudes” for such a journey. The speaker believes “he has packed the wrong things” for the “palace of wisdom” and yet the poem seems to believe that “there is always something one overlooks” when going on such a journey. The “journey” is a metaphor for the alleged wisdom that comes with middle age, as one gets closer to death. As the speaker takes stock of his journey to the “palace of wisdom,” he begins to see that arriving at “the palace of wisdom” is impossible. “Inventory/On Being 52” stands out in this collection as a poem that uses Baldwin’s infectious narrative voice to speak about a journey to maturity: it is a poem about how one transforms with age and time, about recalling ones past selves, and the parts one leaves behind, “overlooks.”

Nikky Finney’s introduction gives a unique context for Baldwin’s poetry as she explains, “Baldwin wrote poetry because he felt close to this particular form and this particular way of saying. Poetry helped thread his ideas from essays, to novels, to the love letter, to the book reviews, stitching images and feeling into music, back to his imagination.” As a storyteller and intellectual, Baldwin sought in poetry a unique space for stitching together music and his poetic imagination. He shows a deep knowledge for how poetry and song make history come alive in rhythm and sound. “Some days (for Paula)” is an anaphoric poem with a simple and lyrical rhyme scheme. The poem tells the story of Paula: “Some days worry / some days glad / some days / more than make you / mad.” Another poem, “Conundrum (on my birthday) (for Rico)” starts, “Between holding on, / and letting go, / I wonder / the difference. / It must be something like / the difference / between heaven and hell / but how, in advance can you tell?” The poem’s bluesy tone is strung together by these impossible-to-answer questions, which are often followed by stanzas that riff on the question itself; like an improvised guitar lick, the following stanza replies with as much complexity and depth as the question suggests: “But, saying that, / one’s forced to see one’s definitions / as unreal. / We do not know enough about the mind, / or how the conundrum of the imagination / dictates, discovers, / or can dismember what we feel, / or what we find.” The speaker says we simply do not know enough about the mind or imagination to know the difference “[b]etween holding on, / and letting go.” At the end, “Perhaps / one must learn to trust / one’s terror: / the holding on / the letting go / is error: / the lightning has no choice.” Beauty and life for Baldwin stem from the precariousness of terror, the sublime moments of the blues, rhythm and stops of improvisation, and the simultaneity of “the holding on” and “letting on.”

Baldwin once said that he learned to trust the terror and ugliness of the world at a young age from his friend and mentor, Beauford Delaney, the well-regarded black neo-impressionist painter. Baldwin’s life-long friend and biographer, David Lemming, writes in James Baldwin: A Biography (1993), “Beauford taught his protégé to react to life as an artist. Light and music, for Baldwin, became synonymous with Beauford.” We see Baldwin using his mentor’s advice, reacting to life like a poet/artist in poems such as “The Darkest Hour,” in which the speaker witnesses and reveals the greater significance of individual moments: “just before the dawn, what this hour tells us about who we are.” He says, “The darkest hour / is just before the dawn, / and that, I see, / which does not guarantee power to draw the next breath.” Lemming goes on to say, “the vocabulary of color and sounds learned in Beauford’s presence was to become the basis of Baldwin’s art. Delaney was to reconcile for his protégé the music of Harlem streets with the music of the Harlem churches, and this helped Baldwin to reconcile his sexual awakening.” Baldwin’s sexuality is always present in his writing because his sexuality was bounded by his ability to love. Baldwin once said in an interview, “The trick is to say ‘yes’ to life… I will never be able to deny a certain power that I have had to deal with, which has dealt with me, which is called love—and love comes in very strange packages. I’ve loved a few men, I’ve loved a few women. And a few people have loved me. That’s all that has saved my life.” Delaney’s lessons are impressed on the poems Baldwin dedicates to singers and musicians of his day, including “Le sporting-club de Monte Carlo (for Lena Horne)” and “A lady like a landscapes (for Simone Signoret).” A number of other poems are about or associated with music as well: “Song (for skip),” “Christmas carol,” “Song For The Shepherd Boy,” and “BALLAD (for Yoran).”

Although a number of the poems in Jimmy’s Blues explore blues and jazz in poetry, the sharp political voice that is unmistakably Baldwin’s resonates throughout this collection. The first poem in the collection, for instance, “Staggerlee wonders,” shows Baldwin’s use of form and narrative voice through a monologue about how black political awareness is perceived in the Unites States. “Staggerlee wonders” shows Baldwin’s interest in the way form and sound are integral to storytelling in poetry. As the longest poem in Jimmy’s Blues, “Staggerlee wonders” is divided in five lengthy sections. The first half of part one begins,

I always wonder
what they think the niggers are doing
while they, the pink and alabaster pragmatists,
are containing
Russia
and defining and re-defining and re-aligning
China
nobly restraining themselves, meanwhile,
from blowing up that earth
which they have already
blasphemed into dung:

The multiple enjambments in section one highlight the empty spaces between line breaks, some for emphasis (/ Russia /… / China /) and others to dramatize his reportage of the lies recycled by the American government. He uses the word “nigger” self-consciously in order to not decorate the reality of blacks’ condition and the way they were perceived in Baldwin’s time, and one could argue, in our time as well. Finney, speaking about this same moment in “Staggerlee wonders” says that for Baldwin “nigger” defined the “long suffering character, imagined, invented, and marched to the conveyor belt of the Republic, in order that they [those who identify as white] might hold on for as long as possible to ‘the very last white country the world will ever see’ (Baldwin, ‘Notes on the House of Bondage’).” In this poem, then, as is the case for the other poems in Jimmy’s Blues, Baldwin’s speaker is always attentive to the present moment, and that moment’s beauty, terror, and ugliness, which teach one “to trust / one’s terror” and to keep “holding on / [for] the letting go / is error.”

In 1987, James Baldwin died of esophageal cancer in Paul-de-Vence, France. His funeral ceremony was held at the Cathedral of St. John the Divine in Harlem, New York where Maya Angelou spoke about their life-long friendship, the way Baldwin was a true and loving brother. Amiri Baraka called Baldwin “God’s black revolutionary mouth” as the cameras moved from Baraka to the hundreds of sobbing attendees inside the large church. Although Baldwin died an atheist, the pulpit played a big role in his writing and was a marker for what he understood as one of the powers dividing blacks and whites in his day. James Baldwin was a celebrity writer at the time of his death, internationally known for novels such as Go Tell It on the Mountain, Another Country, and book-length essays including Going to Meet the Man, The Devil Finds Work, and The Fire Next Time. We are now privileged to have, in this new edition, his collected poems and the new sounds of his prophetic voice. This collection could not have come any sooner. Amidst our country’s recent race conflicts and injustices, we need Baldwin’s prophetic voice to remind us that love and understanding can do much to transform race relations in the United States.

Ayendy Bonifacio is from Brooklyn, East New York. He is a PhD student in the English department at The Ohio State University, studying nineteenth-century American literature with a focus in historical poetics and poetry. He teaches English composition, and during his time off, writes poetry and does photography. 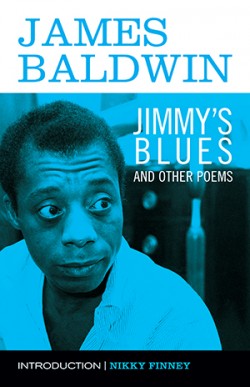