When both her parents went blind suddenly, and in quick succession, artist Virginia Mallon began to think a lot about vision. Faced with the possibility that a loss of sight could be genetic, Mallon—who calls herself a “worst-case-scenario planner”—turned to photography as a means of preparation. Using grease, grime, water, and fabric to distort what is captured by her camera’s viewfinder, Mallon attempts to mimic the softened, shape-shifting view described by her family—a view she fears she is fated to inherit. 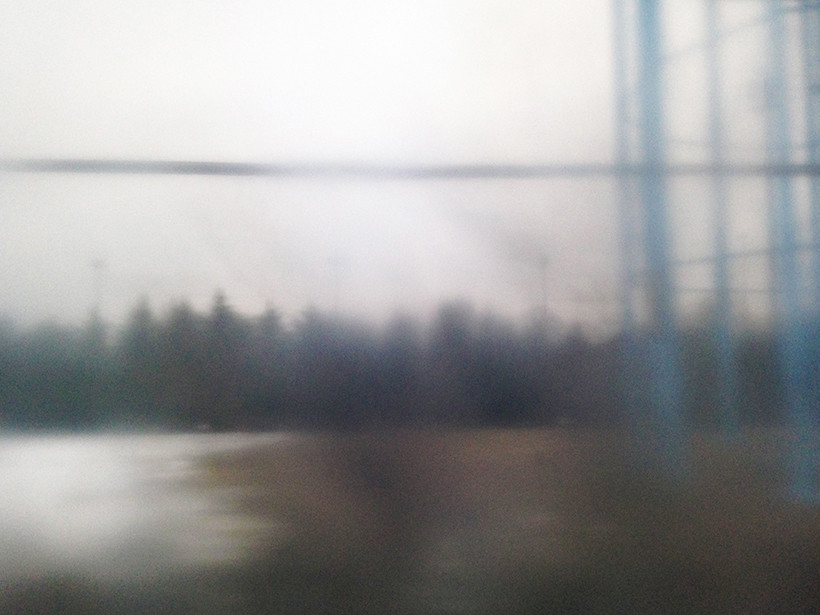 Waiting for the Dark To Settle follows Mallon’s four-hour-a-day commute between her home on the north shore of Long Island and her day job in Manhattan, passing through rural and urban landscapes transformed by layers of homespun filters. What Mallon finds is a new way of looking at her surroundings, and unexpected beauty in a vision she thought would be diminished.

Suzannah Showler: Writing to me about Waiting for the Dark to Settle, you described your childhood offering a kind of training ground for looking at the world and seeing it clearly. Could you talk a little bit more about that?

Virginia Mallon: I grew up on the Brooklyn-Queens borderline. I was born in 1960, which you would think would be about peace and love and all that, but it really wasn’t. It was the middle of the race wars, and it was really a time of turmoil, at least in my neck of the woods. There were people from all different kinds of racial and cultural backgrounds living in these two lower-to-lower-middle-class neighborhoods butting up against each other. It was a real clash of culture, and you had to be on your toes. We were lucky we survived.

Plenty from my peer group didn’t: drugs, bad lifestyles, drunk driving. That kind of thing happened a lot. You really did have to watch what was going on—you couldn’t just go along and not pay attention.

But my parents were oblivious to everything. They just saw what they wanted to see. They were really good at turning a blind eye to things they didn’t want to look at. So then when both my parents went blind, I thought, “Oh my god, is this poetic justice?” It was also really frightening because it comes right back to me at the gene pool level. If they went blind, I could very easy go blind too.

SS: Your parents went blind very suddenly. Can you tell me what happened?

VM: They were living in that neighborhood on the Brooklyn-Queens border with all these tiny houses: very modular, very cookie cutter, compressed. Everything looks the same. And then they retired and moved to the country, and it seemed like literally the moment they moved up there, my father went blind. He pretty much went blind overnight.

My father’s passed away, now, but my mother’s still alive. She’s 87-years-old. For her, it was different. She’d say, ‘Maybe it’s because I’m in the country and everything is darker, but the streetlights have these big halos of light around them.’ Then she was at the beach one day and the horizon looked like a heartbeat, and she knew something was really wrong. She went to the doctor and found out she had macular degeneration. There are two kinds of macular degeneration, and one is worse than the other. She had the bad kind in one eye and the “good” kind in the other. So she can still see partially out of one eye.

I just think if the horizon looks like a heartbeat, that’s got to be wild. She still sees all the beautiful colors, but everything is wavy. There are no straight lines for her; everything moves. It’s a fluid world she’s living in now. And that’s intriguing to me as much as it’s frightening. 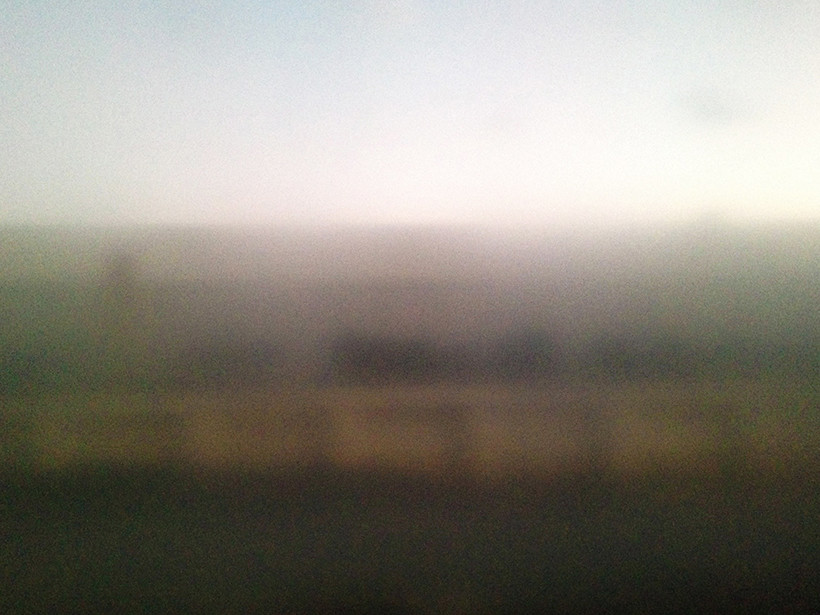 SS: Are the images in this series based on how your mother describes her world looking now? Or is it more an imagined idea of what blindness might be like? A bit of both?

VM: I’m a worst-case-scenario planner. It’s part of my makeup. So when my parents went blind, I became very vigilant. I stared thinking: Does that light look funny? Is that normal?

I started volunteering for the Hellen Keller Foundation, working with the recently blind elderly. I figured this was what my parents were going through, and they didn’t need help, but maybe helping people in the same position as them would be some kind of good karma. I also thought I had better figure out what it’s like to go blind.

So, this project is less trying to replicate my parents’ loss of vision and more trying to imagine what my own loss of vision could look like. I have a very long commute to my job in the city. Would I be able to do this journey every day? What would my world look like? What if it was manifest as some other world?

The rural area where I live is by the coast, and it is a gorgeous Long Island shoreline. The funny thing is, it’s lovely, but it doesn’t look so good “blind.” It’s a beautiful setting, but it doesn’t look so impressive through a compromised lens. But the urban part of my commute looks gorgeous. The train I take goes through all this urban blight—Long Island City, Jamaica, Queens, all these places that are really urban and raw. They look amazing blind. I was really intrigued by how beautiful these places look when you’re seeing them through a blind eye.

SS: In your artist statement, you talk about exploring what can be gained from loss. Is getting to that that beauty the kind of gain you’re referring to? A new way of seeing something?

VM: It is. It’s an expansion of vision. I come to everything I do from a painterly standpoint. The epitome of painting is this kind of photorealism where you want everything to be so crisp, exploring the depth of field and all that. With this, it’s a very different way of seeing, but I’ve realized it’s just as legitimate. There’s this shock, like: “Wow, maybe my own hyper-focus is making me blind to what else is out there.” 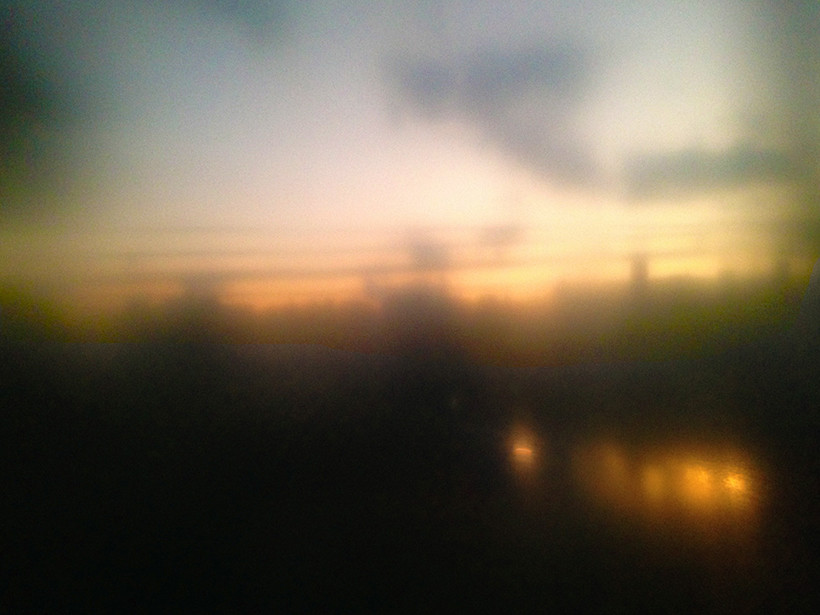 SS: Commuting has become important to the project, it seems. Can you tell me a bit about your commute? You mentioned in your email that it’s four hours a day? That sounds grueling.

VM: It is grueling. It’s two hours there, and two hours back. I leave around quarter to seven and I get in at nine. Train travel can really work your nerves on a daily basis. But it can also be wonderful. Because you are always seeing something different, always moving through time and space, through landscapes that change in different times of year. There’s a lot to see. I’m always surprised by what people don’t look at.

SS: How exactly do you get these shots? What kinds of things do you use as a filter to obscure the image?

SS: Do you put the Vaseline directly on the camera? Or are you smearing these things on the train window?

VM: I put it on my cell phone. Just at little bit. Cell phone cameras are sensitive, so if you put too much it gives you nothing.

SS: Has your mother seen these pictures? Can she see well enough to see them?

VM: She can see through her good eye, but these pictures don’t appeal to her at all. It annoys her that they are out of focus. She likes crisp images. Straightforward. She’s really intrigued with lighthouses right now. That’s her obsession—photos of lighthouses.

SS: That seems sort of poetically appropriate, right? A lighthouse is this beacon in the dark.

VM: That’s kind of funny. You’re right, it is. With my pictures, my mother would say ‘Why are they so fuzzy? Why are they so dark?’ She doesn’t like things that are subtle, or hard.  She’d rather look at a lighthouse. I guess that’s what happens when you go blind. 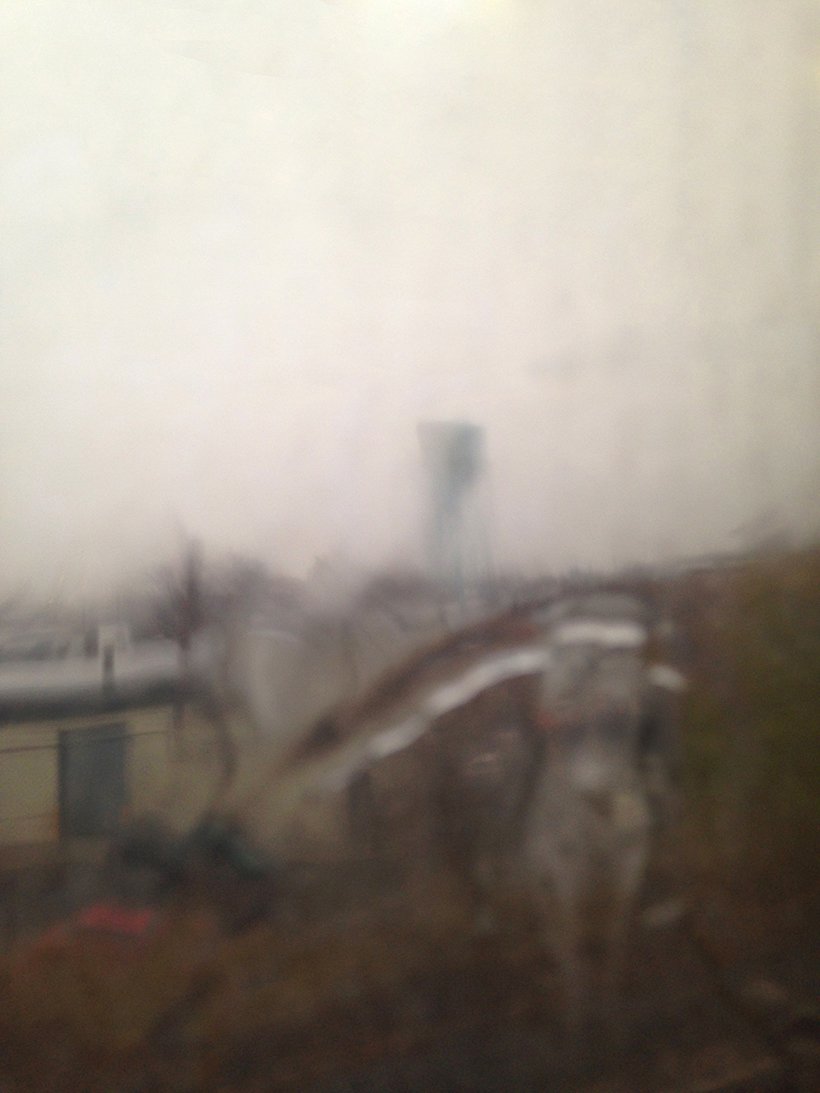