Near the end of Annie McGreevy’s debut novella, Ciao, Suerte, a young woman named Inés reflects on the ways her life has changed since meeting her boyfriend, Miguel. They are two twenty-somethings living in Madrid—she a local, he a wealthy émigré from Patagonia—and with their union Inés finds that “the fear of nothing, the fear of falling and falling and never hitting the ground…[has] lessened.” However, any gratefulness Inés feels is tempered by disdain, as Miguel’s indifference forces her to admit her own vulnerability: “she is deeply, viscerally offended that he doesn’t feel it too,” this lessening of fear.

Ciao, Suerte concerns itself with our persistence in policing the feelings of those we love. Critics have noted the novella’s political preoccupations—it concerns the fallout of the real-life military usurpation of Argentina’s government in the late 1970s, the consequences of which reverberate to the narrative’s present-day of 2003—but the story is arguably only nominally about national politics: the sundry sins of Argentina catalyze, but do not necessarily overshadow, the various emotional exploitations perpetrated by the main characters.

These characters revolve around Miguel, and project their deepest longings and aspirations onto him. Adopted by a prominent Patagonian businessman and his wife, Miguel is the biological son of two members of the Montoneros, a group that opposed the Argentinian military’s rise to power. His birth parents, Alejandro and Sabine, were captured and murdered by the government—and Alejandro himself is the son of two wealthy Argentinians, Beatriz and Giancarlo. Their marriage dissolves in the opening pages of the novella as a result of Beatriz’s concomitant grief at the loss of her son and obsession over finding the grandchild her husband “campaign[s] to try to convince her…was never born.”

Here we get our first inkling of what this story is really about, as Giancarlo laments that “he had not understood how to save [Beatriz]” in the wake of the loss of their son. Giancarlo represents another element of love, the ways in which we are bound—by ideology, by affinity, by genetics—to other people, and the ways in which we fail to meet the expectations they place upon us.

Ciao, Suerte is largely about thwarting expectations—amongst the characters themselves, and for us as readers. The novella’s centerpiece is the reunion of Beatriz and Miguel; she has found him through Argentina’s Grandparents Index, a DNA database to which Miguel had unknowingly given a sample. In the hands of a writer less subtle than McGreevy, more concerned with the sensational or sentimental, Miguel would be flabbergasted at the appearance of his heretofore unheard-of grandmother, but excited to learn more about his biological parents—and Beatriz would be ecstatic at the opportunity to know the young man who shares so much in common with her beloved son.

Such a pat conclusion to Beatriz’s journey would be impossible: her own feelings for Alejandro, let alone his progeny, are deeply conflicted. In some ways, she blames her son for his own death; she rues the “overconfident smile…Alejandro wore on his face until the day he was killed, probably” and sees Miguel as “a posh, futuristic version of Alejandro” who is somehow “more relaxed.” This relaxation insults Beatriz, who discerns in her grandson an undeniable phoniness:

“He’s got the manners of rich kids. The manners she had when she was a rich kid. Polite, but with a mechanical sincerity. Does he use this shit on other people? Does he think he’s a European? Does it work? It must.”

For Beatriz, who has spent over twenty years surveying “[c]hilden on the street in Rosario with Alejandro’s white skin and floppy hair” in the hopes that one of them “might be [her] grandchild,” her disappointment with Miguel is not only unexpected, or heartbreaking—but also a comment on the unrealistic expectations she has placed on this encounter, and this young man, in the first place. Over a strained lunch in Madrid, Beatriz must contain her impulse “to reach out and bring [Miguel] to her, hug him until he sees what she sees, knows what she knows;” in the face of such unguarded, and fundamentally selfish, love, can we really blame Miguel for his aloof detachment?

Beatriz’s desire to shape Miguel to her own specifications is reflected in Inés, who understands upon watching Miguel flirt with an old romantic fling that “she’s falling in love with him…because she has never before had this intense desire to erase a man’s past.” Throughout the novella, parallels between Inés and Beatriz abound. A native of Madrid, Inés must contend with “run[ning] into some member of her extended family on the street or the metro” and “look[ing] across the dinner table at her brother and…see[ing] her own face.” Compare this with Beatriz’s compulsive need to scour the faces of Argentinian children in the hopes of seeing Alejandro’s reflected back at her, a “relentlessness” for which Beatriz chides herself near the novella’s end: Inés’s close family ties are a source both of comfort and that “extreme fear” she expects Miguel’s presence in her life to ameliorate.

And what of Miguel? As Giancarlo reflects on his fatherly feelings for Alejandro, he expresses frustration at being “hopelessly in unrequited love with a careless person.” It is this carelessness that binds Miguel to his biological father, but while Alejandro channeled his energies into political activism, Miguel spends a year futzing around Europe before starting law school. Alejandro dies for a cause that Miguel dismisses to Beatriz, claiming the Montoneros “talked too much.” Miguel proves himself shallow, unambitious, and relatively unremarkable: the antithesis of what a reader might expect of the man upon whom Beatriz and Inés have hitched so many hopes and dreams.

McGreevy rounds out Ciao, Suerte’s collection of characters with someone else who has devoted himself to a callous entity: Eduardo, a senile former military officer currently languishing in an Argentinian retirement community. Eduardo—the man directly responsible for the dirty adoption that stripped Miguel from his family—emerges as one of the novella’s most sympathetic characters. At turns hilariously contemptible and oddly humane, Eduardo is a stand-in for military corruption and the feebleness of aging, outmoded politics: he spends his days reflecting on women like Sabine, imprisoned by the military complex for treason, women who “had done something awful against the state, though now Eduardo can’t remember what it was.”

If the sections told from Eduardo’s point of view lend the story its highest moments of satire, they also present a twisted commentary on the events unfolding between Beatriz, Miguel, and Inés in Madrid. In imagining the successful lives of the children whose adoptions he facilitated, Eduardo reflects that “[p]eople were so amazing, and there were a million different ways to love them, even the ones you didn’t know.” This belief is shared with Beatriz, who spends decades loving an imagined grandchild only to find herself disappointed in the real-life Miguel.  Eduardo also deems the female rebels “nice girls who just got caught up with the wrong men”—a designation that might as easily apply to Inés in her single-minded pursuit of Miguel.

Although Eduardo’s comment is sexist, stripping these women of their ideological agency in perceiving them as victims of deceptive and politically-motivated men, in many ways Inés is indeed subject to Miguel’s whims. She longs to be invited back to Patagonia with him when he leaves Europe, hoping for “[a] thing that will tie him to her irrevocably.” While Inés serves doubly as a mirror of Beatriz’s insecurities and a foil for her familial isolation, at times the character feels more like a plot device than a fully-realized human being.

Inés is one of roughly six characters whose thoughts thread through Ciao, Suerte, and the novella ends with her. However, it begins with Beatriz, the undeniable heart of the story, who

“gets into bed and doesn’t get out for over a week except to use the bathroom. The only other time she was still for so long was when she’d had her wisdom teeth removed as a teenager and her father said, Think of it like four separate gunshot wounds inside your mouth. That’s what you’re recovering from….This is the same, Beatriz thinks now, thirty-five years later—it’s like bleeding inside my own head. But this will never end.”

Ciao, Suerte is primarily a narrative of grief, most potently the grief of a mother who has lost a child. Such losses are the basis of any number of literary works—that a child’s death forever alters the fabric of his or her parents’ lives is by now accepted truth—and so it is particularly noteworthy when a writer finds a fresh way to describe the mental and physical particularities of a familiar tragedy. McGreevy does her best work, and wields her novella’s true emotional power, when she uncovers these new ways of telling us truths about love and loss that we already know, but have failed so far to explain.

Jess Rafalko lives in Columbus, OH, where she is a first-year MFA candidate in fiction at The Ohio State University and serves as Associate Reviews Editor of The Journal. Her work has appeared in The Apple Valley Review, and was awarded its 2013 Editor's Prize. A native of a small town in Pennsylvania, she still has trouble reading the bus schedule and is amazed that grocery stores in Columbus sell hard liquor. 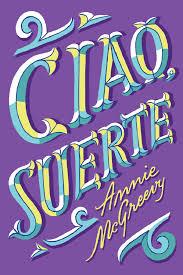