In “ICELANDx207,” a three-part series, artist and photographer Justin Levesque documents Iceland’s entry into the Maine waterfront and economy. Utilizing photography and podcasts, “ICELANDx207” depicts life aboard a trading ship, captures portraits of Icelanders in Maine, and examines the revitalized and bustling International Marine Terminal (Portland, ME). The first of the series, “Green Line,” chronicles Levesque’s nine-day self-created artist residency from Portland, ME to Reykjavík aboard the Eimskip container ship, Selfoss. 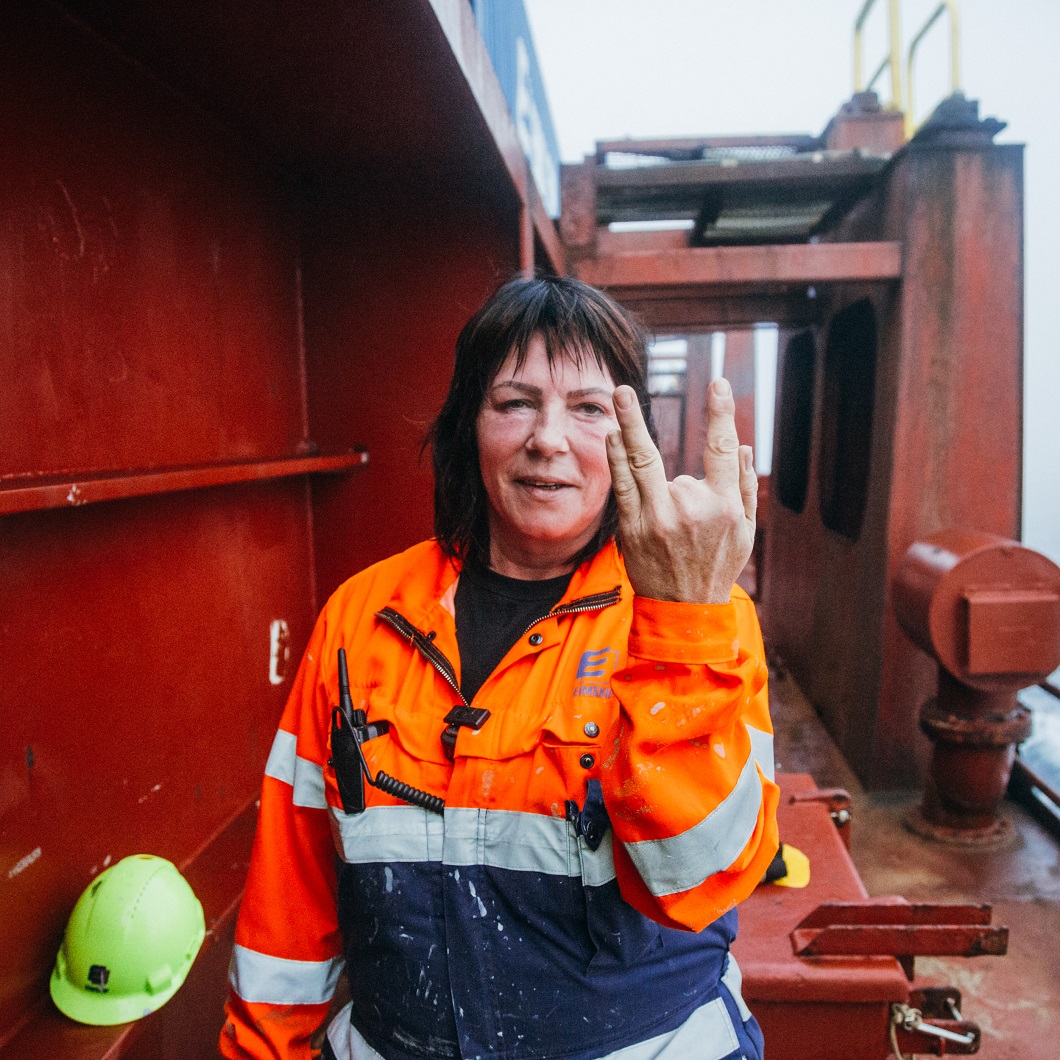 Margaret Cipriano: Looking at your images, I have a sense of an implied narrative, or at least, a gesture toward narrative. How do these pieces combine your personal story with that of your subjects?

Justin Levesque: “ICELANDx207” as whole personally speaks to a long-running fascination and love for Iceland. It’s been shockingly serendipitous that a borderline obsession was answered so accurately with the arrival of Eimskip in Portland and further, to then making the right phone call at the right time to the right person which ultimately put me smack dab in the middle of a conversation important to Maine. The peculiar luck of it all is not lost on me. I’ve never had a calling before but I imagine this is what it feels like. 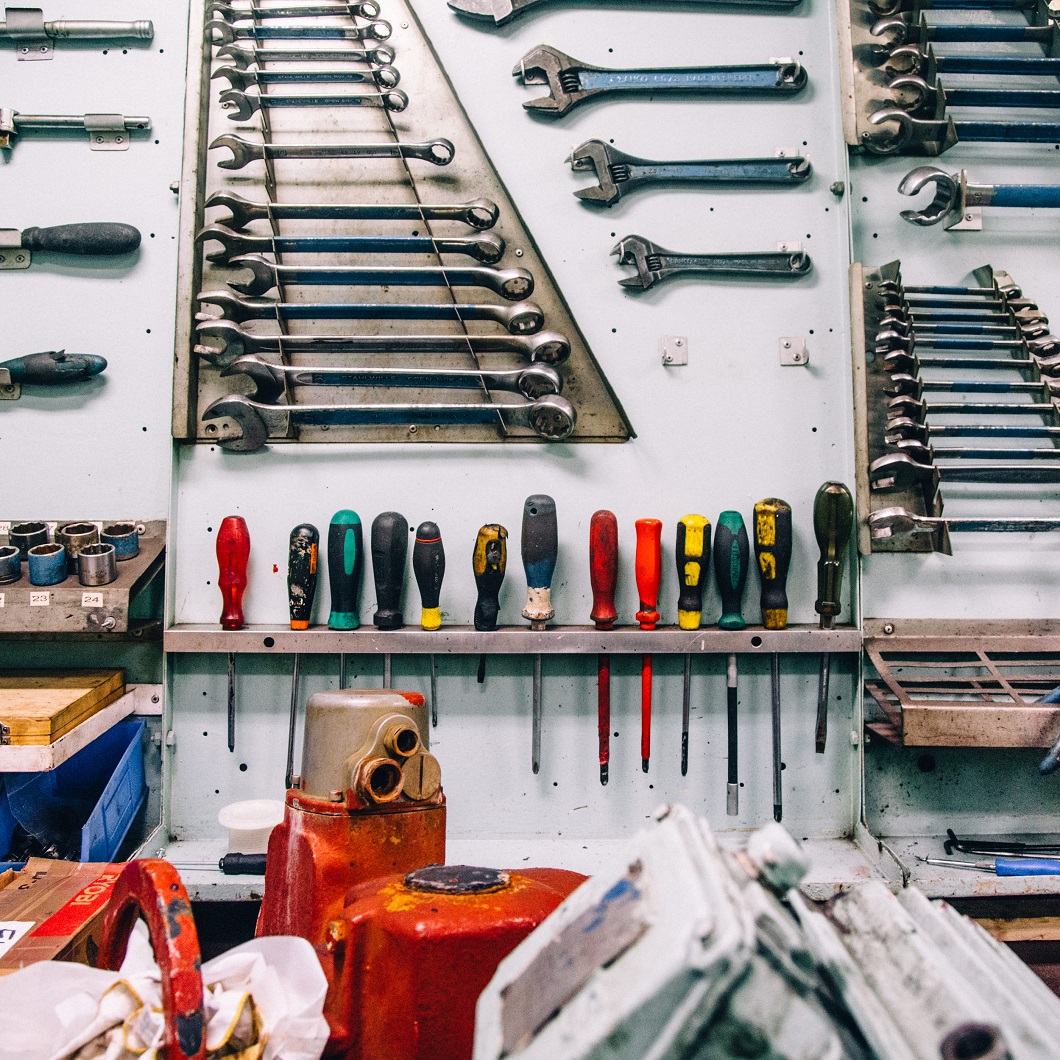 In addition to making images, I interviewed the officers and crew about life / work at sea and released a nine-episode podcast for each day on board. Between a slight language barrier and being a stranger in a strange land (rather, ship), I initially thought to minimize how much I let myself become part of that narrative. But ships, though massive in size, can be psychologically small. That is to say you get to know your fellow shipmates quickly and a temporary family of sorts forms for the duration of your rotation. 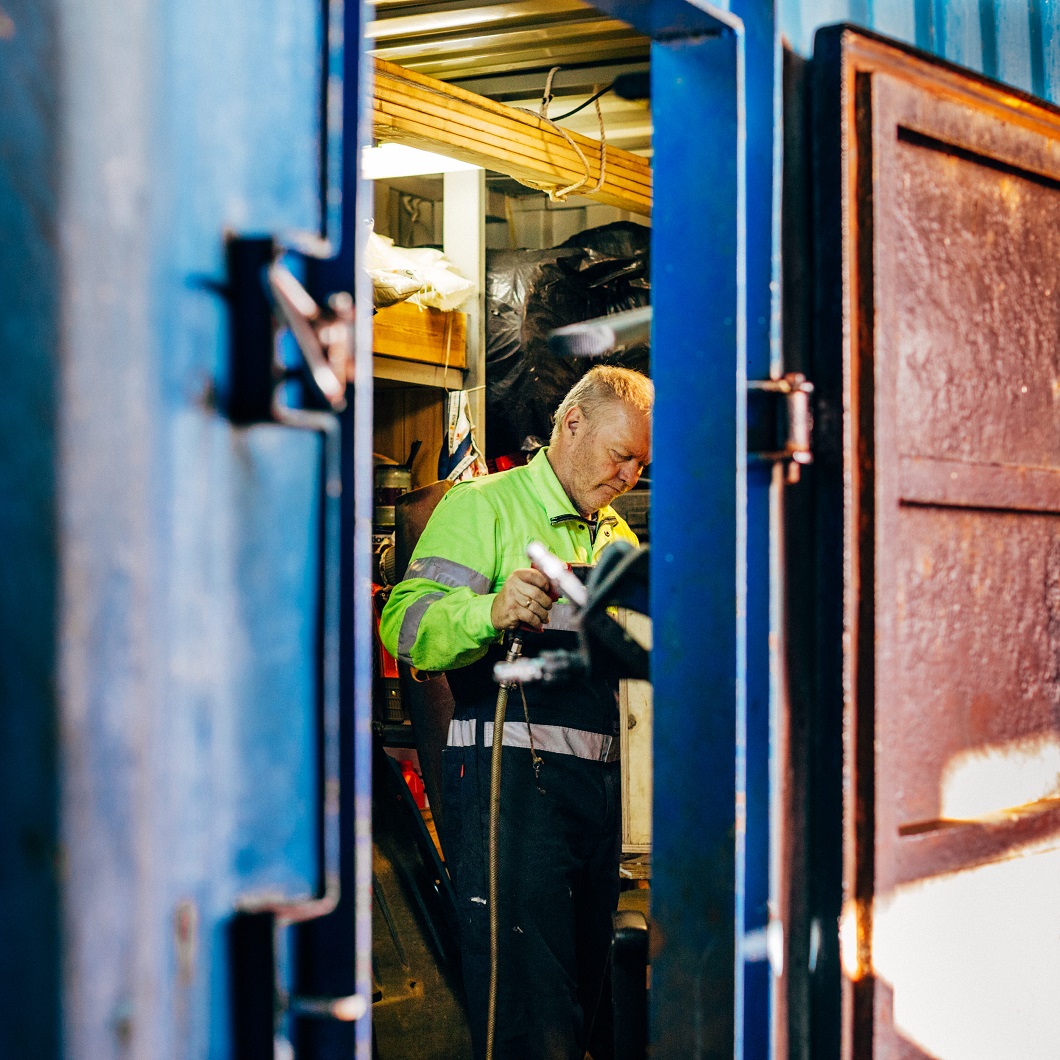 Beyond that, the images made while on Selfoss can be always located within the inherent narrative of choosing to go aboard the container ship for those nine-days in the first place. Subsequently, there was a heightened awareness of a beginning, middle and end to the experience. Wind and weather permitting, we would arrive in Reykjavík and it would eventually be over. It was important to maximize each day on board and making images became the mechanism for how I explored the ship from top to bottom. Everything was new and unfamiliar.

MC: In a previous interview, you mention how being at sea is akin to being in a “liminal space.” How does your sense of “non-place” relate to photographic process? In other words, has being at sea changed or altered your process or how you view the final images?

JL: Before I left on the voyage, I sought the insight of my friend and printmaker Gwendolyn Tatro who also has extensive experience as a chef on many ships. And she said, “Just wait, one day at sea feels like three days on land.” I didn’t really understand what that meant until I had that exact sense of discordant time for myself on Selfoss.

As a liminal space, shipping routes exist between multiple segments of two fixed points on a map. In my case, these points were sailing from Portland, Maine and Reykjavík, Iceland. Of course, airplanes do this same job for us and it’s faster, so most people generally choose to fly across large distances. But what this does is directly contribute to the conceptual size of the space between two points. This is what geologist David Harvey calls time-space compression. To put it simply, the faster it takes to cross a distance, the more that space disappears… or specifically with the sea, is forgotten. 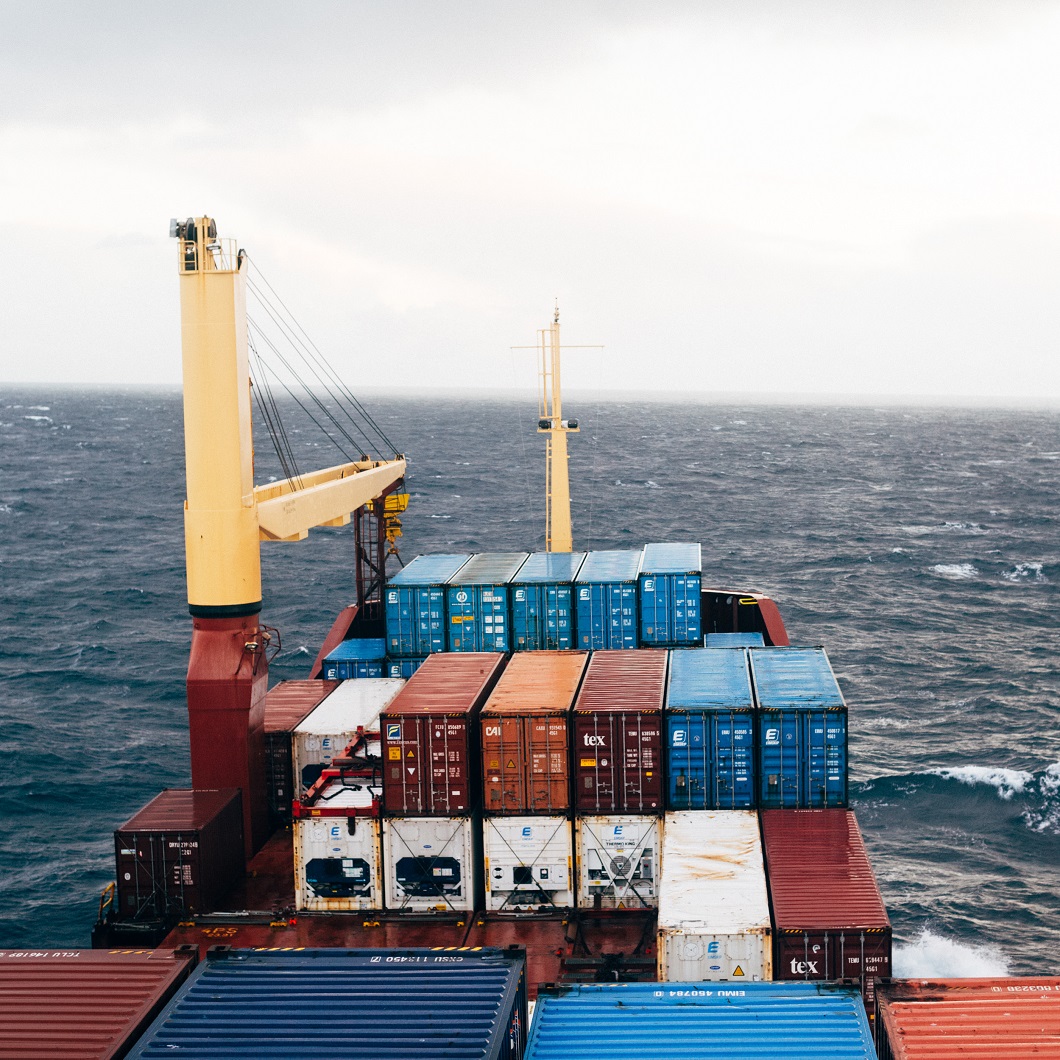 Walking on to the container ship was like participating in a reverse of that scenario or as I’m calling it, a time-space expansion. This forgotten space, or non-space, began to unfold itself before me as we slowly made our way through the North Atlantic. But it wasn’t entirely the same as it was before. Can you ever truly remove a crease from a folded piece of paper? Or kind of like if you’ve ever tried to unstick a Band-Aid from itself, the adhesive attempts to maintain the connection and in the process is stretched across its surface. Forgotten spaces aren’t quite the same every again, it’s a new landscape.

So with that in mind, we also have anthropologist Victor Turner, who rather than thinking of the liminal as a specific place instead describes the liminal as an experience in three stages: separation, passage and reassimilation. This, of course, speaks to how I physically experienced transportation by sea. But further, it provides an apt description for what influences the process in how I now make and view images. Photographs could be thought of as remnant liminal objects; a record of a subject suspended in a state of passage between what came before and what will come after. 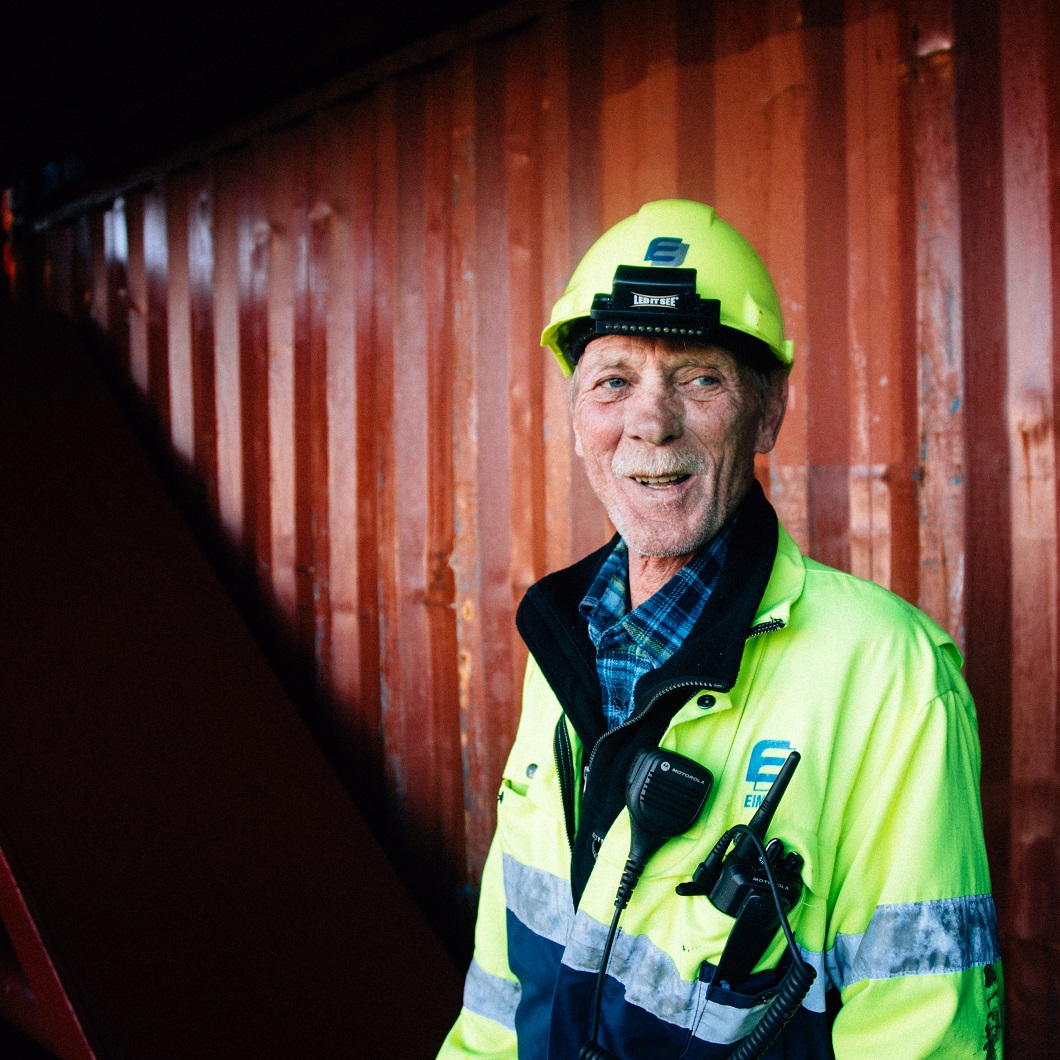 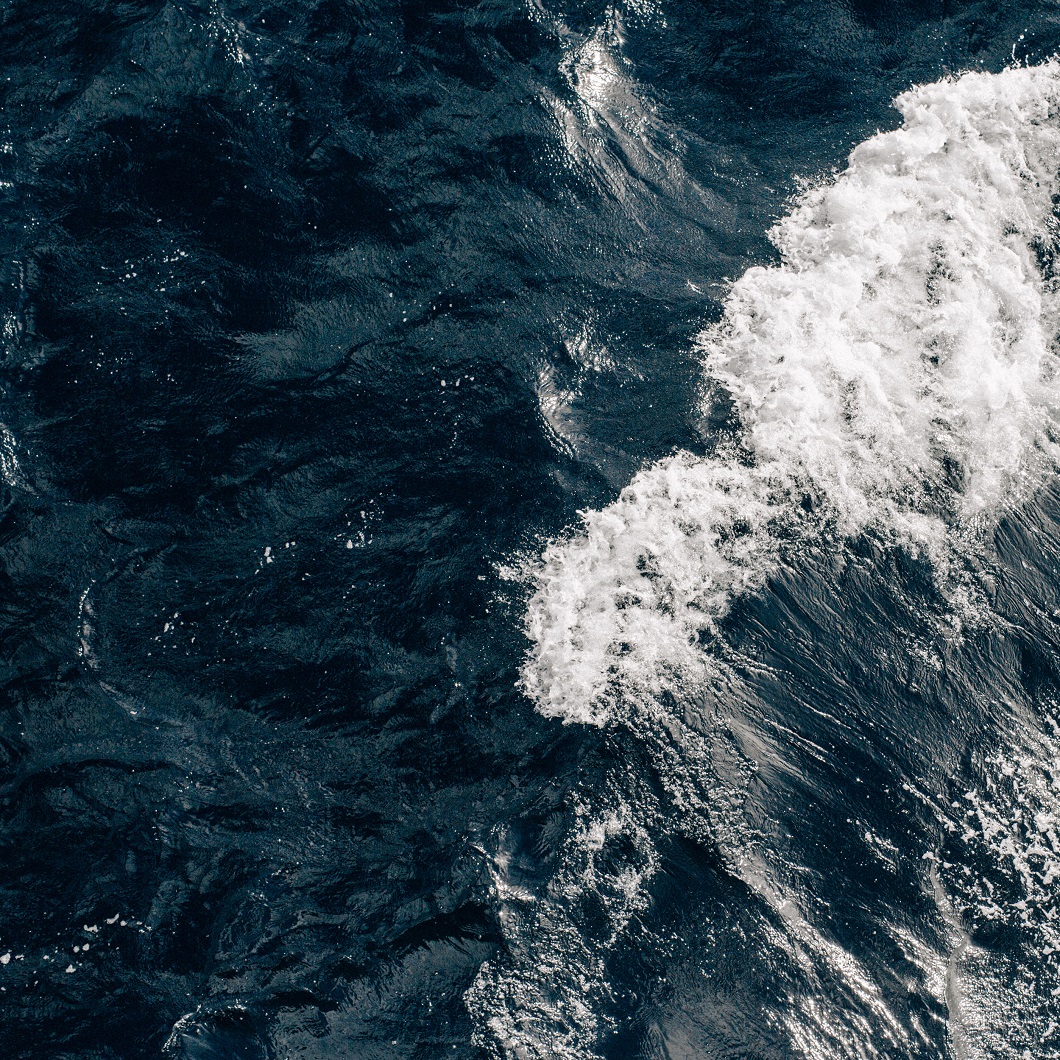 Though I photographed both digitally and with film during my nine days at sea, I noticed that when using my medium-format Mamiya, the amount of time needed increased in all aspects to make the image. The liminal distance was longer between two points. So, now I wonder… perhaps the space of the image itself, the liminal object, is now larger too?

MC: In a similar vein, in what ways does photography as a medium help you negotiate the intersection of commerce and art?

JL: From the very beginning of the project, one of the main criticisms or questions raised was would I be able to make images about Eimskip’s impact on the Maine waterfront without the work becoming a commercial for the business. I’ve made a conscious effort to not describe the project as a documentary but rather to position the work in the context of creative non-fiction. I don’t claim or promise to present anything other than the viewpoint I captured.

To some extant, I think folks are beginning to be more critical of photography as medium. Like questioning whether or not a magazine cover has been Photoshopped. Or the ways images are used to sell products or political campaigns. There’s been a shift in the accessibility of image-making (iPhone) and we use our Instagram feeds to project the best versions of ourselves to the world. Those tactics of subversive influence increase in subtlety with each new iteration. Honestly, I still get a little surprised that photography continues to help obtain access as much as does. It can be tricky. But even still, it persists as an important part of that negotiation. There’s somehow a steadfast belief that remains in the power of photographs to tell The Truth rather than A Truth. 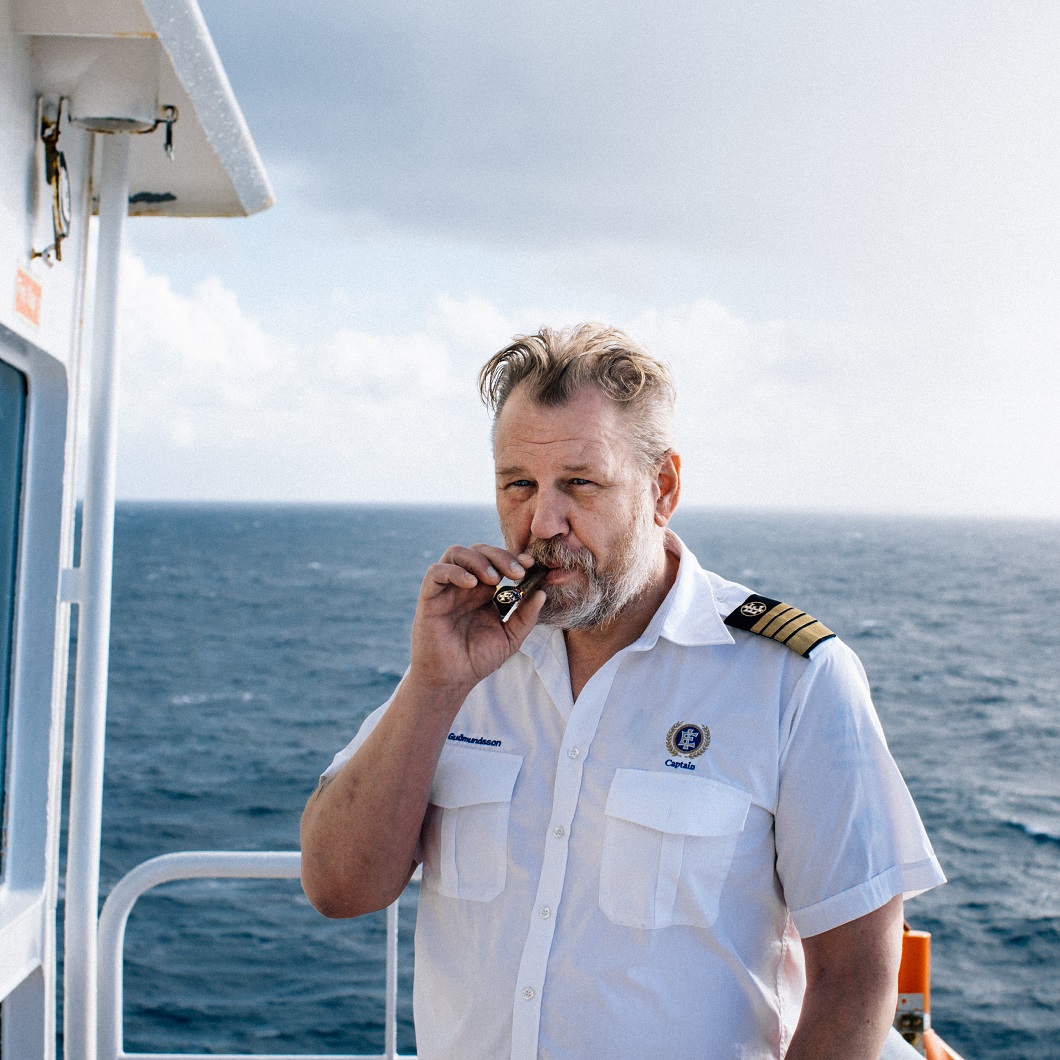 MC: In regards to past work or your overall aesthetic as an artist, how does this project fit in? Is it a departure from what you’ve been doing or an extension/manipulation of your overall interests?

JL: Material culture, community, portraiture and image-based works have in one way or another always been at the core of my practice. Earlier investigations into those ideas would also often address components of my own identity. For instance, I grew up in small city in southern Maine that held a deep and proud Franco-American heritage. After my Pépère passed, I spent weeks in his three-story barn taking notes and making images of the workshop filled with neatly organized tools. Everything in its right place. The objects he left behind were artifacts that harkened to both personal and cultural histories.

And I also spent three months driving across New England making formal portraits of people with genetic bleeding disorders for a project called “New England Bleeders.” Hemophilia and bleeding disorders are chronic conditions that, more or less, don’t allow your body to correctly clot from injuries. I have hemophilia. In hindsight, there were several motivating factors to create the work like locating myself within the connected but disparate communities of my identity. But further, I sought to make images that made visible a world not seen by most. 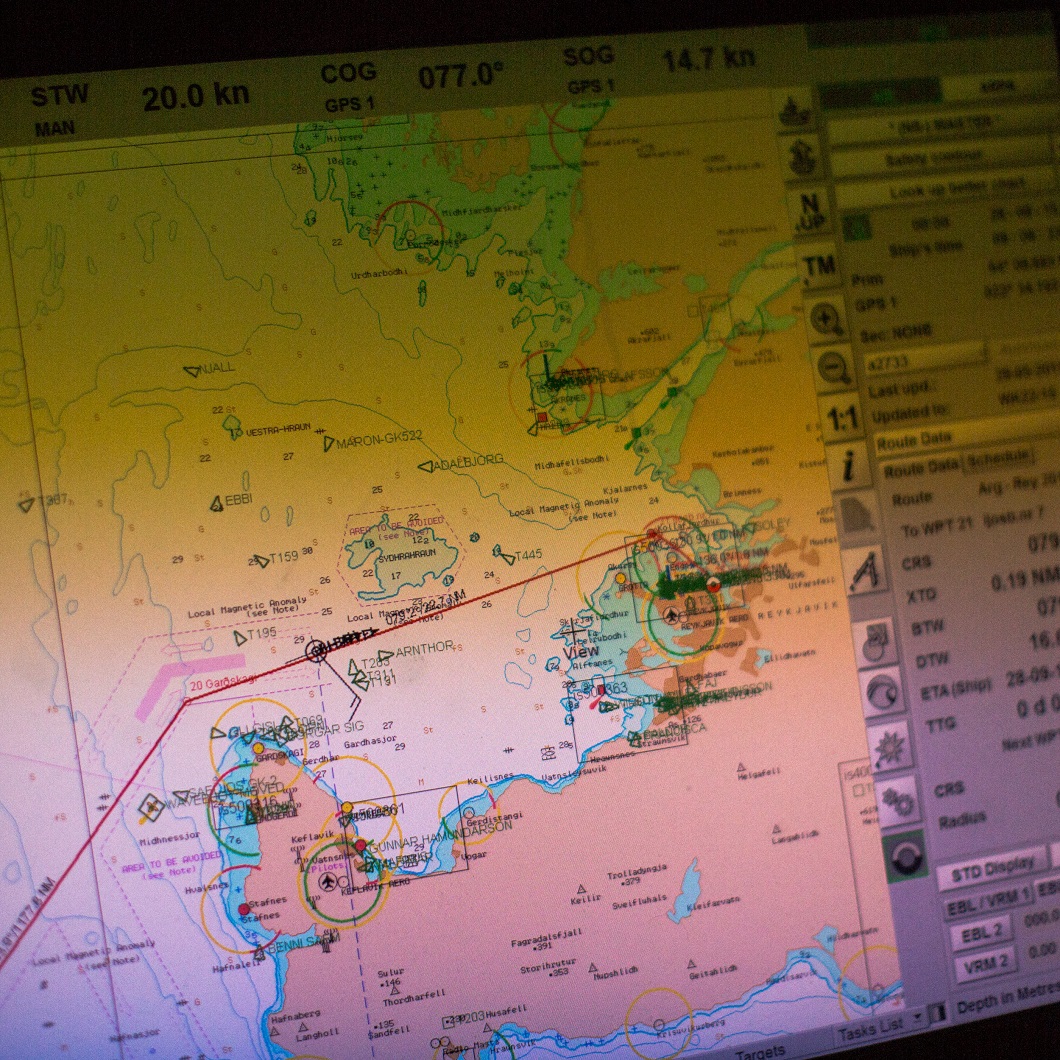 These core ideas form the foundation for my current work but I now approach the subject more obliquely. The purpose of “ICELANDx207” is to observe Maine’s emerging relationship to Iceland; two places with their own histories and prevalent mythologies. They are places, tourist sites, already rife with previously made and disseminated images. The Green Line presents the opportunity to makes images about both places without actually being there while simultaneously peering into the deeply complicated world of shipping.

MC: I’m also interested in how you refer to the Green Line, connection between Iceland and Portland, as an “invisible thread.” How does the combination of photography and podcasts negotiate or maybe remedy this notion of “invisibility?” How is invisibility relevant both culturally (to these places) and to your work?

JL: The Green Line is where we can precisely locate the physical space of exchange between Maine and Iceland. Further, the shipping route as invisible thread identifies several symptoms of the condition that Rose George, author of Ninety Percent of Everything, calls “sea blindness” in which the shipping industry now lives most predominantly in the back of people’s mind. 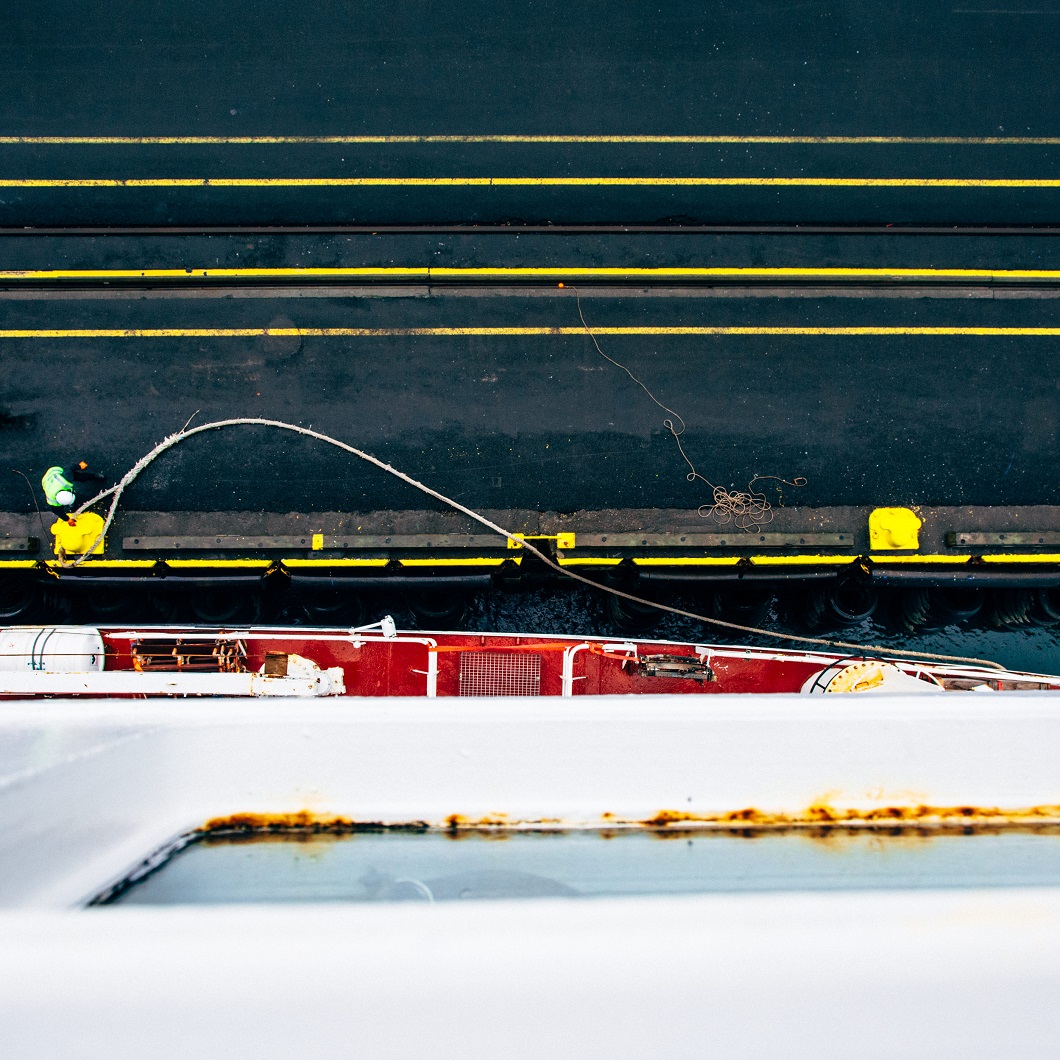 In Maine, this concept extends to the general public’s perception of the actual ongoing process of rediscovering the sea and its potential economic impact for the state. The photography and podcasts made during the voyage provide a glimpse into life on a container ship typically not experienced by most folks. One of the goals for “ICELANDx207” is to provide an opportunity for informed citizenship. You can now see inside the ship and learn how different parts work. You can hear, in their own voice, the experience of seafarers who spend their lives dedicated to the work found at sea. 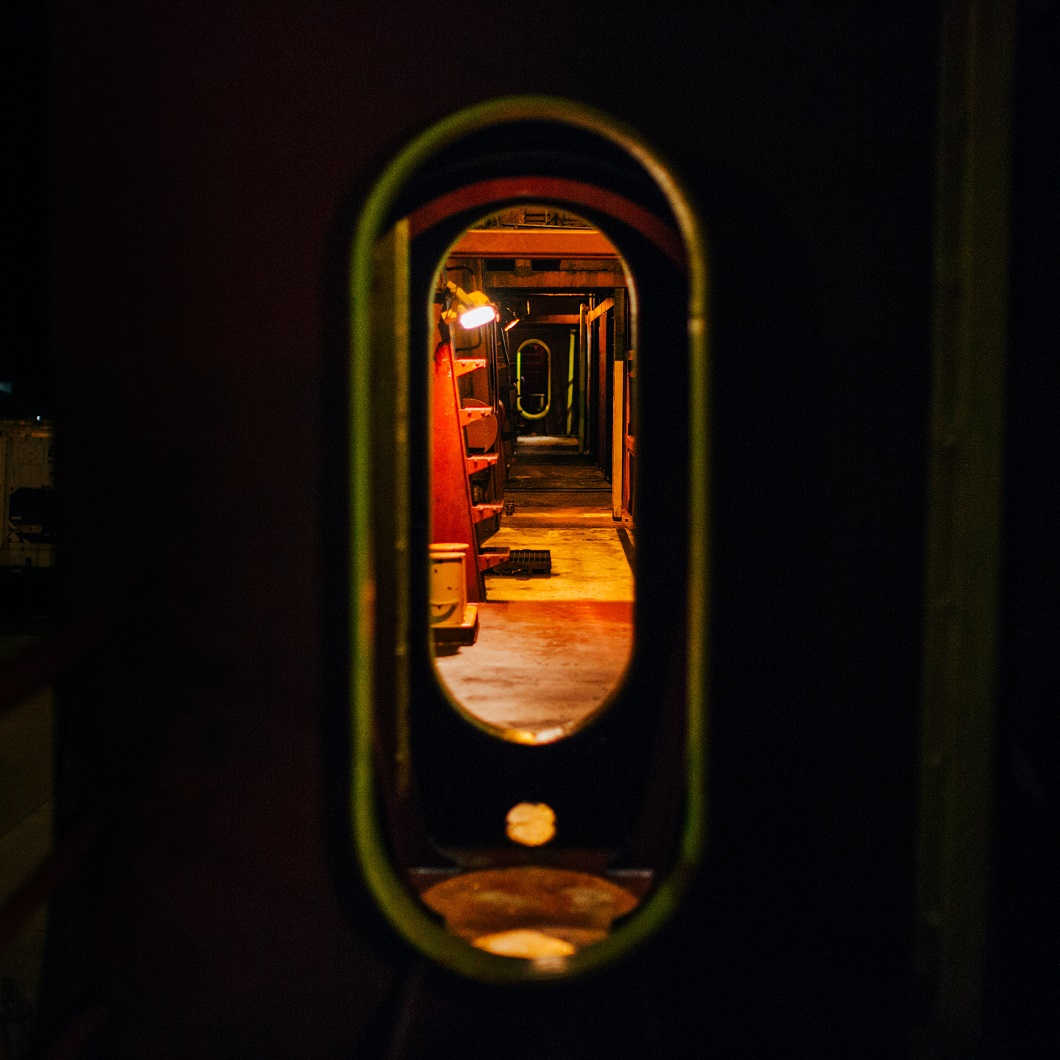 To see more photos by Justin Levesque and to listen to his podcasts, visit http://icelandx207.com.