Ernest Hemingway claimed that all true and good books share one common trait: “[A]fter you’ve read one of them you will feel that all that happened, happened to you and it belongs to you forever: the happiness and unhappiness, the good and evil, ecstasy and sorrow, the food, wine, beds, people and weather.” In his first book, One-Hundred-Knuckled Fist, Dustin M. Hoffman adds another category to Hemingway’s list of “true” experiences: hard work. His painters (“Sawdust and Glue”), construction workers (“One-Hundred-Knuckled Fist”), salesmen (“Pushing the Knives,” “Everything a Snake Needs”), refinery workers (“The Fire Chasers”), ice-cream truck vendors (“Ice Cream Dream”), and poor folk (“Can Picking”) navigate the mundane realities of laborious lives while dealing with their own tragedies and insecurities. This is a world where fathers take their sons to street fights, as in “Sawdust and Glue.” It is a world where, in “Subdivision Accidents,” painters consider dousing themselves in turpentine to support their families with worker’s compensation.

But these characters are more than representation of labor ground down by a capitalist economic system. Hoffman avoids the pitfall of Socialist Realism, in which the working-class are idealized and the narrative often obviously didactic. As the narrator of “Can Picking” proclaims, revolutions don’t make much of a difference: “Nothing changes for good.” Hoffman’s men—and they are almost all men—struggle to survive lives of endless and honest work without reprieve, and it is in this work that Hoffman foregrounds his exploration of larger concerns. Within this collection, Hoffman’s characters experience loss and regret, suffer crises of identity and masculinity, and learn to navigate modernity. They are men who have failed as fathers and sons, friends and lovers, men who flee from the past even as the past catches up.

These men have also triumphed over the quotidian and banal, decoding simple yet profound truths about existing in a gendered space. “Everyone pretends they’re bigger than they are,” Smiley observes in “Sawdust and Glue,” “and they end up looking smaller, buried in their too-large shirts.” Or as the narrator in “Ice Cream Dream” discovers, one finds freedom on the path “that didn’t need a past, only a will to drive down any new road.” With delicacy and skill, Hoffman delivers a profound and sympathetic vision of American workingmen learning to cope.

In many ways, One-Hundred-Knuckled Fist feels like an intimate book because it deals most prominently with patrimony and bloodline. Many of Hoffman’s most touching stories consider the complex and evolving roles of fathers and sons. In “Fire Chasers,” a father tries to relate to his son by taking him to watch local fires against the backdrop of a failing refinery and loss of employment, but his attempts only seem to result in the emasculation of a son he can’t understand. “Sawdust and Glue” features a father whose only remedy for the past is to give his meth-addled convict son a painting job and act as second when his son fights the biggest man on the job. “Ice Cream Dream” features a father-narrator who hates kids working as an ice-cream-truck driver to provide for his estranged children. In these stories, Hoffman considers the uniquely challenging dynamics of the father-child relationship. One-Hundred-Knuckled Fist considers the question of what makes a father good or bad in a world where happiness, and even survival, is not guaranteed.

Most stories in this collection are narrated in the first person, placing the reader squarely within the consciousness of Hoffman’s workingmen. Hoffman reconciles often-conflicting impulses of literary style and realistic content, infusing his characters’ perspectives with gritty realism and transcendent epiphany. In “We Ride Back,” a group of unemployed laborers steal tools from half-finished suburbs in the hopes of pawning them for a few bucks. The unnamed narrator describes the search for tools in language that is simple yet evocative:

These thieves are victims of the economy, the Recession, the loss of jobs and identities. Stealing is a way to fight back, to take revenge, to find an identity, even as an outlaw. In passages such as these, Hoffman inhabits the consciousness of everyday people, expertly and subtly infusing their observations with broader truths.

One-Hundred-Knuckled Fist offers fiction as truth. Here, Hoffman proposes a philosophy of work and identity that transcends the realities of the work-a-day world without crossing into the unbelievable, thus grounding his “working” philosophy in the pragmatic reality of daily life and its ordinary profundities.

Matthew Hannah is an Andrew W. Mellon postdoctoral fellow in the Obermann Center for Advanced Studies at the University of Iowa. His research focuses on twentieth and twenty-first century literature, digital technology, and media. 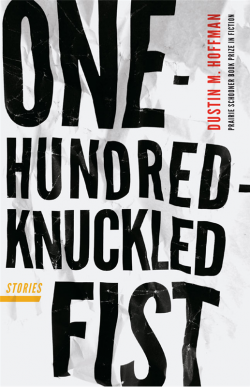