A skinny volume with a bright red cover, Sonya Huber’s new essay collection is vibrant and loud from its first pages. The collection details the speaker’s diagnosis of and life with rheumatoid arthritis and chronic pain, and addresses both the physical realities and the metaphysical concept of pain. In the opening essay, “What Pain Wants,” the speaker says, “pain resents being personified or anthropomorphized.” Of course, this statement is itself a clever and strange contradiction, hinting that the speaker is comfortable living in complex, imagined spaces. The relationship between this speaker and her pain is complicated. In the same essay the speaker converses with pain: “Pain prefers any texture in which tiny seeds are embedded. Pain shakes its head—no, it says, that is you that likes that texture—and will have nothing to do with spheres.” The imagery here is dense and evocative (those spheres, yes, but also glowing skeletons, egg yolks, cough drop wrappers, lumpy casseroles, nautilus shells), drawing attention to sensation and the response of pain at each turn.

In the essay, “From Inside the Egg,” there are moments in which the effects pain has on the process of writing are visceral, visible. “There’s a theory about the ‘gates’ of pain in the brain that shuttle signals, / but I can’t look it up right now. / I can only do certain kinds of thinking in pain. I can think through a keyhole.” Here, the simple act of not returning to ‘look it up,’ to add in the missing research is political, is the point. The speaker challenges the supposed laziness of sick and disabled people, and allows the absence of information to speak louder than any citation. In a collection incorporating so much research, this moment where the source is purposefully omitted stands out. “From Inside the Egg” is also one of the collection’s more lyrical essays. There are line breaks and sections that are right-aligned. The use of the field of the page almost ‘crips’ it, forcing the reader to contend with the language Huber has broken.

One of the longer and more explanatory essays, “The Alphabet of Pain,” covers an exceptional amount of terrain. The essay uses the foundation of the speaker’s body to engage diverse subjects, including queerness (“Pain sex is queer sex”), labor (“As a woman worker, I have had to speak up to resist the expectation that I will be endlessly available”), and the flaws of the United States medical system (“…only four medical schools in the country have a required course on pain management”). Pain is made both specific and universal, and is called out as political, as when Huber writes, “if pain were not political, we wouldn’t have torture and jails, both of which manipulate and use the body’s instinctive aversion to pain to instill fear and compliance.” This essay comes early in the collection, and lays an explicit foundation for the vocabulary (or alphabet) of pain that later, more lyrical essays (including “From Inside the Egg”) build on.

The collection as a whole may center around pain, but an almost equally present thread is that of the digital space. In “The Status of Pain,” Huber writes of a friend who mentioned the prominence of pain on Huber’s Facebook page. Researching her own life and digital history, Huber finds that this prominence simply doesn’t exist; she’s only posted explicitly about pain three times in the year before the conversation. On the decision to be ‘out’ with her illness and pain, Huber then writes, “will people automatically associate our whole beings with those moments when we are at our weakest?” The title essay, “Pain Woman Takes Your Keys,” speaks to the narrowing effect of pain on Huber’s writing process, almost confessing that “some days in the last year, all I could make was a blog post.” But then, a shift: the blog post is reframed as powerful and significant, a piece that goes viral. The essay ends with the speaker speaking in the new voice of ‘Pain Woman,’ saying “You have more options than the writerly self you think you should be writing through.”

In “Peering into the Dark of the Self, with Selfie,” Huber examines her own “pain selfies…pale olive ovals,” and the motivations behind this documentation. Much has been written about selfies. (Are they narcissistic? Do only millennials take them? And really, are they causing the downfall of modern society?) Huber engages with this conversation, through the lens of disability. “I am seeking the best light and the best side of the woman who does not have to pretend she is not in pain,” she writes. For her, these selfies and their presence on her phone are meaningful, as is the phone itself, which we’re told in “The Alphabet of Pain” serves as a conduit between the speaker and a close friend with the same illness.

“Cupcakes,” a beautiful essay about motherhood and the cupcakes the speaker doesn’t bake for her son, includes Huber again mentioning digital spaces, this time writing “I have been trying to support my new reality by following more disability activists on Twitter.” In Pain Woman, the digital space is where the speaker connects with other disabled people in ways she can’t in her ‘real’ life. It’s a space for research, it’s a space for creativity, and it’s a space for disclosure, which leads to critique from the nondisabled people around her. Just as Huber makes pain explicitly political, so does she unpack the everyday conversations with nondisabled colleagues and friends. When a friend says Huber ‘looks good,’ or a colleague mentions disapprovingly that she’s been ‘very open’ about her disability on social media, these moments are not neutral. They are moments of small but noted violence. They are microaggressions.

In Huber’s collection, pain is ceaseless. It is present in every essay. Pain’s constancy is the point. Pain is relentless, but we’re also told (in the short essay “Prayer to Pain”) that it “is not other than you.” Pain and illness are reframed as strength, as the foundations of a prosperous and privileged community excluding the nondisabled. “We cannot be cured and are therefore invincible,” Huber writes in “Welcome to the Kingdom of the Sick.” This collection does important work to lead a nondisabled audience to the water of revelation, illuminating the barriers of systemic ableism and a health care system designed to lessen time and money spent on patients. Equally, this collection does not pander to ableism. It is not always for its nondisabled readers.

Pain Woman contains moments of fantastically dark humor (“I have tried and I enjoy yoga. But if you tell me to try yoga, then I will have to fight you,” in “The Alphabet of Pain”), moments of tightly-controlled rage (“Thank you for reminding me that the world of persona and star-creation is one that excludes bodies with illnesses,” from “Dear Noted Feminist Scholar”), and moments of straightforward declaration (“I refuse to be at war with myself,” in “From Inside the Egg”). In the age of Trump, an age when the Affordable Care Act (which the speaker mentions as the reason she can access healthcare) is threatened, this book is even more important, luminous, and necessary than it was when it was published a few months ago.

Cade Leebron is a writer living in Columbus, Ohio. She holds an MFA from The Ohio State University, where she served as an editor at The Journal. Her work has appeared in Brevity, The Deaf Poets Society, The Establishment, and elsewhere. Currently, she podcasts at The Cold Take and serves as the managing editor of Us For President. Find her online at www.mslifeisbestlife.com or on Twitter @CadeyLadey 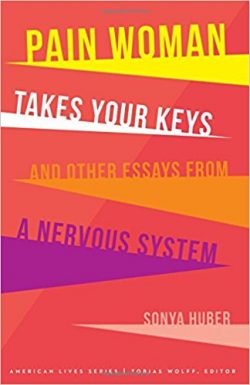