Arabella Proffer’s series Biomorphic Garden Party brings together her interests in botany, microbiology, monsters, space, disease, and the evolution of cells. We were drawn to the vivid imagery in these paintings, which suggest otherworldly hybrids of orchids, amoebas, and strange sea creatures. Soon after Arabella began working on this series, she was diagnosed with cancer, and observed that the forms she had been painting also bore a resemblance the shape of her tumor.

Art Editor Elizabeth Blackford reached out to Arabella to discuss her work. 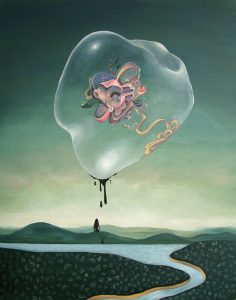 Elizabeth Blackford: When I first saw these paintings, I was immediately fascinated by their dreamlike, uncanny quality—the “biomorphic” forms are at once totally strange but also oddly familiar, and the slick surfaces and meticulous attention to detail make them feel almost real enough to touch. Could you tell us a bit more about the origin of the work in this series?

Arabella Proffer: It was strange, one day I just decided I didn’t want to paint people anymore after over a decade of doing nothing but that. I did three of these paintings with no direction. I didn’t even know biomorphic art was a genre. I think I began them the spring before my diagnosis—which was on my birthday in June—and the tumor came quite fast, so the timing was too coincidental that I began them right as this thing was growing in my leg. After seeing the MRI, my tumor was a perfect oval sphere set in my thigh, and had thin tentacles with tiny heads wandering throughout my leg. It struck me immediately that it all looked exactly like what I had painted in my first painting. I was told I had a rare 1% of all cancers and I was in serious trouble (after I was first told there was no way it was cancer and cells don’t reproduce as fast as mine had). My tumor felt like it was a part of me, it had its own set of nerves and feelings separate from the rest of my body. I wondered what those heads of the tentacles were up to, because they looked like they were on a mission, so then I got curious about macro-universe and micro-universe. Inner space aliens with their own set of rules and evolution. I thought that was cool and scary, so I decided to do more paintings! What I thought I was creating were just symbols and random pieces of nature. I think when I started to relax more the shapes began to look like organisms or cells you would maybe see under a microscope or in a bad CT scan. Letting the oil paint do what it wanted was also quite freeing and I found it would make things that looked familiar or a cool effect would come of out of it. I had also been looking at a lot of landscapes by Pieter Bruegel and Thomas Gainsborough, and wanted an excuse to incorporate landscapes in my work as a way to frame scenes in a very loose way. The nature of earth and the nature of something otherworldly, together. I didn’t want to make what I’m doing into something gross or shocking; gross is too easy—I want them to be beautiful. 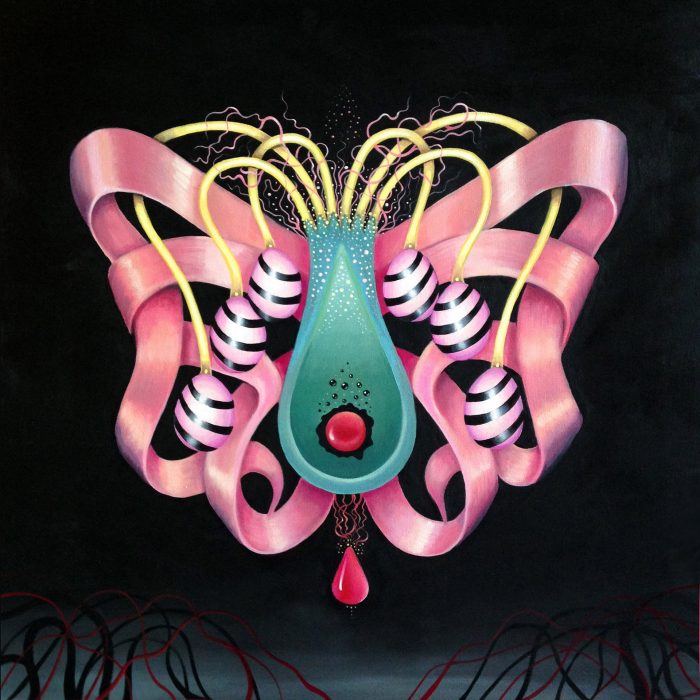 EB: You mentioned in your artist’s statement that these paintings were inspired in part by your interest in botany, microbiology, and cellular evolution, among other subjects, and that you create your own “nature” within these images. Could you talk a bit more about your creative process? Did these forms “evolve” on the canvas, or did you plan them out beforehand?

AP: They always come from a place of abstraction. I never sketch ahead of time except for the backgrounds that have something more representational like landscapes. I let the oil paint dictate what is happening so a lot of times they turn out very different in-process to the end result. They evolve naturally as they would if they were organisms on their own; whether that be here on earth, on a cellular level, or if they were from another planet. I see them as all creatures trying to figure out what they want to be, growing pains and all. I guess you could say it is like alien botany. It’s a nice break from doing anything representational where a thing has to look like a thing, or a person has to have a certain likeness. I can change things up, meander, and it isn’t “wrong” so to speak. 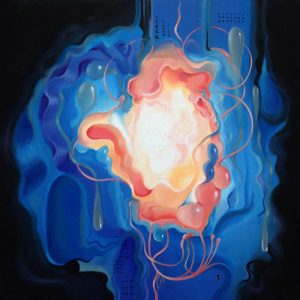 EB: I love the title of this series. Why did you choose to frame it as a “garden party?”

AP: They all have components of plant life I suppose—although people see everything from organs to chakras to gem stones in them. When I couldn’t figure out a name for what I was doing I did some crowdsourcing via social media, and someone said it was like a crazy garden party. I liked that, so it stuck. They look like they are having fun, right? 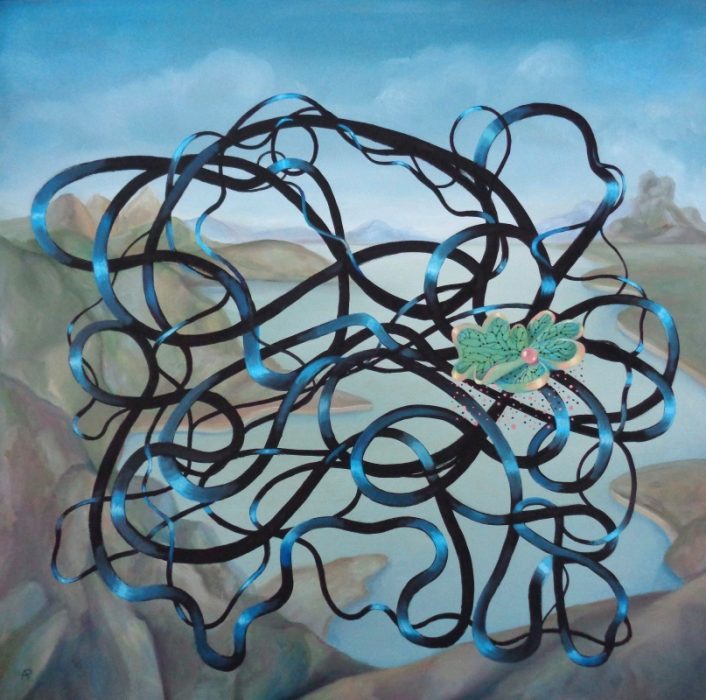 EB: You also mentioned that you began painting these biomorphic forms before learning that you had cancer. Did you continue working on this series after your diagnosis?

AP: I continued the series at a slow pace, but I had really gotten into the history of medicine and started doing research into my own cancer and old medical practices. It was a way to control my anger and feel thankful I lived in the twenty-first century I suppose. There’s a medical museum and research library in Cleveland and I decided to arrange a show in San Francisco based on my findings, so I began a series of figurative works based around that. I kept painting through treatment and my surgeries because I didn’t have much else to do and it gave me a deadline to distract me. I wasn’t sure what I was doing with the biomorphic stuff, but I decided to enter several into a show at the Baton Rouge Contemporary Arts Center and all the pieces sold. Overall the reception was really overwhelming compared to my other work, so I kept on with it. I only had a solo show of this work last year, before that it was just small batches I would exhibit in group shows around the country. Now it’s become my main squeeze; I’ve been told this seems to be my true work, not the portraiture I was already known for. 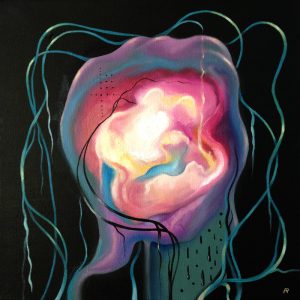 EB: Do feel that surviving cancer has affected your relationship to this series, and/or to your artistic practice in general?

AP: It’s funny because I get called ‘the Frida Kahlo of Cleveland’. I think it’s a bizarre pseudo psychic way of tapping into what’s going on with my own physiology. It’s happened twice now where an encroaching cyst or tumor was trying to kill me from the inside and I’d paint something that looked a lot like it in the imaging before I even knew I had anything wrong. It also happened when my husband suddenly needed open heart surgery; a friend pointed this out in another painting and it’s freaky, but she’s right! A few people told me I should stop doing the series because it might be the thing that’s making me sick, but I don’t think that’s the case. It’s just something I know already in some way. And I like doing them, it isn’t a struggle or some dark cathartic thing where I need to exorcise bad thoughts. Sometimes I paint bubbles because I just like painting bubbles, or drips, or I purchased a fancy new tube of paint and go, “let’s paint a lot of pink stuff in this picture!” I don’t see them as organs, tumors or cysts or leaking heart valves; I see them as creatures from some other sphere with little nods here and there to objects or nature. There’s plenty of times where I’m painting happy little trees! I throw in representational bits, but it is the burden of the viewer to decide what it is they see—and from what they tell me, it’s all over the place. It’s kind of a nice break from doing work that was so literal. The great thing about surviving what I have, is that I’m not scared of anything anymore, and I don’t take anything seriously. Everything is funny to me now, frankly. 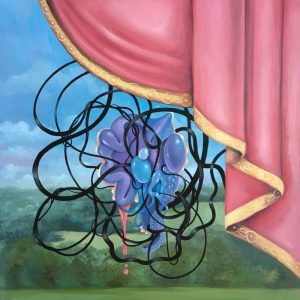 EB: Has art played a role in your recovery process?

AP: I think having exhibitions lined up helped a lot and having a deadline to work towards. I’ve had two solo shows I worked on while recovering from horrific surgeries and people were amazed I did anything. A few galleries said they could cancel and I refused because it was kind of all I had going for me. Some people thought it was ridiculous and I said, “What am I supposed to do, sit around and cry and do nothing feeling sorry for myself?” That gets old after a few days and I’m on to the next. I’ve had several surgeries where I was confined to bed against my will and I go crazy not being able to do anything but be drugged up, read, and watch TV. A lot of people think that sounds great in the age of cancelled plans and Netflix, but when it is imposed on you it’s a totally different thing. I’ve had a lifetime’s worth of Netflix and chill! I had a section of my leg removed and subsequently became partially bionic, as well as a lot of organs removed. I only just learned how to go down a flight of stairs recently, and despite the things I’ve regained, there’s still a lot of simple things I’ll never be able to do again. I think I’ve had a surgery one or two times a year for the last seven years, so I’m always looking over my shoulder. Doing the work is important because I never know when I’ll be interrupted again. Now that I’m finally entering the flow of doing this series, there’s so many more paintings I want to experiment with and make. 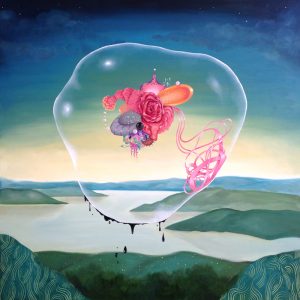 EB: Are you working on any new projects that you’re excited about?

AP: I’m currently showing work at Riffe Gallery in a really great group exhibition in Columbus, Ohio. Currently and into 2018 at The Gathering Place in Cleveland, which is an amazing organization for people and families touched by cancer. I wasn’t sure how my work would go over in a healthcare-type setting but the feedback has been fabulous; everyone sees something different, even when they know the backstory how the work began. I’ll be having a solo show of more biomorphic garden party weirdness in Pittsburgh with Boxheart Gallery in 2019, so I’ve started new work for that. I still do portraits here and there because I can’t quit them fully, I just can’t. I also did a few illustrated books called “GURLS” that has spawned a few gallery shows in cities in Germany—that’s a whole other foray and it’s been a trip.

Arabella Proffer is a painter whose loose narrative themes revolve around a fascination with punk rock, the dying aristocracy, the history of medicine, and biomorphic organisms. She attended Art Center College of Design in Pasadena, CA before receiving her BFA from California Institute of the Arts where she studied under artists such as John Mandel, Derek Boshier, Jim Shaw, and Susan Pitt. Arabella participates in solo and group exhibitions throughout North America as well as parts of Europe, the Middle East, and Australia. Her work has appeared in The Wall Street Journal, The Plain Dealer, Snob, Hi-Fructose, Juxtapoz, The Harvard Gazette, Scene Magazine, Hektoen International Medical Journal, and more. Born in Ann Arbor, Michigan, and bred in Southern California, she lives on the shores of Lake Erie in Cleveland, Ohio.