“Sky country,” as explained by the title poem of Christine Kitano’s second poetry collection, is the Korean word for heaven. It is a word used to describe the United States, and a word that underlies this book’s framing conceit of the immigrant experience. Kitano, the daughter of a Japanese American father and a Korean immigrant mother, delves intimately into her family’s history to explore and challenge this notion of paradise across the five sections of this collection.

Opening with a series of linked prose poems, the first section of Sky Country paints in lucid detail the poet’s relationship with her Korean grandmother, as mediated through language and narrative. When her grandmother tells stories of her past, Kitano writes, “My Korean is weak. I understand only pieces of what she says.” The American world which the poet inhabits also resists neat translation across a generational and cultural divide, and Kitano expresses this frustration: “I want to tell her it’s not that kind of war, but I don’t have the words.” However, in the same breath, these poems forge a connection between the two women through images, if not through language. Kitano describes her grandmother reenacting biblical stories, “rais[ing] her arms, as if in victory, to summon the Pillar of Fire and split the Red Sea”—an image that echoes the “boat, a river, and a fire” that recur in the older woman’s storytelling.

Section II of the collection is situated firmly in place: Utah’s Topaz Concentration Camp, circa the 1940s. Here, Kitano uses persona poems to imaginatively explore the internment experience of the Japanese during World War II. The collection’s third section continues to adopt the unique voices of different narrators—ranging from a prostitute, to an insomniac, to a dental assistant—and in the fourth section, the poems delve into the poet’s relationship with her parents. A series of prose poems, grouped under the title “A Story with No Moral,” links Los Angeles in 1990 with South Korea in 1958—connecting Kitano’s own childhood discomfort about her physical appearance with a story of one of her mother’s mixed-race classmates.

The fifth and final section in Sky Country circles back to the poet’s grandmother, whose experiences living in both Korea and the United States ground the collection’s narrative (and thematic) preoccupation with immigration and belonging. In the concluding poem, Kitano muses gently as a way of exit, “It is here, the bus that will ferry / you home. Go ahead, / grandmother, go on.” The collection ends planted firmly in concrete visual details, echoing and responding to the poems in section I that first introduced images as a potent form of communication within the larger, often failed, framework of language.

An essential component of the immigrant experience is the slow erosion of one’s cultural and linguistic identity, and Sky Country subtly interrogates this sense of erasure. Writing about her grandmother in section I, the speaker observes that she “knows how history can wipe away a person’s language,” and this observation is juxtaposed both directly and indirectly with the speaker’s own loss of the Korean language. In “Fireflies,” a mother teaches her daughter the Japanese word for “firefly” but wakes up the next morning to “find the characters gone, / the name on the earth already erased by the wind.” Kitano’s examination of absence and loss converges with the sense that this collection in no way tells a complete story. In writing about her father, the poet admits, “This is not the whole story, / and yet, it is true. / It is a story without an ending. / And when I open my mouth / to speak, it continues.” Both the father’s narrative and a more general immigrant’s narrative take shape through Kitano’s poems, yet also spill beyond them, too much for one narrator, one author, or one book.

On a more intimate level, Sky Country is driven by a current of longing felt tangibly in every section. Kitano conveys desire in flashes of imagery, like “a light that fails and fails to reach us” in “I Will Explain Hope,” or the men in “Lucky Come Hawai’i” who “crave your breath, your cool hands / smooth as abalone shell, your fine feet . . .” Kitano also speaks of a powerful ache, writing about dreaming of her dead father and desiring to please her mother. She encapsulates what is perhaps the heart of the collection in “Autobiography of the Poet at Sixteen,” when she states, simply and beautifully: “we are built for life, / for love, which means / we are built for pain.” Life, love, and pain converse with and long for each other across the poems of this collection. Under the unifying notion of “sky country,” Kitano invites readers to ache in the same way she aches as a woman and a daughter, in the same way Koreans ached dreaming of America as heaven, in the same way immigrants have ached trying to belong in this country. Sky Country offers pain and delight, heartbreak and love, through poems which—while rendered in exquisite language and imagery—still gesture to what is incomplete, what is unwritten, and what is lost. 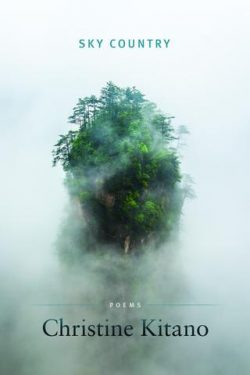