Lacy M. Johnson is a writer, professor, curator, activist, and the author of three books. Her essay collection, The Reckonings (Scribner, 2018), was recently named a finalist for the National Book Critics Circle Award in Criticism. She lives in Houston, Texas, where she teaches creative nonfiction at Rice University and is the Founding Director of the Houston Flood Museum. At Rice, Johnson advised Associate Review and Interview Editor Sophie Newman’s thesis in creative nonfiction. The two spoke recently over email about the creation of Johnson’s latest book, art and activism, intimacy with strangers, and joy as a form of justice.

Sophie Newman: Your memoir The Other Side tells the story of your kidnap and rape by a man you loved. In your title essay of The Reckonings, you explain how at readings of this memoir, audience members would often ask some form of the question, “What do you want to have happen to him, the man who did this to you?” We can frame this essay collection as a meditation on that answer, but it extends far beyond to encompass environmental and criminal justice, art, and politics. What was your process of putting all these ideas in conversation with one another?

Lacy M. Johnson: You’re right: I got that question a lot, but the thing that most surprised me wasn’t the question. It was how that question was always followed by a statement about the answer people assumed I would give: “You probably want him dead, right?” I was shocked that so many people thought I could want that, because it isn’t what I want at all. I don’t want him dead. I don’t even want him to suffer. What I want is for him to admit what he did, to my face, in public, and then to spend the rest of his life in service to other people’s joy. When I said that, people were so shocked, like it was a statement from another dimension or something, and I was shocked that they were shocked, and that feeling stuck with me. I mulled it over and over in my head: What’s with that question? What’s with the bloodlust? Then, I realized that of course people would want him dead because this is the only way we understand justice in this country: someone does something bad, something bad happens to them in return. Voila: justice! That definition of justice is a very old one, and not a particularly good one, since there are so many situations where retribution isn’t even possible, and even if it were, making someone suffer in exchange for having caused another to suffer seems like it amplifies injustice rather than cancels it out. So, the ideas and situations that I’m bringing together in this collection challenge me to think through that problem: if retribution isn’t justice—what is? What can be?

SN: A lot of the essays in The Reckonings required extensive research, which you’ve made accessible and transparent through indexed notes. Can you talk a little about how you approach research as an essayist?

LMJ: Research is part of my process as a writer and also just a tool I use to understand the world. Usually the writerly process goes like this: something bothers me enough that I start worrying about it, and the worrying about it leads me to do research in order to try to assuage the worry—as if by learning about what’s bothering me, I won’t be worried about it anymore. Sometimes I find the answer right away and the thing stops bothering me and I go on with my life. That worry does not become an essay. An essay begins when the research only partially assuages the worry, and in the gap left between the worry and the research, a question forms. Once I’ve arrived at a question, I know I’m on my way. Each of my three books has an extensive notes section because it’s not as if I just sat down and typed the book out. Each of the essays in The Reckonings, for instance, is the product of months of research, and each leans heavily on the ideas and writing of those who have come before me. My notes section is intended to honor that, and also to elaborate on secondary or tertiary narratives that were too much of a digression to appear in the primary text, but which I think provide an important and complicating layer of consideration.

SN: In addition to your writing, you’re also involved in community activism in Houston and beyond. Most recently, you were the Founding Director of the Houston Flood Museum. Does writing do the work of activism on its own, or is community involvement also essential to the process of effecting change?

LMJ: Writing is one tool for activism, but it isn’t the only one, and on its own isn’t as effective a tool for lasting, structural change as, say, organizing a community. In truth, we need both, because writing helps us to imagine ourselves as part of the same community as people we’ve never met but can imagine, and that collective imagination lends power and efficacy to the work of organizing toward our common health, freedom, and liberation.

SN: In “Art in the Age of Apocalypses,” you describe how your students struggled to find the energy to make art in what felt like end times. Could you share some of your strategies for creating when it seems at best overwhelming and at worst impossible?

LMJ: That feeling about the despair and futility of art-making is not unlike the feeling of writer’s block—and writer’s block is almost never an issue of not having anything to say but rather about the belief that what we have to say isn’t any good, that it has no value, or power, or potential. When I get that feeling, I have to remind myself of all the power and possibility art has unfolded for me. It helps to return to some of my favorite writers—those books or poems or essays that fundamentally changed the way I see the world—or to re-watch some of my favorite films, or revisit some of my favorite paintings. I am more likely to believe in the power of my own art when I experience that power in the art others have made: how art can unfold something in me I didn’t know existed, and how that brilliant unfolding thing can become a new source of power and strength.

SN: I was especially touched by your writing in “The Flood,” as I think it beautifully captures how we experience collective crises: how they can be isolating and terrifying and, at the same time, opportunities to celebrate humanity. In this essay, you touch on the idea of “the Stranger,” who, in everyday circumstances, consolidates fear, but in crisis, offers salvation. I’m curious as to whether we can re-think the presence of the Stranger in our everyday lives, and how this might relate to larger concepts of justice and mercy.

LMJ: I hope this essay does challenge all of us to rethink that idea of the Stranger, which comes to us from Georg Simmel, who writes that the stranger is not only a person who arrives in a group and does not leave, but who also represents liberation by “wandering” out of a previous context. The wanderer becomes the stranger by joining a social group that claims its boundaries are fixed, and the idea of that stranger’s presence challenges these boundaries in ways the group tends to resist. I think we see evidence of the dangers of that kind of social boundary-making in contemporary discourse about migration and immigration—“the wall” being the primary example of a fool’s attempt to fix our geographic and social boundaries in a specific space and time, as if such a thing were even possible; as if these boundaries were not shifting and changing and becoming penetrable all the time. What Simmel’s idea of the Stranger can teach us, in my reading, is how intimacy (many kinds of intimacy) challenges those boundaries, transforming the stranger from an idea—a threat, an intruder—into an actual human person, who resists the kinds of ignorant generalizations that those boundaries permit.

SN: This book covers a lot of dark and painful territory: the kidnapping of girls by Boko Haram, the Deepwater Horizon oil spill, the legacy of racism in America. Throughout these explorations, you maintain that justice is not only about hearing these stories but also about experiencing joy. Could you share some of the ways that you cultivate joy, or how we can create more space for joy in our own lives, and why that’s important?

LMJ: In the last essay in this collection, I come to the conclusion that if an injustice is anything that gets between a person and their joy, perhaps justice is anything that makes the condition of joy a possibility again. I’m not necessarily talking about happiness per se, but about experiencing one’s own power and possibility. In my own life, running has become a vehicle for joy, since running reminds me of the ways I am capable of doing and becoming more than I ever imagined, and certainly a lot more than seemed possible in the worst moment of my life, when a man I had once loved forced me to surrender my bodily autonomy to him. He was planning to kill me, but I lived. Running doesn’t simply restore that once-lost power to me but unlocks a potential I never knew I had; it teaches me to be more present in my body, and being more present in my body teaches me to be more present with my children, to laugh when they laugh, and to experience all the happiness that my life offers me. It is hard to explain what a revolution this has been for me. There is pain and sorrow and grief for the past all mixed in with joy, but also hope and momentum toward the future. When I consider the various injustices I write about in this book—racial violence, sexual violence, violence against the planet, violence that calls itself patriotism—no other model for justice seems to address all the harm that has been done. But if we believe that justice means finding a way to make the condition of joy a possibility again, then justice means we not only address the harm but also the structural inequities that made that harm possible in the first place. Working toward one another’s mutual joy would not only be a powerful act of resistance against ongoing injustices, but would also be profoundly healing for us all.

Sophie Newman is an MFA candidate at The Ohio State University and the associate editor of reviews and interviews at The Journal. 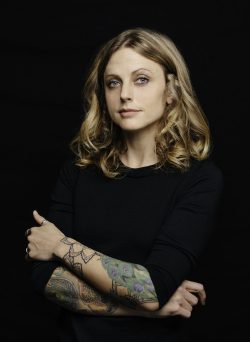 Lacy M. Johnson's memoir, The Other Side (Tin House, 2014), was named a finalist for the National Book Critics Circle Award in Autobiography, the Dayton Literary Peace Prize, an Edgar Award in Best Fact Crime, and the CLMP Firecracker Award in Nonfiction. She is also author of Trespasses: A Memoir (University of Iowa Press, 2012), which has been anthologized in The Racial Imaginary (Fence Books, 2015) and Literature: The Human Experience (Bedford / St. Martin’s, 2013-2018).