Jeff Musser creates lush, colorful paintings, drawing on photographic collages to compose fantastical portraits. The combinations of human, plant, and animal, as well as the incorporation of tattoo art, are at once visually stimulating but also violently beautiful. Art Editor Morgan Fox interviewed Jeff on his artistic process. 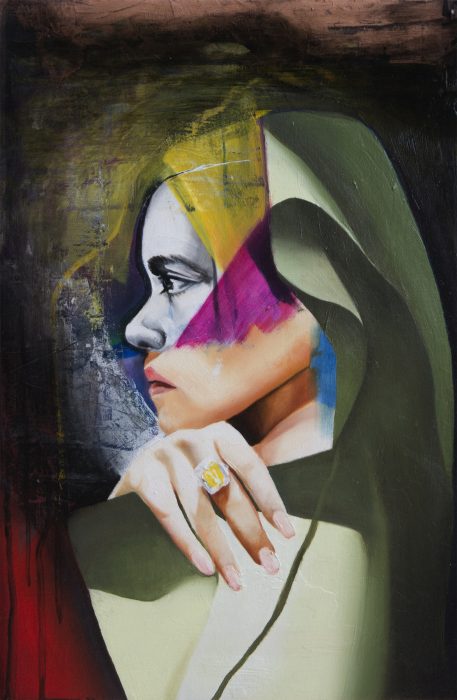 Morgan Fox: I’m really curious about the technical process of how you compose your collages. Would you mind detailing a little bit about the nuts and bolts of making a painting?

Jeff Musser: I spend a lot of time in front of my computer or on my phone, so when it’s time to work in the studio, I go analog. I use the old fashioned method of glue, scissors, paper, and my source images. I enjoy the messiness of the process and it allows me to slow down, to really think about the basic idea I’m working on. Once the collages are complete, a canvas is prepped with multiple layers of primer, then a layer of a neutral color in oil. Once that layer dries, I sketch out the collage idea in pencil or charcoal, and start building the layers. This way of working is a fairly new to me, maybe five years old. I lived in China for a short period of time and the first 6 months I was there, I didn’t have the room to paint, but I was able to make collages. Once I had a space to paint, I looked at my collages and thought, “Most of these are shit, but a few of these might make decent paintings.” 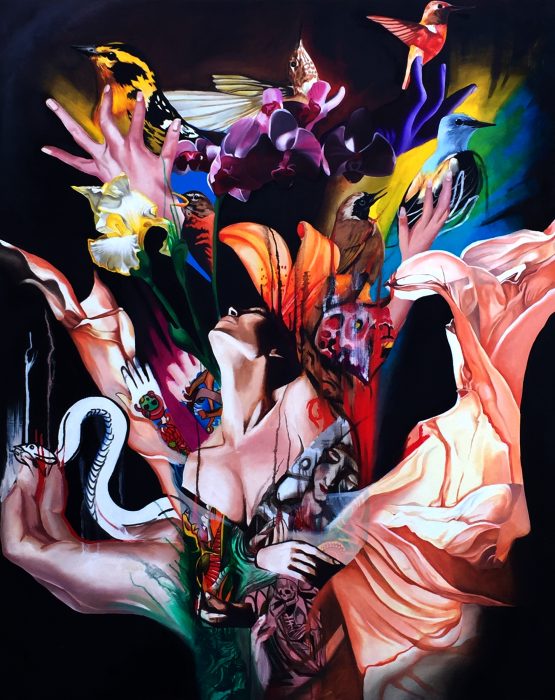 JM: The photo-based collages are mainly a first step, my version of sketching. At this point in my practice, it’s a 50-50 ratio of what is original collage and what is on the spot, in the moment painting decisions. I will intentionally leave blank or unresolved spots in the collage so that I will figure it out when I’m painting, even though this often bites me in the ass because I won’t be able to solve the problem right away. Sometimes it will take months and this adversarial relationship will develop with a particular work. One of my painting/art idols Kerry James Marshal said in an interview, “It’s supposed to get harder, and that’s not really a problem. You’re supposed to be more sophisticated and much more self-conscious. As you know more, you have to consider more. It gets harder to make the next thing, because you have to have a good reason to do it.”

I didn’t understand that concept when I was younger, I thought it would be the opposite, but now I get it, especially with the new body of work I am developing.

In the rare event that I paint in acrylic, I will sometimes use the actual source material in the work and I have used fabrics to build up the layers or add texture. But when it comes to working in oils, I’m a purest, so it’s just oil paint. 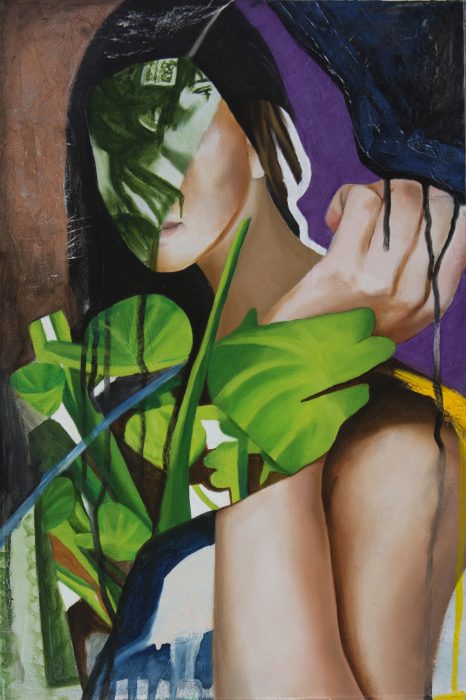 MF: One of the most striking elements of your artwork is the interplay of the human body with flora and fauna. What draws you to these forms, as well as their deconstructions?

JM: The first time I saw a slide of Caravaggio in a History of Western Art class I was hooked! The figures, the tension, the pain, the technique . . . I did not quite know at the time how I would pull it off, but I knew that the human figure and some sort of narration and storytelling would be my focus. When I was a child I spent a lot of time bird watching and observing my mother in the garden, so the flora and fauna are references to my love of nature and my love for her. 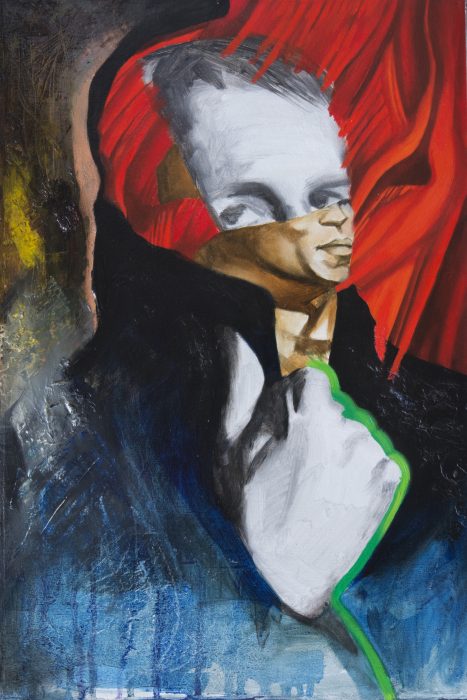 MF: In your artist statement, you talk about the process of reinterpreting memory through your artwork in the creation of a new reality. At the same time, your artwork has a very dream-like quality to it — not so much surrealist perhaps as fantastical or fabulist. Given that both memory and dream are their own capricious versions of reality, where do you see this new hybrid reality? residing? What are its qualities, or what are the qualities you hope for and from it?

JM: I’m in my head WAY TOO MUCH, plus I have terrible depression and insecurities about many aspects of my life, so painting helps me stay present and get out of myself. In late 2013, right before I moved to China, I started to put my anxieties into my work, or the very least tried to purge them through the work. The pieces, “Once The Dust Settles, This Too Shall Pass” and “The Last Two Years”, are good examples of finding that space between what’s going on inside my brain (usually doom and gloom) and how “problems” are not really problems outside of my head. 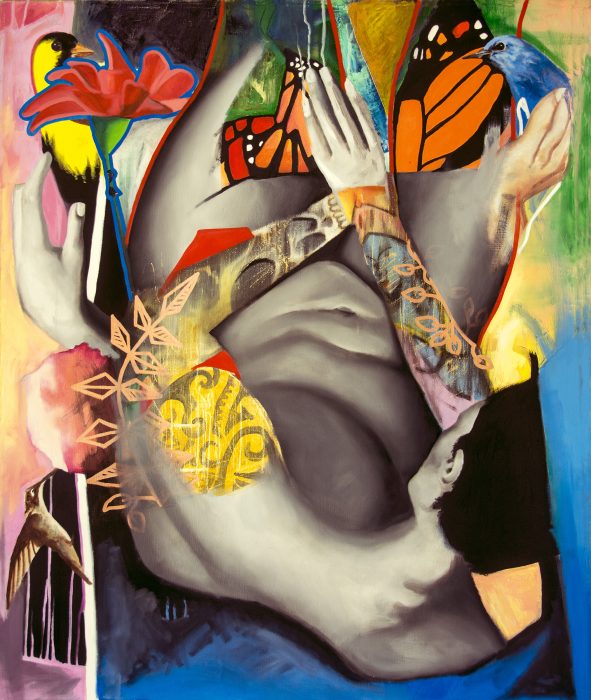 MF: You also mention the use of tattoos on your paintings’ subjects. This intrigues me, not just as a tattooed person, but as a quality of or comment on the differing layers of the artwork: the painted figure as both tattoo on the physical canvas while itself the canvas for the tattoo, and then the inherent symbolism of tattoos. What function do the tattoos play in your artwork, and where do you see them overlapping with the nature of collage (or is that something you’ve considered)?

JM: From 2006 until roughly 2012, the tattoo aesthetic was a heavy influence on my work. I made Caravaggio-esque paintings of people with all sorts of tattoos and made designs of my own that I used in self-portraits. Because I don’t have tattoos, I used the blankness of my skin to project stories in a coded tattoo form that only existed in a painting. A world within a world. It worked really well, for a period of time, but then I hit this dual wall of technique and content. 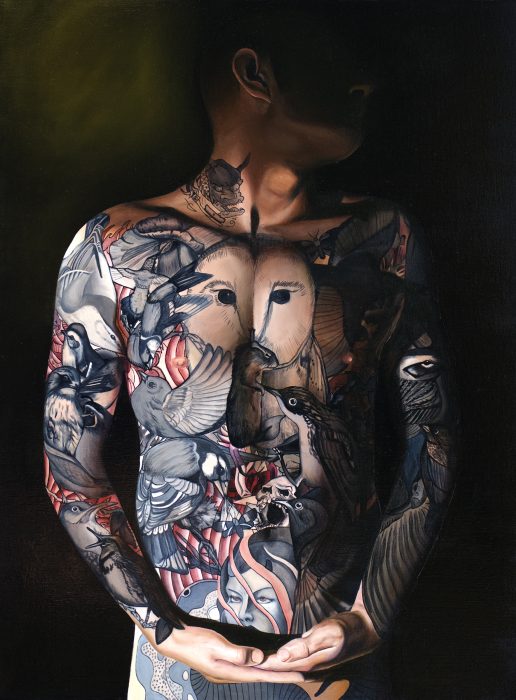 The “look how much of a technical bad ass I am” aspect had run its course. When it comes to technique, unless you take realism into a different direction like Kehinde Wiley or Christian Rex van Minnen, there is only so far you can go with it; it’s just showing off and you’re not really adding anything to the conversation.

The other challenge was my interest in tattooing itself. I knew that if I really wanted to commit to the tattoo theme in my work, to really KNOW IT, I would have to become a tattoo artist. I have a lot of reverence and respect for tattoo artists, but it wasn’t a path I wanted to go down. Toward the end of 2009, until the summer of 2010 I was also a goddamn mess. I was drinking heavily, drugs, just a fucking wreck emotionally, and it showed in the work I was making. Once I got a hold of myself and cleaned up, I dug deep and realized that my draw to the tattoo work was something larger than just admiration. Not all, but most of the people I know that are heavily tattooed are trauma survivors. The tattoos are a proxy for battle armor or they act as a sign that says, “Get The Fuck Back!” Again, this is true for some, not all tattoo enthusiasts. I know plenty of people who just love the look or love the artist or want to memorialize something with their body. For me, I was drawn to the tattoo aesthetic because I wasn’t dealing with depression in a healthy constructive way. I was trying, but I wasn’t making any progress, so the work where the tattoos are “fading” or “washing away” are the last remnants from that time in my life alongside the birds, flowers, and looser brush strokes that symbolize progress. 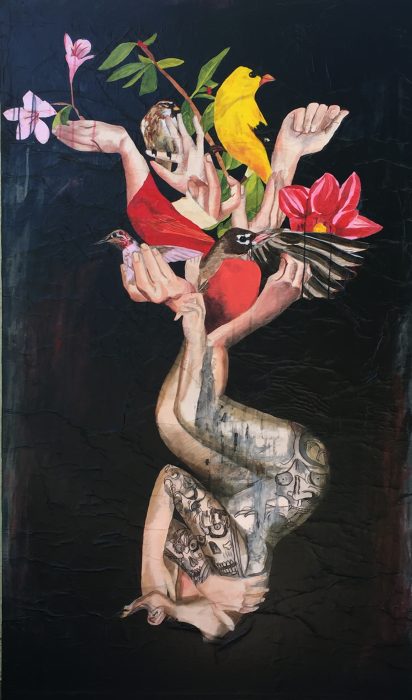 Jeff Musser’s first job after graduating from The School Of The Art Institute Of Chicago was designing Happy Meals for a now defunct ad agency in Chicago. The job paid well, but he was artistically miserable. He learned very quickly that he could not be creative for someone else during the day and keep his painting practice going at night. Something had to give. So when the rumor of layoffs within the agency started to circulate, he greeted the gossip with hope. When the layoffs became reality, he was suddenly free to pursue his love of painting. On the downside he now had to deal with issues of surviving, and how to overcome the much-romanticized notion of a starving artist. His painting style has changed dramatically over the years, but his love for portraiture and narrative figurative painting has always been at the heart of his practice. Some highlights from the last few years include: 50+ exhibitions, 6 of them solo, in museums and galleries all over the United States and abroad, representing the USA at Shandong Art Biennial (Jinan, China), placing his work in the permanent collection of The Amsterdam Tattoo Museum (The Netherlands), Siena Art Institute (Siena, Italy), Art House Sketch Book Library (Brooklyn, New York), American River College (Sacramento, California), and paintings in numerous corporate and private art collections around the United States, most notably, Oprah Winfrey, as well as private collections in France, Italy, Asia, Canada, Europe, and South Africa.