Chanda Feldman’s first collection of poems, Approaching the Fields, is exacting. Every image, every word is as precisely placed, creating poems that impress with each line but build into a complex, vivid portrait of a place and its history. Moving through time and through the stories of her own family, Feldman evokes the life along the Mississippi River—from the lush beauty of the natural world to the persistent racism that’s inextricably tied up with that landscape.

Feldman is an assistant professor of creative writing at Oberlin College. I spoke with her via email about the challenges of writing a first book of poems; the relationship between place, landscape, race, and agency; and the generative capacity of poetic form, among other topics.

Ryan Teitman: “Forget the difference / between foreign and native. Anything / can take hold here and spread,” you write in the collection’s opening poem, “Native.” Can you talk about how the poems in this book engage with place?

Chanda Feldman: First of all, most of the places in this book are geographically specific to West and Middle Tennessee, so the imagery focuses on the landscape of those areas—flora and fauna, waterways, crops, and the arrangement of neighborhoods and communities. I’m concerned with Black lives and experiences in these landscapes, which include issues of segregation, racial division, othering, and erasure. In many poems, place is dramatized through imagery, and the land itself serves as a trigger and receptacle for personal and historical memory. Land ownership and working the land is important in the poems and is also a source of tension. A lot of the time I was thinking about place as a space of threat or protection and how the boundary between those two can be shifting and porous.

RT: Can you unpack the shifting role of place as either a space of threat or one of protection? That shift is how “Native” ends: while anything can take hold, ultimately “the ground takes us in / and decay makes us kin.”

CF: I’ll try. The shifting role of place revolves around agency. Who or what has the ability to influence or maintain space in the ways that serve their needs. I can point to a poem in Section III of the book, “13. On the Porch,” in the poem sequence “But We Lived,” where a white girl comes to the home of a Black family in the middle of the night over some trouble with her boyfriend, and she’s looking for help. Yet her presence becomes a danger for this family due to the issue of race. The security of their home and lives are suddenly acutely precarious due to the girl’s appearance in their space.

It’s a similar relationship in “Native” that I’m interested in. I was thinking at the level of the physical land and also at the level of language and American history. A lot of energy goes into upholding narratives and legacies of white supremacy, and how the rationales, narratives, and outright and veiled institutionalism of it is a kind of rot. In that pushing away from something, it actually entwines you very closely, very intimately in a struggle with what is considered the other. In the poem, death seals the deal in terms of that violent closeness. And, lastly, it’s the forced adaptability of place—it’s continuously shaped, used, and remade by power.

RT: You mentioned agency and the ability to influence and maintain space. What does the idea of owning the land mean in these poems? In the pantoum “Election Day,” the idyllic holiday atmosphere of the first five stanzas—“We filled our plates from the barbecue drum. / Balloons bobbed in the air around us”—shifts abruptly at the lines “Who knows where the votes went. / The men, one by one, signed their ballots. / The man you sharecropped for chose your say.”

After stanza five in “Election Day,” the abrupt shift you mention is also a manipulation of the form, making the sharecroppers’ subjugation formally embodied. The continuity of the pantoum is ruptured when the line “who knows where the votes went” disappears from the poem because it doesn’t repeat in pattern.

RT: You mention how the pantoum is ruptured in “Election Day;” you also have a crown of sonnets in “But We Lived.” How were you thinking about using received forms and changing them when you were writing this book?

CF: Sometimes I was relying on form and structure as a generative tactic—as a way to get the next poem written—and sometimes the form seemed to announce itself during the drafting process—a pattern of repetition or a rhetorical unfolding.

In writing “But We Lived,” the drafting of those fourteen poems happened very quickly in a couple of days. They were, at first, scraps of stories and memories, and I thought, what can I do with all of these? It occurred to me that a crown of sonnets would provide enough of a relationship between each story/memory and still let them stand apart. The poems also have a stripped-down quality in terms of the language; they’re direct, casual, quick, yet biting. I thought their tone suited a sonnet sequence. At first, in revision, I assumed I’d adhere to a traditional sonnet structure, but it became clear to me that in trying to do that the tone changed. I made an agreement with myself that the sonnet would be the reference point but not the measure, and this was useful for me in revising, so I used what I needed from the form and departed when I wanted. Perhaps I gave myself an easier free-verse out in this manner, but I ended up liking the tension this created in the sequence. The sonnet is a kind of ghost there, but it is not the master of the poems.

RT: Eavan Boland, who you studied with when you were a Wallace Stegner Fellow at Stanford, has made the argument that poets don’t get to have first books anymore. Because of the contest and submission process, poetry manuscripts get their rough edges sanded off, weird or unusual poems get excised, and first books end up looking more like second books. As someone who’s just published her first book, do you feel like it’s your “first book”?

CF: There were many iterations of the manuscript, and many poems traveled in and out over the years. For sure, eight years ago, the manuscript was less thematically focused than the final book. I was satisfied with the final version of the book that I submitted to LSU Press, and still in the review stage, they suggested removing some poems, and ultimately I agreed with them—the book was stronger without a clutch of poems that were thematic outliers. The wonderful impact of the tighter focus is that the book speaks its subjects and concerns more clearly and resoundingly, but there is a loss of some of the experimentation with aesthetics and topics that was part of the process of writing a first book.

RT: What are you working on now?

CF: I’m working on some ekphrastic poems that reflect on visual art, mostly contemporary art and mostly art by African Americans. I’m also continuing to think about place in my work and my experiences traveling and living abroad.

Ryan Teitman is the author of the poetry collection Litany for the City (BOA Editions, 2012). His awards include a Wallace Stegner Fellowship, a MacDowell Colony Fellowship, and a National Endowment for the Arts Fellowship. 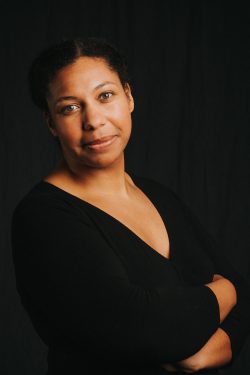 Chanda Feldman is the author of Approaching the Fields (LSU Press, 2018). Her poems have appeared in numerous journals including Cincinnati Review, Ecotone, New South, Prairie Schooner, The Southern Review, and Virginia Quarterly Review.
Chanda has received awards and fellowships from the Bread Loaf Writers’ Conference, the Cave Canem Foundation, Cité Internationale des Arts in Paris, the Community of Writers at Squaw Valley, the Djerassi Resident Artists Program, the Dorothy Sargent Rosenberg Memorial Fund, the Fine Arts Work Center in Provincetown summer workshops/Walker Foundation, the MacDowell Colony, the National Endowment for the Arts, and the Vermont Studio Center/John Pavlis Fund, and she was a Wallace Stegner Fellow at Stanford University. Chanda is a recipient of a 2016 Promise Award from the Sustainable Arts Foundation.
She holds an MFA from Cornell University and a BA in English Language and Literature from the University of Chicago. She has taught creative writing at Cornell University and Stanford University. Chanda has worked as an editor in academic and literary publishing; she is currently a manuscript reader for the Virginia Quarterly Review.
Chanda is an assistant professor of creative writing at Oberlin College.