Marathons echo across decades and centuries in Noé Álvarez’s debut book Spirit Run.  He tells the story of the 6,000-mile marathon he undertook at age 19 with Peace and Dignity Journeys (PDJ) — a First Nations/Native American movement in which participants run across North America to rekindle connections with their cultures, communities, and homelands.

Álvarez interweaves the journey of the run with stories of his upbringing in Yakima, Washington as a son of Mexican immigrants.  The marathon of the work day in the fruit-packing warehouses where Álvarez worked alongside his mother tests his stamina. He writes, “Only now, this summer, do I learn the pangs resulting from standing for long hours in a factory.  The uncirculated blood below the knees crushes my feet. I wonder how my mother has sustained this for as long as she has. Decades.” The work, like running, is physically and mentally grueling. Not only does this work set up Alvarez to endure the conditions of PDJ — running tens of miles every day with little food and rest — but it illustrates how the PDJ marathon is part of a much longer journey.  While Alvarez’s parents work in the fruit industry where “they become one monotonous shape, the shape of a worker,” Alvarez runs in PDJ to honor his parents labor and the marathon journeys they made to the U.S. His father not only made the journey once, but twice, after being stopped by immigration police and getting deported. Álvarez carries forward his parents’ work in the run and their stories in his writing, while also starting his own journey of reconnecting with the North American land that he has grown to hate — a land brutalized by corporate farming and used to wear down his own family.

Starting in Prince George, British Columbia and running all the way to the Zaculeu Ruins in Guatemala, Spirit Run, written in short chapters, moves at a rapid pace through mountains, forests, deserts, beaches, and cities. Though the narrative is fast, it retains the meditative quality of journal entries grounded in place and people. Álvarez writes, “We continue to slip in and out of society like ghosts in the night, connecting our hearts and minds with the land and the many tribal peoples who cross our paths every single day, carrying the heavy thread of prayers of hundreds of individuals.” Hazel of the Stetliem Nation invites the runners to his mountain cabin where he serves them coffee and describes his role in reoccupying land and keeping watch over the forest. A community in Oaxaca prepares a feast of beans, rice, tortillas, and frijoles. Chapito from the Fisherman People of the Seri Nation accompanies the runners on a raft to Shark Island off the coast of Mexico where he was born. These individuals and communities give nourishment to the runners’ bodies and minds. In Spirit Run, the marathon is not just about the amazing endurance of an individual, but also about the survival of family, indigenous nations, and cultures. The success of the marathon depends on community.

Álvarez’s book is also a collective narrative, telling the stories of other PDJ indigenous runners alongside his own. Through his fellow runners’ stories, Álvarez highlights the diversity within the indigenous community and the different perspectives the runners bring to PDJ.  Indigenous women’s voices play an important role in these sections. Zyanya Lonewolf expresses anger toward the truck drivers who purposefully try to run her off the road while she runs. She explains she decided to join PDJ because her cousin Ramona Lisa Wilson was murdered on the Highway of Tears — a stretch of highway in British Columbia where many indigenous women have disappeared. Another runner, Ipana, decides to leave PDJ part way through the route to help her community in Alaska protect the caribou that have provided food and shelter to her people for centuries.

Every member has their own reasons for joining the run, as well as leaving it, and sometimes their philosophies clash. Some participants believe only the strongest runners should continue the run so as not to deplete food, water, and supplies. Others call out individuals for bullying runners and creating a toxic atmosphere.  These tensions are often aired in Circle — a space for the community of runners to gather, converse, and resolve conflict. While the various runners’ stories weave throughout the narrative, they are highlighted in the prologue and the last section, “Today.” Bookending the narrative with these stories reflects the communal Circle and shows how the runners’ life circumstances have changed from before the run to after it.  These stories of indigenous runners that Álvarez intertwines illustrate how running together is an act of collective struggle and liberation. In the words of Andrec, a PDJ member, “That’s the ceremony of running.”

Spirit Run: A 6,000-Mile Marathon Through North America’s Stolen Land will be on sale starting March 3, 2020.

Louise Ling Edwards is a writer from St. Paul, Minnesota currently pursuing her MFA in creative writing at The Ohio State University. She received her B.A. from Oberlin College and has taught English classes at Shanxi Agricultural University in China and at Ohio State. 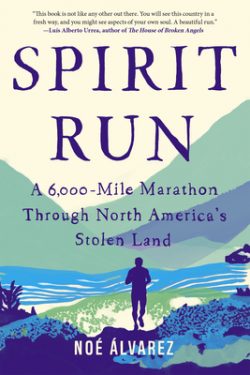