In her recent collection of prose titled World of Wonders, Aimee Nezhukumatathil explores the world’s most extraordinary forms of life whose striking characteristics often mirror and complement human experience. In a series of short essays, Nezhukumatathil introduces a range of enchanting species that have proved important in her own life.

The book begins in Nezhukumatathil’s youth in Kansas where her mother works at a mental institution. Around the institution, she recalls riding bikes with her sister beneath the shade provided by Catalpa trees. This is the first of many homes Nezhukumatathil describes throughout World of Wonders. By the end of the essay, she is an adult in Mississippi, gazing at another Catalpa tree on the campus where she teaches.

The book follows the years she spent moving around the country, first with her family and then as a young adult. Nezhukumatathil finds an intrinsic sense of home in whatever nature surrounds her, from the Catalpa trees of Kansas to the shores of the Aegean Sea, to monsoon season in southwest India. Wherever life leads her to wander, Nezhukumatathil is a willing observer, an active participant in whatever space she calls her own.

It’s as if she has scoured the corners of Earth to illustrate the creatures that make up the planet’s beauty—no stone is left unturned. Through observing and explaining the characteristics, habits, subtle and overt beauties of each creature, Nezhukumatathil often offers mirrored qualities between the species and her life. Each species offers a lens through which she views life as a daughter, mother, wife, educator, and writer.

In doing this, she uncovers some of our world’s failures and lack of insight. In describing the axolotl, what is also known as the Mexican Walking Fish, a pink salamander with a smile, Nezhukumatathil writes, “If a white girl tries to tell you what your brown skin can and cannot wear for makeup, just remember the smile of an axolotl.” In describing the axolotl’s wild, neon-lined eyes, she travels back to being in junior high, trying out “various shades of Wet n Wild lipstick, including a red the color of candy apples…” She remembers the past and current pain of forcing a smile both in junior high and as an adult professor dealing with racist colleagues. The section ends with more about the charming axolotl, whose seemingly harmless image hides its strength and enthusiasm. “And when it eats—what a wild mess—when it gathers a tangle of bloodworms into its mouth, you will understand how a galaxy first learns to spin in the dark, and how it begins to grow and grow.”

World of Wonders reminds us of our undeniable tie to the natural world, the human and non-human characteristics of all living beings. The book’s end encourages us to become active members in our world, lest we forget its intricacies and differences. She suggests we “start with what we have loved as kids and see where that leads us.”

World of Wonders is the beginning of springtime in a book—the relief after a long, lifeless, unforgiving winter. A book that comes at the perfect time for all of us—an awakening after so much darkness and isolation. To read World of Wonders is to be “shot through with bud and bloom,” as Nezhukumatathil writes. The world around me sprung from its roots with every page. We are not only reading a book about nature, but the animal kingdom’s guide to navigating human life. Nature, we learn through World of Wonders, has much to teach us.

Polley Poer is a writer from Fort Worth, Texas and currently lives in Columbus, Ohio. Her work has appeared in Madeworthy Magazine and Texas’s Emerging Writers (2018). She earned a B.S. from Texas Christian University and is now a graduate fellow in creative writing at The Ohio State University. 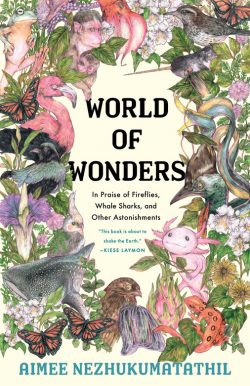