K-Ming Chang’s stories vibrate with energy, lyricism, and the hysteria that comes from the crushing weight of history. As a collection of stories, Gods of Want spans generations—orbiting relationships between women, their bodies, their ancestors, and their wild environments. There is an aura of mythic simultaneity in the work as deceased ancestors, immigration trauma, environmental anxiety, and queer relationships collapse into poignant, uncanny narratives. Chang’s writing style is musical, heady, fabulist, and straddles the line between grotesque and lovely.

As a book, Gods of Want is rich with hauntings. Its stories measure quantities by negative space and absence: what is lost, forgotten, dead—or deadish—as ghosts weave in and out of the pages. Whether it is the woman followed by a legion of spectral relatives in “The Chorus of Dead Cousins,” the aunt swaddling a potato instead of a baby in “Auntland,” the “dark jelly” inside the bellies of shot raccoons in “Dykes,” or the ghostly absence of a cousin in “Anchor,” Chang’s characters experience a full spectrum of griefs and ghosts. In response to this hauntedness, the tales become obsessed with cataloging, with lists ranging from aunts and cousins to widows, foods for the dead, and, most importantly, names. But even these names are slippery with negative space, contradiction, and layers of heritage. The story “Eating Pussy” begins: “Her name was Pussy, but the rumor was she didn’t have one.” These anxiety-inducing inventories are frantic in their attempts to bear witness to what is important before it is lost—even to memory. A conversation in “The Chorus of Dead Cousins” further expounds on the project of the stories: “We need an exterminator, my wife said, but all the ones I called were men who said they didn’t deal with what was already dead.” Men might not be willing to treat with the expired, but that is exactly what Chang’s stories do, placing a finger on the vivid intersections of loss, trauma, queerness, feminism, and the Asian American experience. As a character in “The Chorus of Dead Cousins” explains, “You can’t take a picture of an earthquake…You can only take a picture of the aftermath.”

Threading the tales together is a powerful through-line of gender and queerness as Chang’s feminine protagonists must wrestle with the expectations, duties, and dangers of their families and world. In “Xífù” a woman hounded by her mother-in-law tells her daughter:

That’s the only requirement I have: Don’t marry a man with an origin. Set his family on fire. But she tells me it’s okay, that she’ll marry no one’s son because she’s a lesbian, and I’m so jealous I could kick her in front of a car, the way I once did to the neighbor’s pit bull when it shat maggots on my feet.

The portrayal of cyclical inheritance is dynamic and bracing: in “Auntland” the narrator tells off an aunt for kissing another woman at Costco, but as an adult, finds herself in the same situation, saying “I had an aunt who saw me kiss a girl in the booth of a Burger King and said, I knew it. I knew you were supposed to be born a son.”

As a whole, Gods of Want is a glitteringly surreal collection that flirts with genres like magical realism, humor, and horror but defies the very categorization it attempts—some things can’t be measured, only experienced. Within the book, the lines between lyric essay and fiction blur with repetition and musical language, rewarding intuitive readers who allow the words to wash over them. In a 2021 Editors Panel, Chang told me, “I invented my own queer ancestors so I wouldn’t feel as alone.” Gods of Want is a culmination of that inventiveness—a full community of voices infused with their own complexities, absurdities, and desire.

Arah Ko is an Asian American writer based in Columbus, Ohio. Her work can be found in AAWW's The Margins, Hyphen, Juked, Sugar House Review, Sidereal, and elsewhere. Arah is an MFA candidate in Creative Writing at The Ohio State University where she serves as Art Editor for The Journal. Catch her at arahko.com. 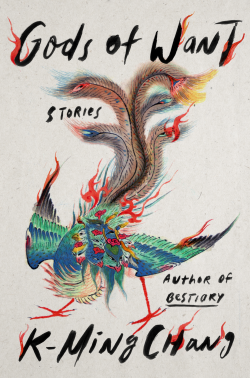