Corey Van Landingham completed her MFA at Purdue University, where she was a poetry editor at Sycamore Review. Her poems have appeared or are forthcoming in Best New Poets 2012, Colorado Review, Crazyhorse, Hayden’s Ferry Review, Indiana Review, Kenyon Review, The Southern Review, Third Coast, and elsewhere. Van Landingham’s book Antidote won the 2012 OSU Press/The Journal Award in Poetry. Recently, she spoke with poetry editor Michael Marberry about her prize-winning manuscript and the challenge and excitement surrounding the construction of a first book. 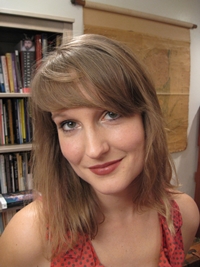 Michael Marberry: First things first: Congratulations on winning this year’s Wheeler Prize for Poetry, awarded by The Ohio State University Press and The Journal! This is your first poetry collection, correct? Having spoken with the judge (Kathy Fagan), I know that this year’s decision was a very difficult one, as we received well over 500 manuscript submissions. What was it like to receive the good news from Kathy that you’d won the Wheeler Prize?

Corey Van Landingham: Thank you so much, Michael! This is indeed my first collection and, hopefully, not my last. As for the phone call with Kathy, it was, of course, the best phone call of my life. As soon as she said who she was, I started sweating profusely. She said her name might not mean anything to me, and I wanted to say, “Your name means everything to me!” I have no idea what I actually said to her, only that she was so kind that I was in tears and, honest to goodness, had my hand over my heart the whole conversation. After we hung up, I made the requisite phone calls, continued sweating, brushed my hair and my teeth, and blasted “A Milli” by Lil Wayne because, apparently, that seemed appropriate at the time.

What I’m trying to say is that I was so incredibly happy and honored that I had no idea what to do with myself. I am in love with Rebecca Hazelton’s gorgeous book Fair Copy, last year’s Wheeler Prize winner, and I couldn’t be happier and more humbled to be in her company at OSU Press.

MM: I’m sure that I’m not just speaking for myself when I say that titling a book seems impossibly difficult. (I have trouble giving titles to individual poems, let alone to an entire collection!) Your book is entitled Antidote, which is also the title of one of the poems therein. How did you decide on this particular manuscript title? What does the title mean to you? How do you see the title working in unison with or in tension against the poems in the collection?

CVL: Yes, this whole business is impossibly difficult. I have always struggled with titles. I think maybe one of my titles received the go-ahead during my MFA workshops, and titling my manuscript was grueling. Long titles have always captivated me—I love their inherent poetry, their rhythm, their complication—and I tried to emulate these titles that I so admired. It wasn’t until The Great Title Breakdown of 2012, as I now call it, that I realized perhaps a long, abstract title wasn’t quite right for my book. All this happened while I was in Vermont at the Bread Loaf Writers’ Conference, and I must have bugged the hell out of my dear friend Brittany Cavallaro, as I rattled off title after title to her for days.

As soon as I wrote down the word “Antidote,” however, something felt right. The strange thing is that it comes from a phrase that didn’t feel particularly representative of the book: “The antidote to all those pills she was taking.” But the more I thought about the idea of an antidote, how it conjures up danger and the sinister in its unmentioned nod to poison, the interesting wording of an antidote being given against something, the more I liked it.

I actually wrote the poem “Antidote” after I found the title, and it helped solidify the various tensions the title holds for me: poetry as a possible antidote to mourning; poetry as an impossible antidote to mourning; the fact that nothing can be given against lost love or guilt or death or the myriad other incurable afflictions that we face. For a book that has so many various tones and speakers trying to approach valediction through different forms, Antidote felt like it encompassed all of them, as if each “I,” “you,” “she,” “he,” and “we” was an attempted antidote against the feeling of futility.

MM: Tell me a bit about how the manuscript came together—i.e. how you selected which poems to include, how you decided on the overall organization, etc. What sort of guidance did you receive during the process of putting together the manuscript? In retrospect, was there a specific piece of advice that you received that stands out as particularly instructive, helpful, or formative for creating your book? Were there other poetry collections that influenced the construction of your own collection?

CVL: My incredible mentor at Purdue University, Donald Platt, was invaluable in the process of putting together this manuscript. One evening, we met on campus with all the poems that I wanted to include and, one by one, spread them out on a long conference table. At the time, the manuscript had three sections, and my homework was to have picked the poems that I wanted to begin and end each section. From there, we built each section from each end, moving slowly toward the middle. The physical process of standing up and seeing each poem together, of reading aloud last lines and seeing the different formal patterns of each poem next to each other helped immensely.

After I removed the sections, though, I still saw the manuscripts as being in parts—mainly because of having three poems titled “To Have & To Hold,” three poems titled “Valediction Lessons,” and three elegies. The entire time that I was working on putting together the manuscript, I wanted to avoid its becoming a project book. Don’t get me wrong: I think those can be beautiful and luminous and quite valuable. But I didn’t want it to be a dead father book or a breakup book or a surrealist self-meditation book; I wanted it to be all those things. The simultaneity and multiplicity of themes kept me interested, kept me motivated, and prevented me (I hope!) from writing the same poem again and again. But, in a way, this made the entire process of choosing poems more difficult. In the end, it came down to pairing and contrasting tonal registers and, I’ll admit, trying not to have too many couplets together. Poems that could not go into the book: anything too hopeful, anything without a fairly strong speaker or lyric voice, and anything that strayed too far from landscape or place.

I gave myself the task of reading a lot of first books by women poets, and I know that many of them have been quite influential—especially Anna Journey’s If Birds Gather Your Hair for Nesting, Nicky Beer’s The Diminishing House, Traci Brimhall’s Rookery, Arda Collins’s It Is Daylight, and Mary Szybist’s Granted. Though it’s not a first book, the most important book for me while writing and organizing my own book has been Joanna Klink’s Raptus, though I’m sad now that I can’t have a Kiki Smith drawing as cover-art. Have you read Raptus? Go buy it. Klink is a genius when it comes to creating a collection of poetry. (You’re welcome!)

MM: Last question: What advice would you give to other poets putting together that first book manuscript?

CVL: When approaching the manuscript, allow yourself the same strangeness, intuition, danger, magic, and otherness that goes into writing a poem. Remember that you are a poet, not an architect. It should be fun. You should stand up while organizing it. You should drink wine. And you shouldn’t just do what anyone else tells you to do.

Michael Marberry is a graduate of Lipscomb University and the University of Alabama. His recent work has appeared or is forthcoming in Indiana Review, Third Coast, Guernica, Linebreak, Passages North, Harpur Palate, and elsewhere. He is the poetry editor of The Journal.