At the beginning of the summer I intended to be virtuous. I would go running every morning! I would make myself beautiful salads for every meal! I would wake up in time for the farmer’s market to furnish those salads with organic local vegetables! I would write two thousand good words every day, revise everything, maybe start up on a novel in my spare time. (I actually publicly announced these plans, and very kindly my friends refrained from telling me I was full of shit.) I also made myself a healthy book list, stitched together from my friend’s recommendations. That list contained stuff like A Hologram for the King and Gilead and A Suitable Boy and Nabokov’s Despair.

Yeah, I didn’t do any of that.

Here’s what happened instead: my roommate and I decided to adopt a dog, and I read a lot of books about dragons. It started in May. My roommate and I spent hours every day refreshing the local animal shelter’s website and cooing over the pictures—in a purely theoretical way, obviously—and I wandered into the Young Adult section of the public library. I found Robin McKinley’s Dragonhaven which is kind of a weird book, objectively speaking. 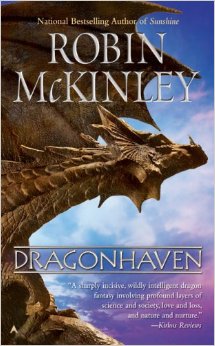 It’s set in an alternate reality where enormous fire-breathing dragons exist, but aren’t any more magical than elephants. McKinley pays delightfully obsessive attention to the details of a dragon-having world—there are dragon poachers, there are weird federal regulations concerning dragon flight, there are dragon tourists and dragon activists and dragon scientists. The book’s main character is a teenage boy living on a dragon preserve. Although it is very illegal, he ends up raising a baby dragon from an egg. It’s a pretty lengthy book, as YA goes. At least 60 percent of it is devoted to incredibly detailed descriptions of dragon-raising. We know everything about this baby’s development, about the texture and stink of her snot, about her weird dragon smell that permeates the entire camp, about how hot she is to touch and what kinds of warbling noises she can make. The book goes so far as to provide graphic descriptions of cleaning up dragon poop. The plot, such that it is, is off-handedly dealt with in about twenty pages. I ate it up. I ate it up with a spoon.

“It’s the best book I’ve read about dragons maybe EVER!” I posted to Facebook, stars in my eyes. A list of books about dragons that are Better Than Dragonhavenwere aggressively posted to the comments section, because it turns out many people bear strong opinions about the books they loved in middle school. I collected all the rival dragon books and idly added a few to my reading list.

My roommate and I started pestering our landlord about drawing up a pet addendum to our lease. We began visiting shelters—it turns out Columbus, Ohio boasts an unusually high number of animal shelters and rescues and humane societies. We visited them all, a heartbreaking parade that’s sort of like visiting hours in a prison but also sort of like going on an OKCupid date. We researched dog breeds obsessively all through June. We devoured Cesar Milan. We devoured Cesar Milan criticism. “Beagles can sometimes spray a poop mist into the air when they become afraid,” my roommate reminded me when I decided we needed a beagle. “Dalmations are assholes,” I reminded her when she cooed over a polka-dotted mix breed. We stewed in our own anticipation. I reread Patricia Wrede’s Dealing with Dragons (a charmingly ironic fairytale), The Hero and The Crown (another McKinley book, this time about a girl who slays a very monstrous dragon), and also Kitchen by Banana Yoshimoto and The Virgin Suicides, because I still had a tiny shred of respectability at that point.

After about two months of Process, we decided on a dog on a Friday morning just before my roommate had to go out of town for the weekend. She’s a shelter dog of dubious origin, but she’s definitely got some dachshund and German Shepard in her genetic cocktail. The general impression is soft bouncy wriggly puppy. We met her, named her, bought her some stuff, and then my roommate drove off, leaving me and the dog alone in the apartment.

The dog was affectionate but wigged, like all newly adopted dogs probably are. She made tragic little sounds like a squeaky toy being aggressively massaged if I left the room, so I decided not to leave her alone. She slowly puzzled out a private game of fetch, kicking a tennis ball across the floor and then chasing it. I took about five million pictures and started my newest dragon book.

In His Majesty’s Service by Naomi Novik is not young adult fiction. In His Majesty’s Service by Naomi Novik is a painstakingly historically accurate what if. Specifically—what if the Napoleonic wars were fought with dragons? A Navy captain takes a French prize (the Amitie, a historical ship that really would have been sailing near Portugal in 1803)—and discovers a dragon egg in the hold. The book’s central drama revolves around the friendship which develops between the captain and his dragon. But mostly, the book—and the eight sequels that follow—are concerned with their daily lives. We learn exactly what dragons eat, how dragons sleep, what different kinds of materials can be used for dragon harnesses, how dragon aerial warfare should be fought, how dragons are hatched, how dragons mate, whether or not dragons fall in love. The daily lives of these dragons include participating in battles against the French and traveling to various exotic locales, but the plots remain focused on the minutiae of existence with draconic company.

I read In His Majesty’s Service in one night, lying on the floor next to my dog’s crate so she wouldn’t cry. (She cried at first whenever I was out of her sight—including when I tried to sleep on the bed and she couldn’t quite see me from inside her crate, beside my bed.) “This is the best book I have ever read,” I thought with a rush of three-am devotion, and reached through the little bars of the crate to stroke my dog’s floppy ears.

By the warm light of day, I feel like maybe I’ve read better books. But I did devour the series whole in about two weeks—two weeks spent teaching my dog “come” and “sit” and “drop it” as well as discovering that she sleeps in the weirdest position ever, legs splayed open and front paws curled up and spine bent into a half-moon. “Most Chinese dragons prefer their meals cooked and served with rice,” I told her when she refused to eat a Dorito. (What kind of self-respecting dog won’t eat a Dorito?) “She’s exactly like an Incan herding dragon in that way,” I told my roommate when our half-German Shepard herded us onto the couch with obvious satisfaction. (My roommate started reading the series in self-defense after about a month of this.) We converse with great interest about the long hairs that grow between her toes, about the little green stripe of scar on her stomach, about her white teeth and the state of her poop and the weirdness of sometimes seeing her inner eyelids close when she falls asleep. It’s all riveting.

“You’re a fire-breathing monster,” I tell my dog, patting her belly. She pants happily in my face, and licks my ear. “I could just eat you up,” I say, and wipe away drool.

(In hindsight this list wasn’t even that high falutin’ but it had some variety I guess.)

An incomplete list of actual books read this summer:

Molly Olguin received her BA from Williams College, and is currently an MFA candidate at The Ohio State University. She teaches composition and works as an associate online editor for The Journal.