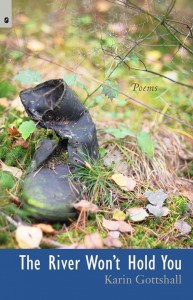 The Journal and The Ohio State University Press are thrilled to announce the publication of Karin Gottshall’s new collection of poems, The River Won’t Hold You. Gottshall was the winner of the 2013 Wheeler Prize in Poetry. Laura Kasischke calls The River Won’t Hold You “a haunted, burning house of poems,” and Wyn Cooper calls the book “a circus of delights not to be missed.” The book is now available for purchase.

Karin Gottshall lives in Vermont and teaches at Middlebury College. Her first book, Crocus, won the Poets Out Loud prize and was published by Fordham University Press in 2007. She is also the author of three independent press chapbooks. Her poems have appeared in Blackbird, Crazyhorse, FIELD, The Gettysburg Review, and elsewhere.

Haunting and haunted, The River Won’t Hold You interrogates loneliness and loss with quiet insistence. In poems fashioned at the difficult intersection of imagination and experience, Karin Gottshall seeks an uneasy solace in the mysterious gaps between them: “I tell myself I can be content with the pleasures / permitted ghosts,” she writes in “Afterlife,” “but my body wakes up / leaking saltwater, and won’t let my ghost-self be.” Poetic structure and the music of language offer a seductive repository for memory, philosophy, and pain. These poems are generous in both their formal approaches and their palettes of sound and silences. But Gottshall never settles for an easy or artificial solution to the questions her poems ask; the beauty of her work comes, instead, from the directness of her gaze and the images that gaze fixes itself upon: “Wide-open, staring eyes of the tiger / I drew and had to destroy because it wouldn’t sleep.”

The 2014 Wheeler Prize winner is Talvikki Ansel for the collection Somewhere in Space, due out this fall. Submissions for next year’s Wheeler Prize in Poetry will open in September of 2015. For submission guidelines, please visit http://english.osu.edu/creative-writing/journal/charles-b-wheeler-prize.