In the not-quite-dream, I cooked
for you, wearing nothing
but an apron – light
-thirsty, in the window’s thievery
of autumn, you held me & there was no need
for sound there – in that life,

you choked me & both of us
wanted it. In that life,

neither adam’s
apple, nor stilleto’s heel, but the choke between
two knotted forms of surrender –

tell me about the drowning
city of you, of flood & lung
puncture; how we familiared
the familiar until we became
unrecognizable – my face
contorted into every every

–thing & no face at all; two
roads neither con- nor die-
verging, but parallel – I could make
a sad & failed canon from all that was
unspoken between us: slip

of. Automata of. Petals pressed
into. Follicle of. Crushed
pipe of. Gorge and. I could go

all night if you let me – the road’s long
babe, might as well buckle up & call it eternity

you were a window –

George Abraham (they/he) is a Palestinian American poet and PhD candidate at Harvard University. They are a Kundiman fellow, a board member for the Radius of Arab American Writers (RAWI), and the author of Birthright (Button Poetry, 2020). 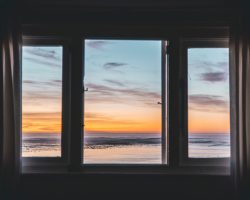