I’m in the principal office for giving this boy
a knuckle tap to the temple & his mama there
and my mama ain’t. The principal ask what
happened, say ladies first. Smile. So I say I
was wearing my gym shorts & minding my own
business & he say that ain’t what happen. I cross
my arms ‘til principal say go on. So I tell them
about how he shoulda never been looking
at my behind cuz ain’t nothing there for him.
& how even if he just happen to see something
he don’t know me like that to go picking it off.
& how come if he so innocent then why was him
& them other boys laughing, huh? & his mama look
away, wrinkle her nose. The boy say he just was
being nice & I wanted him to touch me. I say Naw.
His mama narrow her eyes a little bit. & the principal
ask where my mama at? & I shrug, don’t say nothing
‘bout how some people literally don’t have no time
for this shit. The two of them look at me like I shoulda
never been wearing the shorts no how. & I think
they all I got. I look at his mama looking at me,
saying nothing. & I wonder whether she making
a generation of boys like this here principal.
& the principal ask why come my shorts so short.
His mama say that ain’t the question here. She grab
the boy ear & twist it, whisper all up in his skull. He say
I didn’t mean it. I ain’t raised to be no boy that hurt people.
I say I don’t want no boys hurting me.
He say I don’t wanna be a boy that hurt people.
I say don’t hurt me.

Therí A Pickens, PhD has written two monographs including Black Madness :: Mad Blackness (Duke 2019). You can find her on Twitter (@TAPPhD) and her website (www.tpickens.org). She is a Professor of English. 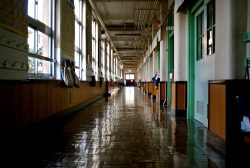