I. JANE DARK ADDRESSES THE HUSBAND

At the time, you were eating dinner and the light had
already grown dim.  But almost everyone else on your
cul-de-sac watched as I tore the flowers, one by one,
from the ground.  A display of emotion might go on for
hours, sometimes days.  The first time, you threatened
suicide, and the second, murder.  And so I came to
understand there are uses of a word that don’t have
anything to do with money.  A heap of dead aster, a bit
of music.  The train veers off its tracks, destroying the
car and its twenty-seven passengers.  Years later, they
realize the work I had been doing was intended for you.

So the work went on and on.  Little basket of thorns,
boredom and its exhausted mistress.  By then, even I had
forgotten what he looked like.  That was the beginning
of the fin de siècle, a door latched shut and the plaster
crumbling all around me.  Which is to say, I’ve never
understood the difference between “dying” and “dead.”
And if I did, I wouldn’t admit to the tiny spoons, the
shattered glass, the silver key found rusting at the bottom
of the lake.  Here all of the clocks are missing their
pretty enamel faces. And look, another bird fleeing the
kingdom, on her way to an orchard near the coast.  When
she takes her first bite of the apples, I hope she chokes.

You were prettiest lying there in the snow. Familiar
interloper, beautiful rival.  Holding the same box of rusted
nails and blunt knives, blaming yourself for the housefire.
But the night ferry was the beginning of the end, really.  You
claimed the ocean didn’t mean anything, but you couldn’t
tell blue orchids from that cut-glass city waiting for me on
the other coast.  Even if you learned the difference, I would
never hand over the key.  But here are all the letters, money
for some postage, and directions to the garden.  You can
still plant tea roses there, if you remember how to dig.

Kristina Marie Darling is the author of over twenty books of poetry. Her awards include two Yaddo residencies, a Hawthornden Castle Fellowship, and a Visiting Artist Fellowship from the American Academy in Rome, as well as grants from the Whiting Foundation and Harvard University's Kittredge Fund. 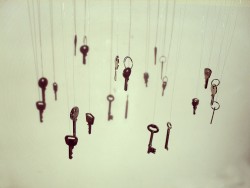