I’m almost positive I’ve got what it takes to become a saint
!50!because I’ve stopped breaking what I can’t afford,
!50!and if I look up for long enough, everyone looks up.
Are there any lemmings that refuse to mate because they

know that the overcrowding of their burrows and the sound
!50!of a thousand offspring scritching up the tunnels will
!50!drive them, panicked, off cliffs and into the ocean?
Little rodent virgin saints. It’s the same with us—scientists

in the 70’s predicted that by the year 2000 we’d be living off
!50!kelp. We take so much from the sea already. In Italy,
!50!the last known sea silk weaver prays while she turns
mollusk spit into golden thread, The sea has its own soul,

and you have to ask permission to take a piece of it. She’s
!50!a saint without even wanting to be, and here I am
!50!stuffing plastic diamonds up my nose and waiting
in the park for joggers to notice my light-reflecting breath.

I believe those who believe that the greatest comedians
!50!are the ones who’ve suffered most. You know, Saint
!50!Lawrence cracked jokes while being roasted alive.
There were so many storms the year I turned five, I forgot

what windows looked like unboarded. After hurricane Andrew,
!50!I watched from the porch as my brother canoed into
!50!a downed wire. I wonder if we name storms because
naming is the only power we’re left with. Give me more time

and I’m sure I could make this funny. Recently, people learned
!50!that prayers reach heaven fastest by balloon. The party
!50!stores have turned into churches, and I can’t afford
the inflated prices. Was that a good joke? Yes, maybe I could

be a saint. I just hope I’m forgiven for the nights I spend
!50!on the fire escape, untying this city’s prayers long
!50!enough to hear the first few words. Each one
starts the same, Make this mine, Lord. Make this mine.

Paige Lewis is the Copy Editor at Divedapper and an Assistant Poetry Editor at Narrative Magazine. Their work has appeared or is forthcoming in The Cincinnati Review, Columbia Poetry Review, The Greensboro Review, Smartish Pace, and elsewhere. 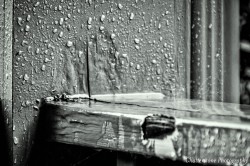