The bedazzled tribe of yahoos has returned
with a new too-tanned, top-heavy prize bunny
swishing her porny French manicure ‘round a Frigidaire.
Monty’s boorish plaid: swapped for Wayne Brady,
dapper in gray. A woman dressed like a bumblebee,
penciled brows arched in permashock, weighs her options:
a bright pink bow-tied box, or the unknown thing
behind curtain #3. She squints into the din of hoots,
wrings her hands. Life could be made easy in an instant.
“I pick the curtain.” Attagirl. The box was a gag: a ham
with straps attached to it. A ham bag. Get it?
Wayne takes a bite to prove the meat’s really real
and the audience goes totes bonkers… we’re interrupted
by news of the hurricane. U.N. delegates have gone on
hunger strike until “a meaningful outcome” is reached.
God, give us one hundred more years until the dawn
of the Kingdom of Roaches, until the sea reclaims Death Valley,
until the end. Hey, what kind of poem is this? Behind curtain #3:
a combo washer-dryer bright as a mirrored iceberg.
Bee lady does a shrieking pogo while a guy in a dinosaur
costume mouths, “I love you, mom!” into the camera.
It’s that kind of poem: a poem for the end of the world.

Jennifer L. Knox latest book of poems, Days of Shame and Failure, is available on Bloof Books. Her poems have appeared four times in the Best American Poetry series as well as The New Yorker, American Poetry Review, and McSweeney's. Jennifer was born in Lancaster, California—home to Frank Zappa, Captain Beefheart, and the Space Shuttle. She currently teaches at Iowa State University. 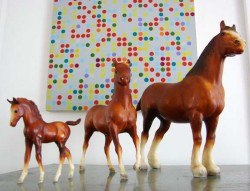